Looks like the tax avoidance game Taxodus, which we spoke about on this blog last year, is to be launched later this week by VPRO Television. Curious to see how far its got. 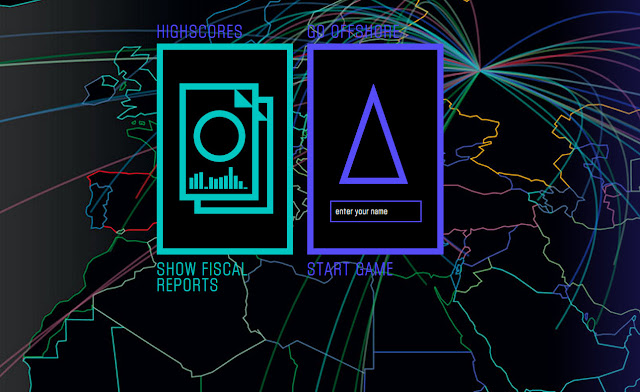 from this blog June last year.....


Femke Herregraven is a Dutch designer who recently gave a presentation at www.curatingreality.nl, together with Siem Eikelenboom and Gaby de Groot. She was one of 8 groups that presented plans as a result of a 3 month workshop organised by the Sandberg Design Centre and the Netherlands Media Fund. I attended the presentation on June 7th 2012. 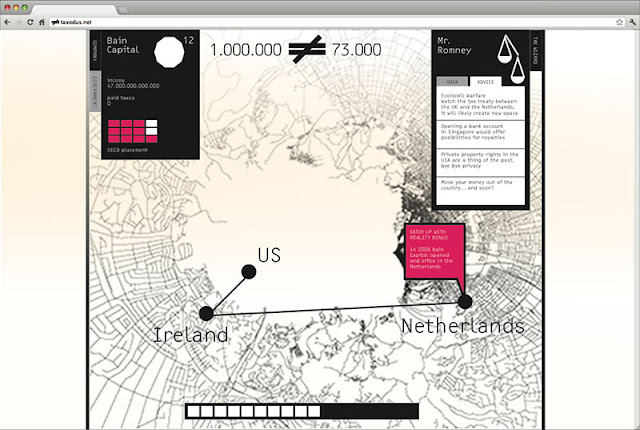 Femke presented a project called Taxodus, an online game where you're given so much money by your client and your task is to invest offshore for maximum profit. Note that the project has passed the project proposal phase, but has not yet been commissioned. Below is a Google translation of their Dutch text.

Taxodus - Approximately 50% of world trade passes through tax havens and 83 of the 100 largest multinationals in the Netherlands for tax reasons. Flows seek the path of least resistance - but what are those roads in the year 2012? When we often think of tax havens with bank secrecy countries where celebrities mafiosi parking their money. British investigative journalist Nicholas Shaxson with his recent book, Treasure Islands, however, demonstrated that this offshore system not "exotic sideshow" but the very core of our global economy. They are the rich OECD countries like U.S., UK, Luxembourg, Ireland and the Netherlands are the largest players in the offshore system - they provide numerous opportunities for multinationals to escape financial regulation in their own country. Still, extent and impact of this offshore system long remained under the radar. Firstly because there is much discussion about the term 'tax haven' politically very sensitive. Secondly, because we only just snapshots of the offshore system see, there is little insight into its present geography.

Taxodus is an online game that tries to bring change here. Based on existing data such as tax treaties and tax regimes between countries is a strategic landscape design. Players choose a multinational company or bank on whose behalf they attempt to evade the most tax. By using letterbox companies worldwide to set up business with banks as well as lobbying local politicians, the player lays bare the potential to escape financial regulation. The game is free to play, but at the end of every game played, the tax route taken using Taxodus is uploaded (anonymously) to the database. Firstly it acts as a database of the highest score which player has evaded taxes. But it also acts as a public database of potential routes for each multinational. We think its a useful starting point for a journalist to investigate and verify what routes are really plausible and which not.

The avoidance of taxes is not an exception but the norm. It has a powerful shadow economic system created that Shaxson describes as "the secret under pinning for the political and financial power of Wall Street today". The purpose of Taxodus is connected by means of the crowd-sourcing this hidden offshore system and thus to give it a public face.


UPDATE: Got this release from Femke this morning.

I want to tell you about my project Taxodus – a web based serious game on corporate tax avoidance. The beta-version has been developed in the last few months, and in response to the game Marije Meerman made the Tegenlicht documentary Tax Free Tour.  Jeroen Schellekens & Mark Visser from Motoko made animations inspired by the game, and Martijn van Boven did the sound design. This documentary will be broadcast today (Monday 25th) on the public channel NED 2, at 20.55 (or watch it online in English). After this episode, Taxodus goes live on www.taxodus.net

Even today tax havens recall the image of tropical islands with bank secrecy where celebrities and mafiosi park their money. Yet, offshore financial centres have long ceased being an ‘exotic side show’ to the global economy – now they are its very core. It is wealthy OECD countries in particular that play a major role in this offshore economy and offer multinationals numerous opportunities to evade financial regulation legally. In this global competition for investment nation states lower their corporate taxes more and more, after all, capital flows always choose the path of the least resistance. What are those paths in the year 2013?

Taxodus is a serious, web-based game that responds to the industry of tax planning by which multinationals attempt to lower their taxes on profits and other mandatory contributions as much as possible. Players, ‘acting’ on behalf of multinationals, have to dodge paying as much tax as they can within a strategic landscape that incorporates real data on international capital flows such as withholding taxes and tax treaties. By setting up subsidiaries and intermediate holdings globally, players reveal potential routes through which multinationals can 'neutralise' their tax burdens. These player-generated tax routes are uploaded as a fiscal annual report and are accessible in a public crowd-sourced database.

Today, tax avoidance is no longer an exception but the norm. It has created a powerful financial shadow world into which capital flows are pumped to legally circumvent financial regulation. And while many governments lose tax revenues year after year, large capital sums are accumulating in offshore jurisdictions out of sight of the 'tax man'. Taxodus aims at making the basic principles, geography and impact of the hidden offshore economy visible.

Taxodus is an art project by Femke Herregraven and was created with the support of the Stimuleringsfonds Nederlandse Culturele Mediaproducties, the Mondriaan Fund, the Financieel Dagblad and the VPRO.

You have a comma in your link for Taxodus at the top of the page!