History repeats itself. This looks like a rather novel way to build great companies without the challenges of getting a work permit. 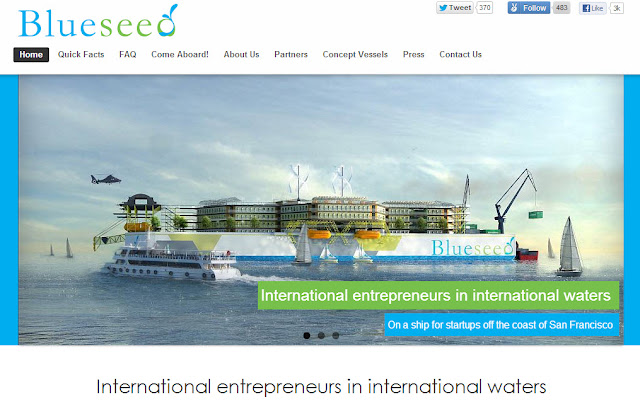 Blueseed will station a ship 12 nautical miles from the coast of San Francisco, in international waters. The location will allow startup entrepreneurs from anywhere in the world to start or grow their company near Silicon Valley, without the need for a U.S. work visa. The ship will be converted into a coworking and co-living space. They will have high-speed Internet access and daily transportation to the mainland via ferry boat. So far, over 1000 entrepreneurs from 60+ countries have expressed interest in living on the ship.

Marketplace did a radio piece about them

Hmmm....bearing in mind so much empty office space in Western Europe, this scheme seems bonkers to me. It also reminds me of the offshore broadcasters - particularly those who ran station stations from the forts. They also wanted to get work in commercial radio but no-one was offering licences in the UK and The Netherlands.


So who still remembers the radio stations that operated from the Forts in the North Sea in the 1960's? They were trying to break the monopoly of the BBC but choosing to use abandoned WWII anti-aircraft defenses built in the North Sea rather than the ships used by Radio Veronica and Caroline. The answer is that plenty of people still remember those broadcast pioneers, as I discovered at the Radioday.nl in the Casa400 hotel in Amsterdam on November 13th 2010. That lead to a request to dig up this show from August 13th 1998 in which we reviewed a new CD about the Forts, containing interviews from those involved. I see those CDs are still around - judging from the displays of offshore memorabilia. Skip through to 18'42 seconds to hear the bit in the programme below about forts.

This show also included a great opening from Jim Cutler hinting at the crowded shortwave bands. Rocus de Joode was in the frequency coordination meeting in KL. Frederick Noronha submitted a piece about community radio in India. It is a shame that it didn't take off as fast as the commercial FM. The programme ends with the review of the double CD about screaming Lord Sutch and his fort adventures.