This is like a coffee table on steroids. For the past couple of months I have been involved in the development of modified Microsoft Surface tables for use as interactive video players in public spaces. Dutch Public Broadcasting, NPO, has really taken the concept a lot further than the original design and the reactions from the public have been fantastic. Thanks to Punkmedia for some of the shots in this video. If you ever need a cameraman to capture conversations, Henk-Jan comes highly recommended. 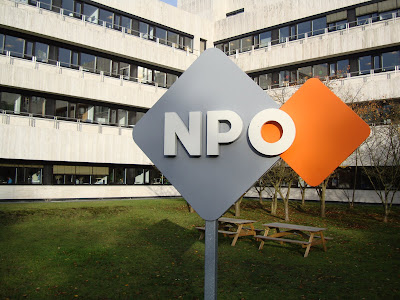 Posted by Jonathan Marks at Thursday, December 31, 2009 No comments: 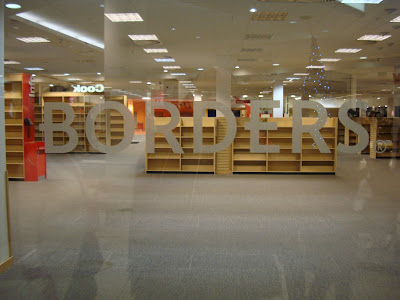 Sorry to see one of the largest (and newest) bookshops in the Norwich Chapelfield shopping complex has shut its doors and emptied the shelves. It has left a rather large gap! But the real estate prices must have been astronomical. As a new Kindle 2 user, I must confess that for run-of-mill novels and business books, I much prefer to get these electronically now.

It seems from an article in the Guardian I read on line this morning, while installing a new computer for my mother, that Borders in the UK went into administration last month, 12 years after opening in Britain. The group's 45 Borders and Books Etc stores have been dumpring remaining stock for some weeks (I remember seeing one near Victoria Station in London), but slashed prices by 90% on all remaining stock for the final day's sale.

The problem with these fire sales is that the great books go very quickly, and I seldom make fantastic discoveries - just because they're cheap doesn't mean the selection was particularly good. 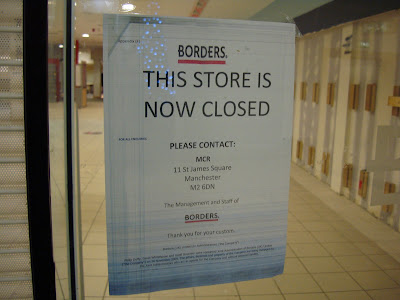 Posted by Jonathan Marks at Thursday, December 24, 2009 No comments: 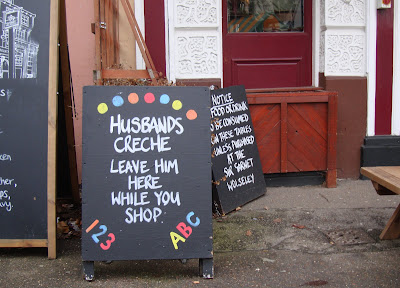 Love this sign - seen in downtown Norwich, England just outside the pub next to St. Peter Mancroft church in the centre of the city. In town, mooching around the shops which are definitely much quieter this year than I can ever remember.

Posted by Jonathan Marks at Wednesday, December 23, 2009 No comments:

Email ThisBlogThis!Share to TwitterShare to FacebookShare to Pinterest
Labels: creche for husbands

It never ceases to amaze me how Schiphol Airport and Dutch Railways seem to be totally incapable of planning for any kind of bad weather - and informing the public what decisions are made. Schiphol.nl can't handle the traffic to its site and trots out a poorly (half) translated website full of spelling mistakes and Dinglish - and honestly believes it's doing a good job. Er, no, it's actually a pretty lousy service, once again proving that communications with its "foreign" customers is well down their list of priorities. We're entering the second decade of the new Millennium and Internet is no longer an experiment. What would happen in any other kind of emergency??

As for the railways - you have to have second sight to know whether the trains will run tomorrow. Sadly, the website www.ns.nl has completely collapsed in a list of poorly worded excuses and NO up to date schedules AT ALL. Why can't the website and the mobile site convey the changes as a result of bad weather? It is because NS and the company providing the rails (ProRail) have absolutely no overview when things go just slightly wrong. So you can't trust the schedules at all. I also find it incredible that none of the warnings of "little or no service" can be found on the Dutch railways English language website. Stuff the adventure - I will follow the advice on the Prorail website, abandon public transport and take the car...the roads are fine. Thank God I didn't book a Eurotunnel/Eurostar experience. Those clowns have totally failed. When will Eurostar's Richard Brown apologise - and resign?
Posted by Jonathan Marks at Monday, December 21, 2009 No comments: 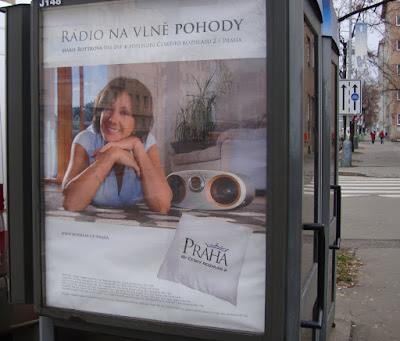 It seems Czech radio, worried about musicians claims from podcasts, has decreed that producers must pick music from an inhouse composer of incidental tunes rather than grabbing something from commercial recordings. I think they have totally underestimated their position as the guardian of Czech arts and culture. Why don't they organise a few "music free" days to knock some sense into the Czech copyright authorities? If they don't, Czech radio is going to become so bland no-one under 65 is going to listen to feature programmes.

Posted by Jonathan Marks at Monday, December 14, 2009 No comments:

Oustanding in the Woods 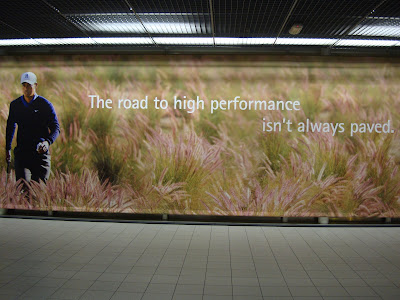 Passing through Schiphol airport today I was struck by the fact that Accenture still has this giant advert up in the C-gate terminal. Bearing in mind Tiger Wood's infidelity, not to mention the car accident, I would be scrambling to get this embarrassment out of the way asap?

Posted by Jonathan Marks at Monday, December 14, 2009 No comments:

Impressions of Prague at Christmas

I have been in Prague for a few days. This is a city I keep coming back to - and which always turns out to be delightful. Especially the old city is magical. I'm here in the centre today to look up an old friend and colleague, David Vauhgn, formerly the editor in chief ar Radio Prague. David has a fascination with history - and that includes the history of Czech broadcasting during the momentus times before, during and after the Second World War. The old city is expecially magical - and mysterious - at this time of year.

Posted by Jonathan Marks at Sunday, December 13, 2009 No comments:

I got a message from a colleague in the Netherlands Thursday lunchtime asking if I could pop round to his Amsterdam HQ to troubleshoot a technical issue that came up. I said couldn’t because I was attending the 6th LeWeb in Paris. He retorted that since the Internet is no longer an experiment, why was there a need for a conference about it. Surely 5 conferences was enough? It sounded to him like holding a conference about electricity and inviting those who use 220 volts to come to share their experiences.

In fact LeWeb isn’t about the web itself. It’s about people using the web as a distribution tool for a great idea. Some of the ideas presented are purely to make money and, to me at least, seemed to be minute refinements in on-line marketing schemes or simply more efficient ways to sell something - increasingly that means applications for the mobile.

By far the most interesting of the 2300 participants were those who came to share content or research concepts. I spent most of Wednesday looking at the 12 start-ups that pitched for 5 minutes each and then took questions from the audience. Some of the best ideas had the rawest of presentations, and I agree with the judges that LeWeb could offer those selected a pre-pitch coaching. Techcrunch seems to do that in the States. But they didn’t seem to have tried it when asked to organize something similar in Paris. Especially because many people are not pitching in their first language, making a concise convincing elevator pitch needs more preparation than we saw.

I personally found the ideas showed by Wordy.com, Hyperwords.net and Mendeley.com to be those with the biggest potential. They didn’t have the slickest presentations, but they did have the better ideas. Thought the keynotes by Jack Dorsey (www.squareup.com) and social media researcher Danah Boyd (www.danah.org) were the strongest. The presentation by Queen Rania Al Abdullah of the Hashemite Kingdom of Jordan was passionate as well as thought provoking - she announced plans to raise awareness for the plight of kids education during the 2010 World Cup. http://www.join1goal.org/ . Rania is truly a connected queen.

I saw several broadcasters wandering around, but only two international broadcasters - CNN, Deutsche Welle and France24. DW was recruiting bloggers for its Best of Blogs award scheme 2010.

Gary Vaynerchuk made a second appearance at LeWeb, and as usual shared his passion for people and building a business in the 21st century. I really like the way Gary is authentic about what he believes in and enjoys working hard. He also asked the organisers to consider more interaction and less panels/keynote presentations.
Posted by Jonathan Marks at Thursday, December 10, 2009 No comments:

Le Web 09 using the audiences to distribute its signals

On my way to Paris for the Le Web conference on the 9th and 10th. They tell me that they are partnering with California based Ustream to allow viewers who can't make it in person. Either watch it below, or go and put the live coverage on your own website by going to http://www.ustream.tv/channel/le-web-main-stage and clicking on "embed codes" in the upper right corner of the video player. The stream will also viewable on mobile's via Ustream’s iPhone viewing application or the new Ustream Android Viewer. Organizers and participants will take some questions from the audience at #leweb on Twitter. I am personally looking forward to the start-up exhibition - and to find out who has survived the credit crunch in France. Last year, the French government said they were encouraging entrepreneurs with financial handouts. But how many took them up on it? Time to find out.

Video streaming by Ustream
Posted by Jonathan Marks at Sunday, December 06, 2009 No comments:

Life as a Voice over Artist

Nice story from the UK Radio Today website. Also interesting example of BBC content that is designed to be "stolen".

Radio voice-over artist Peter Dickson, who has recently become well known as the voice of the X-Factor on ITV1, is featured in a video on the BBC comedy website.

The video gives us a staged glimpse into Voiceover Man's house where he has to put up with his wife's moans about his career.

Peter has been voicing radio commercials and television programmes for decades, but it looks like his most recent work is throwing him back into the general media spotlight.
Posted by Jonathan Marks at Friday, December 04, 2009 No comments: