Bergen from the mountain 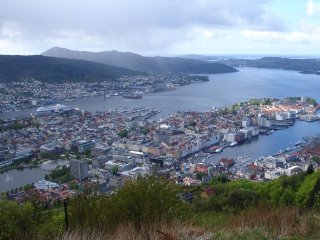 Bergen is the home of microclimates....within 10 minutes we had rain, hail and sunshine at this spot. Didn't know much of the town was destroyed by fire at one point. The Great Fire of Bergen doesn't feature in UK history books. 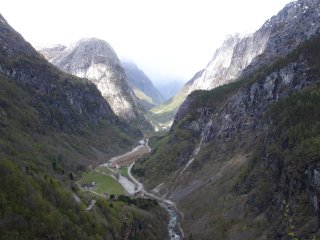 Thanks for the e-mails asking if I have died and gone to heaven. Just in stealth mode at the moment - as well as spending a few days in Norway. If you are in Bergen or Oslo, do take the 790 Kroner day tour called "Norway in a Nutshell". Whatever the weather (and I'm lucky today) the views are simply breathtaking... 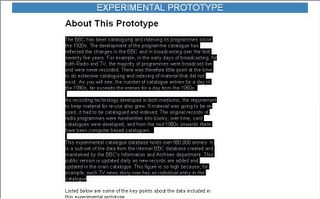 It may come as a shock, but many radio and TV stations around the world have devoted very little in the way of resources to cataloguing programmes they have broadcast. There is now an on-line experimental public catalogue of just under a million programmes produced by the BBC, who have been cataloguing and indexing their programmes since the 1920s. There are a lot of gaps though, if you compare what's in the archive to vintage copies of the BBC's magazine "The Radio Times".

For example, in the early days of broadcasting, for both Radio and TV, the majority of programmes were broadcast live and were never recorded. There was therefore little point at the time to do extensive cataloguing and indexing of material that did not exist. The number of catalogue entries for a day in the 1990s, far exceeds the entries for a day from the 1950s.

As recording technology developed in both mediums, the requirement to keep material for re-use also grew. If material was going to be re-used, it had to be catalogued and indexed. The original records of radio programmes were handwritten into books; over time, card catalogues were developed, and from the mid-1980s onwards there have been computer based catalogues.

This experimental catalogue database holds over 900,000 entries. It is a sub-set of the data from the internal BBC database created and maintained by the BBC�s Information and Archives department. This public version is updated daily as new records are added and updated in the main catalogue. This figure is so high because, for example, each TV news story now has an individual entry in the catalogue