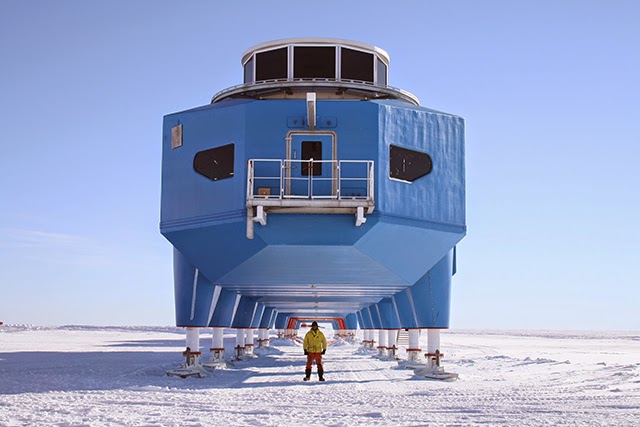 The longest night is nearly upon us. No that is not a mistake, providing you live in Antarctica that is. 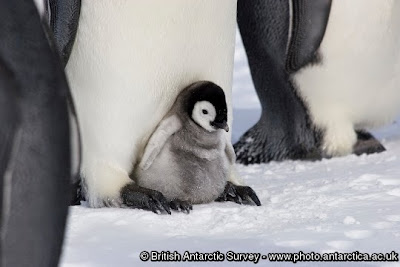 Not many people know that each year, on this longest day for us, the BBC World Service fires up four shortwave transmitters for a special 30 minute broadcast specifically for those on Halley VI, the British Antarctic Survey's movable base down there.

How many potential listeners to the broadcast? About 44 if we can trust Wikipedia and the British Antarctic own site.

The British Prime Minister, David Cameron, and the Commissioner for the British Antarctic Territory, Dr Peter Hayes, have sent messages of support.

In her own message to staff BAS Director, Jane Francis, said:

“I’d like to take this opportunity to say a big thank you to every one of you for all your hard work down south. You are all vital to the science that helps understand that amazing continent. You are part of an exceptional team of scientists and logistics people that make work in Antarctica a great adventure – and a safe one too.”

BAS has four stations which it operates over the winter months; Bird Island, Kind Edward Point, Rothera and Halley VI. There are currently 44 staff based at these stations. They include scientists, electricians, plumbers, chefs and doctors.  The show consists of music requests and special messages to the team recorded in Cambridge by the RAS team back home. Reminds me of Two Way Family Favorites on Radio 2. My son would probably describe it as narrated spotify.

If you still have a shortwave receiver that works, here are the details you are going to need.

After a test on Friday 19th June, the frequencies have been finalised. The special broadcast goes out once on Sunday June 21st 2015 from 21:30-21:45 UTC on the following frequencies:

If you don't have a shortwave radio, you can access one on line which has been set up by the University of Twente in Enschede.

What to look for

This is what the broadcast sounded like in 2014 via Ascension Island, as recorded by Domenik for archive.org. Note that the first couple of sentences were missing from the broadcast.


Halley VI Research Station is the first fully re-locatable research station in the world. It was commissioned in 2006 and its unique and innovative structure was the result of an international design competition in collaboration with the Royal Institute of British Architects (RIBA). The state-of-the-art research facility is segmented into eight modules, each sitting atop ski-fitted, hydraulic legs. These can be individually raised to overcome snow accumulation and each module towed independently to a new location.

The station took four years to build and delivered its first scientific data in 2012. Its iconic design houses a cutting-edge science platform and modern, comfortable accommodation.

The central red module contains the communal areas for dining, relaxation etc., while the blue modules provide accommodation, laboratories, offices, generators, an observation platform and many other facilities. Remote scientific equipment, set up for long-term monitoring, is housed in a number of cabooses around the perimeter of the site, which also contains numerous aerials and arrays for studying atmospheric conditions and space weather (i.e. the ionosphere and plasma physics)

Approximately 1.2 m of snow accumulate each year on the Brunt Ice Shelf and buildings on the surface become covered and eventually crushed by snow. This part of the ice shelf is also moving westward by approximately 700m per year.

There have been six Halley bases built so far. The first four were all buried by snow accumulation and crushed until they were uninhabitable. Various construction methods were tried, from unprotected wooden huts to steel tunnels. Halley V had the main buildings built on steel platforms that were raised annually to keep them above the snow surface. However, as the station’s legs were fixed in the ice it could not be moved and its occupation became precarious, having flowed too far from the mainland to a position at risk of calving as in iceberg.

Posted by Jonathan Marks at Thursday, June 18, 2015 No comments:


This news edition of the programme kicks off the new year 1995 with a range of new items. This was a good example of a news show without a particular theme, based on a "crowd sourced" pile of news items. Victor Goonetilleke is hearing a new station from Ethiopia Radio Fanaa,  DW has announced the old Radio Berlin International transmitter site in Nauen is to be upgraded. Voice of America announces major expansion and record audiences. Pete Costello has launched a catalogue of hypertext links. All the mediumwave stations in Austria have signed off for the last time.

This episode is hosted on the Media Network vintage vault
Posted by Jonathan Marks at Monday, June 01, 2015 No comments:

This early Media Network is more than 30 years old, so be gentle when listening to it. Lou Josephs reports from Boston on how radio stations across the US have united to play the USA for Africa single, we are the world. Voice of America is expanding both its output and audience according to VOA Director designate Gene Pell. A VOA relay station is being planned for Belize. We discuss the use of a computer interfaces to control a shortwave radio. The TROS has published plans for the Sinclair ZX-80. Rainer Lichte has published plans to connect to a Apple IIe to a shortwave radio.
The 10th West Coast computer fair has just closed. Our reporter talked to computer critic John C. Dvorak, now a host on the popular No Agenda Show podcast and on the TWIT network. John actually had some interesting thoughts about why the home computer was never going to make it. Richard Ginbey had several interesting clips from the airwaves in his African Media report. John Campbell also has clandestine radio news, including a follow-up to the book Secret Warfare.

This episode is hosted on the Media Network vintage vault
Posted by Jonathan Marks at Monday, June 01, 2015 No comments: