In the clouds above Dar Es Salaam 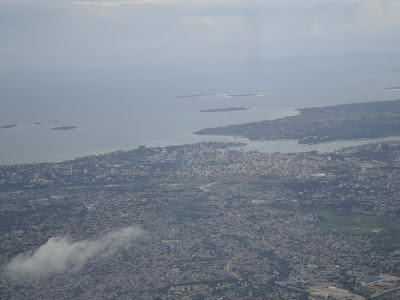 What an incredible country I've landed in. My first time doing work in East Africa and I am amazed at the energy of the people.

Store in the Back of the Windmill 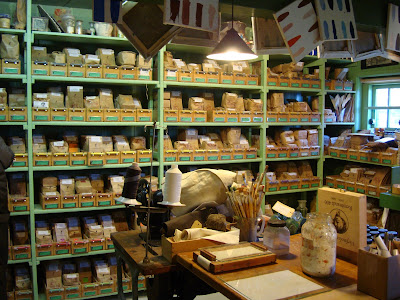 Anybody guess what's in the bags? Went with a group of visitors to Zaanse Schans just North of Amsterdam. The owner of the windmill showed me the other shop he runs at the back. Fascinating - and yes perfectly legal.

Posted by Jonathan Marks at Saturday, March 27, 2010 No comments:

GLASS HALF EMPTY: The Coming Water Wars
Originally uploaded by Rev. Xanatos Satanicos Bombasticos (ClintJCL)
Didn't realise the water in Belgium was of such poor quality.
Posted by Jonathan Marks at Friday, March 26, 2010 No comments:

I wanted to share part one of a short documentary I am making about the radio documentation centre in Vienna. When I was there in September last year, my colleague broadcaster and friend Wolf Harranth showed me around the world's largest collection of radio related documents, both from the broadcast and amateur radio world. In fact the millions of QSL cards, magazines, books and unique government records tell the story of communication across international borders. They survive on help from volunteers and I hope that this video will help to explain why they are so passionate about preserving the golden age of international radio. I worked closely with Wolf Harranth, the German media editor at the ORF, when I was host and presenter of Media Network on Radio Netherlands. We swapped transmission tapes and I am glad we both had the foresight to keep a lot of radio history others have subsequently thrown away. There is more information in both English and German at http:// dokufunk.org. Vimeo limits the size of files, so I have split this first draft into two parts. This version goes into a lot more detail because I know many others shared the memories that Wolf describes. Enjoy!
Posted by Jonathan Marks at Sunday, March 21, 2010 1 comment:

This interview profiles the pioneering work being done by Professor Eric Brewer at University of California at Berkeley. He and and his team have been modifiying wifi routers to connect buildings 50 kms or so apart. No extra power is needed, only a special antenna and modifications to the router software. Experiments in Venezuela, India, Uganda, Ghana and Guinea Bissau have proved this technology to work well. If you need to connect buildings, this is a much cheaper alternative to satellite. I see this as being an excellent way to connect local radio stations in Africa who want to share content. It can also be used to connect rurual radio stations to Internet Service Providers in urban areas.

Was delighted to see Brewer has been given an award for this work. The Association for Computing Machinery announced on March 15 2010 that the Berkeley computer-science professor is the winner of the latest ACM-Infosys Foundation award. More info: here
Posted by Jonathan Marks at Tuesday, March 16, 2010 No comments: 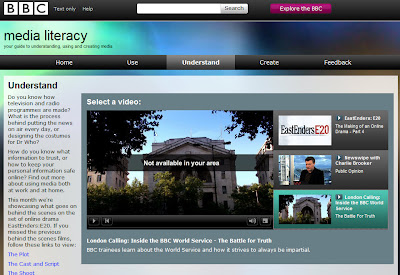 Yes, it makes sense to ensure that content that BBC License Fee payers have paid for is only seen inside the UK. But putting the same block on educational and or publicity material makes NO sense at all. It was the same with the BBC Archives material published a while back. Black and white footage of Neville Chamberlain returning from Berlin were apparently not available in my area! This is not the kind of stuff that will contribute to bandwidth bills. Now that the BBC Management have spoken about the new focus of the corporation, I hope they will consider subscriptions to some BBC domestic channels (or selected content). A new role for BBC Worldwide perhaps?
Posted by Jonathan Marks at Sunday, March 07, 2010 3 comments:

Inside the This Week in Tech Network

Dropped by Leo's production centre in the heart of Petaluma, Northern California at the start of February 2010. The town is about a half hour's drive North of the Golden Gate Bridge, at the foot of Sonoma County, the famous wine belt of Northern California. It has been used a backdrop for "American Graffiti" and "Peggy Sue Got Married." It's like escaping to middle America after the chaos and confusion of San Francisco.

Leo has been a pioneer in creating tech podcasts, developing a business out his popular radio show on KFI, and the remnants of Tech TV. Interested to hear his views on the future of radio, i.e. why HD-Radio might not make it. Also thanks to Dane Golden and Colleen Kelly who were kind enough to share insights on the back office behind the This Week in Tech network. You can also find the feeds in iTunes so the shows download automatically as a podcast. Little known fact: we share a friend in the voice-over business. The first words on each TWiTcast are voiced by Jim Cutler, a long time friend of the Media Network shows I used to produce and present for Radio Netherlands.
Posted by Jonathan Marks at Friday, March 05, 2010 No comments: 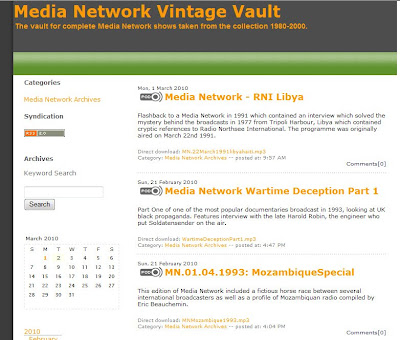 Doing various experiments with podcasting services at the moment. It turns out it is much easier to publish video on the web than arrange pick-up of audio podcasts into iTunes. Also, the cost per MB is significantly higher. Perhaps that explains the fact that podcasting seems to have reached its natural peak and no longer seems to be growing. I have been gradually digitizing old editions of Media Network in an attempt to rescue tapes before they crumble into pieces of ferric oxide and polyester. I plugged my Revox tape recorder into the line-input of a Zoom H2 recorder, and the results are amazing. In fact, since these programmes were broadcast on shortwave, this is the first time people have been able to hear these documentaries in "studio quality". These programmes are being shared in the spirit of Creative Commons, i.e. I have no plans to charge for downloads.
Media Network Vintage Vault
Posted by Jonathan Marks at Tuesday, March 02, 2010 2 comments:

Megan Elliot is one of the founders of XMediaLab. After the conclusion of the successful workshop in Amsterdam I asked her to explain the thinking behind the format.


XMediaLabs Amsterdam consisted of two parts: the Pro-Day Conference (17th November) for 150 guests drawn from a cross-section of Dutch and European media creatives and power-brokers; and then the Lab itself (18th November) at which teams drawn from NPO’s 12 thematic channels and related companies attended the Lab in Amsterdam working one-on-one with the International Mentors on several aspects of public media and broadcasting.

Dan Armstrong on Mobile in Africa

Dan is a brilliant thought-leader and practicioner on the subject of new services for the mobile phone, especially in the work he has done on mobile banking for the Rabobank in the Netherlands. Following his for the XMediaLab, I asked him about the challenges for the banks in Africa and the revolution the mobile is making. Why didn't it catch on so fast in Europe?

Shanghai based XMediaLab worked with NPOX from Netherlands Public Broadcasting to organise a brilliant series of presentations and high-level workshops in November 2009. Some of these presentations have been posted on Vimeo, together with interviews with most of the mentors.
Posted by Jonathan Marks at Tuesday, March 02, 2010 No comments:

Is this the future for web advertising?

I like the creative way this "And then there was Salsa" ad works on the vimeo site. It is a pity that the embedding code doesn't do the same when the ad spreads to other sites.
Posted by Jonathan Marks at Tuesday, March 02, 2010 No comments:

Email ThisBlogThis!Share to TwitterShare to FacebookShare to Pinterest
Labels: "and then there was salsa", Tomato

One of the better overviews of the chaos that is the world of Mobile Applications. Wonder how long it will take Android to catch up. If they focus on useful stuff, I guess it won't be that long.
Distimo Mobile World Congress 2010 Presentation - Mobile Application Stores State of Play
View more presentations from Distimo.
Posted by Jonathan Marks at Monday, March 01, 2010 No comments: