An extraordinary day to be in Eindhoven

Champagne was flowing at lunchtime to mark the start of an important new phase in Indium Phosphide chip manufacture in the world. Having followed the development of photonics for the last 9 months, I've come to understand that some amazing technologies are being born with the power of light rather than electrons.

Smart Photonics, a pure-play foundry, which began in 2012 as a spinoff initiative from Tu/e revealed an ambitious roadmap for the coming years. Pure-play means they only work with customers to make their chips. They don't want a situation like Samsung and Apple where Samsung has made screens for Apple, while at the same time competing with their own phones.

Sigrid Johannisse, Director of StartupDelta and Alderman Stef Depla of the City of Eindhoven assisted in the inauguration of the new cleanroom production facility. They etched a message of support into the first wafer to be made in the new facility. 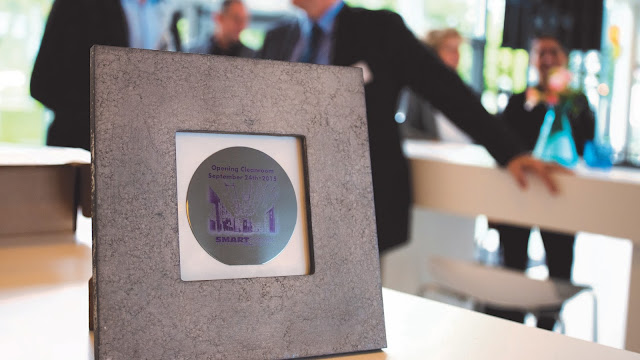 Richard Visser, CEO, Smart Photonics took the opportunity of the visit to reveal the next stage of his company’s plans. “Today, we opened the pilot line production facility which allows us to offer a new range of services to photonics chip designers and high-tech companies around the world. We have already built a trusted relationship with more than 40 major companies in Europe, USA and Asia. They understand that indium phosphide chips are the best choice in applications ranging from new generation low-power consumption data-centres to “needleless pills”  for medical diagnostics that can help diabetics. Photonics also plays an important role in the aircraft industry and highly secure cryptography. In short, the market is scaling exponentially.” 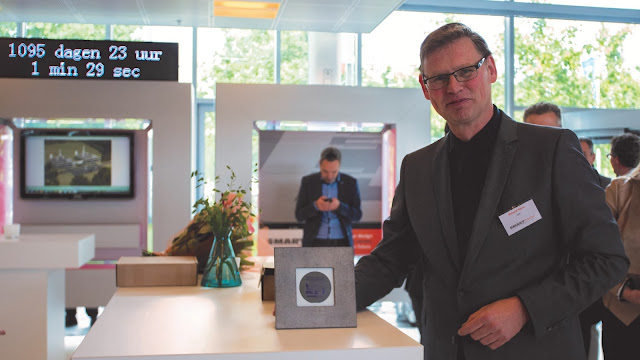 The opening of the new production facility on High Tech Campus Eindhoven means photonics design companies can scale-up production much faster and at a significantly lower cost. The official opening of the facility involved a short visit to the brand new cleanroom but also contained a surprise ending. 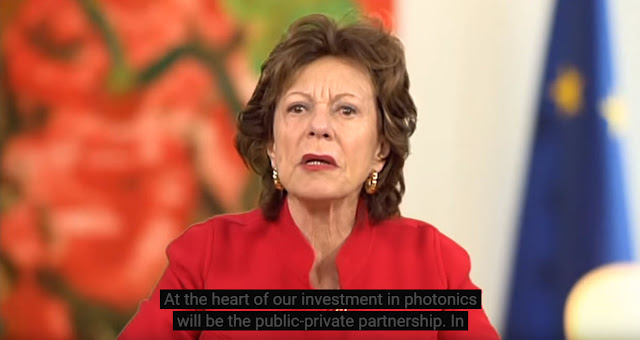 Sigrid Johannisse has worked alongside Neelie Kroes (above) in the development of European Commission policy to give Europe a 5 year lead on the US and Asia. Together with Neelie Kroes they both put up a very strong case in 2012/2013 that Photonics should be one of the key 6 enabling technologies. It was a commitment which has proved to be a winning strategy, and the results of these investments are now bearing fruit.

Just before pushing the countdown button, Sigrid had this to say.

We've listened today to the story of Eindhoven as a City of Inventions, especially in making light. But also the great work in building photonics startups that are light year's ahead. We hope your goals will also be achieved at the speed of light. On behalf of Startupdelta, we wish you every success, we're especially proud of what's been achieved so far, and we'll work together to build an even brighter future. 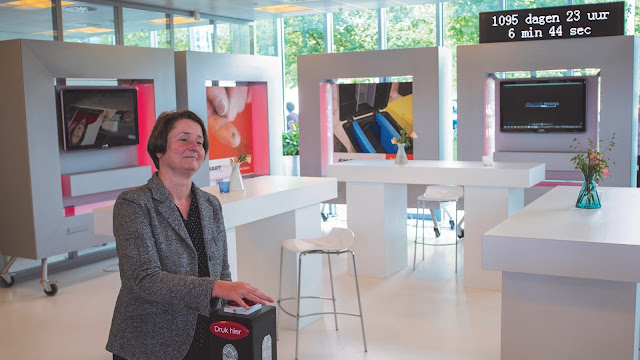 In three year's Smart Photonics looks forward to inviting today’s guests back to Eindhoven to inspect their new full-scale Indium Phosphide chip factory. Designs for the new facility will be finalized based on the practical experiences gained in the pilot facility opened today. This will ensure that photonics manufacturing prospers in this region of the Netherlands, keeping Eindhoven light years ahead in Photonics. 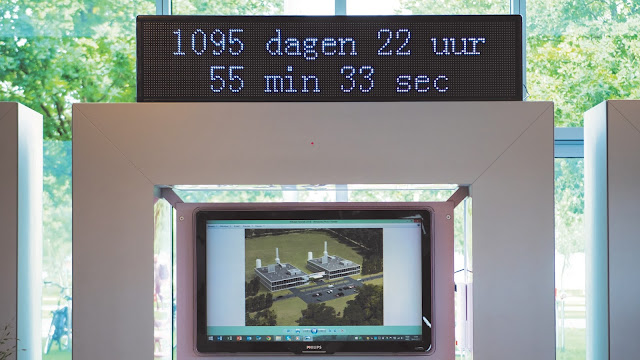 Posted by Jonathan Marks at Thursday, September 24, 2015 No comments:

There used to be an annual hi-fi and TV exhibition at the RAI Amsterdam called FIRATO. It gradually died out as organisers realized that going to see pop stars dancing on stages next to gadgets didn't sell any more gadgets. The acoustics in the vast halls bear no resemblance to what it sounded like at home. When we visited in 1982, the show was already passed its peak. I was always surprised that a new shortwave radio was often shown there, though seldom on the market until months after. Back then DAT was the big story. In 2015, the only show in Europe left is IFA in Berlin, but I seriously wonder for how much longer.

Paul Ballister reports from London on a Polish clandestine radio station supporting the Solidarity movement which has popped up in London. And Radio 4 Today's programme has been talking about pirates.

Media Network was a labour of love for all those who contributed on a regular basis. Richard Ginbey, at that time a media enthusiast working in broadcasting in South Africa, compiled a series of radio portraits using his own extensive recordings taken off air. I think that they are probably some of the only surviving recordings of radio stations in places like Angola. Also, check out of the Interval signal database.

This edition also contains an interview with Michiel Schaay, the Dutch author and publisher of many utility books.

We start this edition with news about clandestine radio stations being set up to broadcast to Afghanistan, currently occupied by Soviet troops. Dennis Powell reports on concerns in the US about vastly expanded Cuban mediumwave stations and possible interference. Andy Sennitt reports about the legendary format change for WABC in New York to all talk. We phoned RTV Hong Kong to find out why they were going on shortwave for a brief period. Richard Ginbey presents Part 2 of his illustrated feature on radio in Mozambique. Those recordings of Radio Free Mozambique must be unique these days. No-one else has kept this material. Sadly, Richard was killed in a car accident. Not sure what happened to his cassette collection of those radio recordings. Dan Robinson has been hearing Radio Portugal and Radio Singapore with very strong signals.

We started with an interview with Patrick Humphreys (pictured) who explains the demise of Voices magazine - an attempt to start a listening guide about the programmes on international broadcasting. Financially, it turns out to have been a disaster. This edition includes a profile by Richard Ginbey of broadcasting in Botswana as it was in 1982. There was also an oblique reference to the World and Rhodesia programme which the BBC broadcast from a transmitter site in Botswana. It would be 1995 before we discovered exactly what BBC's Douglas Muggeridge was talking about. We rang up the charming Andrew Piper, programme organiser at the BBC who explained about new series they were launching. We interview an author on new propagation theories. Victor Goonetilleke rounds out the edition with recordings he made of a coup in the Seychelles.

The programme starts with news of a clandestine radio station, Radio Solidarity, broadcasting within Poland. The country is under marshall law. And BFBS has started a special programme of requests to the UK Task Force heading to the Falklands. In fact, those broadcasts from BBC Ascension Island were monitored in Buenos Aires and later used by an Argentine propaganda station to address the same UK troops. Sarah Kennedy was giving out names so the Argentines knew who was on which ship. We also asked the BBC World Service about their extended coverage in English and Spanish to Latin America. Beverley Wakeham has news on the fate of the Radio New Zealand shortwave service. And we solved the mystery of that strange Spanish language radio station reported back on April 1st.

This episode is hosted on the Media Network vintage vault
Posted by Jonathan Marks at Saturday, September 05, 2015 No comments:

Remember the TV ship Odelia broadcasting off the Israeli coast? Neither did I until I revisited this edition of Media Network and an interview done by Kas Van Iersel. There was also the on-going discussions about Radio Marti to Cuba. We talk with the late Willem Bos about Citizen's Band Radio on 27 MHz. He's set up a magazine to serve this new audience of radio enthusiasts. Dennis Powell has news about clandestine broadcasting in Afghanistan. Radio Caroline is promising to return over Easter. No mediumwave frequency has been announced. Arthur Cushen reports on Australian pirates. And we conclude with a unique recording of a strange Spanish language radio station. Professor John Campbell had some interesting theories.

More editions of Media Network from a very turbulent year -1982. Malta and Libya had entered into a Friendship and Cooperation Treaty, in response to repeated overtures by Gaddafi for a closer, more formal union between the two countries; and, for a brief period, Arabic had become a compulsory subject in Maltese secondary schools. German international broadcaster, Deutsche Welle, was forced to shut down its relay station on the island under the Foreign Interference Act. Mike Barraclough gives a plus for the popular Reading Meetings for SWLs. Voice of Greece and RTBF Belgium are being heard well at the moment. Tony Jones (pictured) gives us a feature about the return to shortwave of several Bolivian stations. We speak with George Otis, who has built the religious station the Voice of Hope that we're hearing on the 49-metre band. Professor John Campbell reports that some clandestine radio stations are replying to listeners letters. Radio Venceremos has an address in Mexico City. Richard Ginbey has an item about Radio Biko. Strange things happening in Swaziland, following the death of their long-reigning Monarch.