The cities of Eindhoven, Enschede and Delft can all be proud of the supreme efforts made by their respective Technical University Teams nearly 15,900 km away from home in Adelaide, Australia. Teams from 30 countries took part in the 3000 km World Solar Challenge race from Darwin to Adelaide this past week.

Teams from the Netherlands came away with the three main prizes. 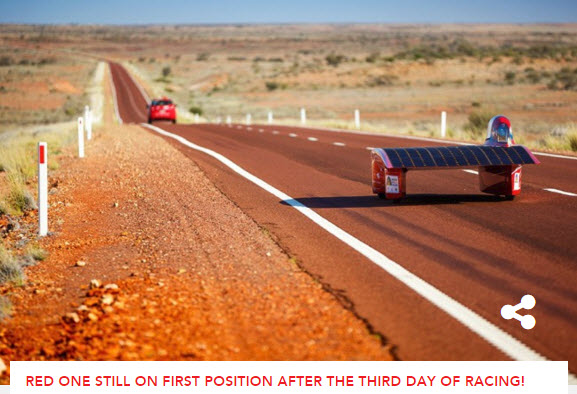 The University of Twente was awarded the CSIRO innovation prize. Dr Glen Platt, Energy Research Director at CSIRO Judge said "It is customary that the scientific faculty recognise and honour new ways of doing things. In the trip down from Darwin our team was able to observe many cars with superb engineering and design. It ranged from carbon fibre bodywork to wiring and layout of the car itself. We also saw breakthrough innovation. It ranged from a Coke-bottle evaporative cooling system, to solar-driven route planners, coupling real-time weather information so as to make maximum of use of every ray of sun. I hope we can encourage more of these kinds of developments in the years to come. But one team combined what we thought was great novelty with fantastic execution. The 2015 World Solar Challenge Innovation prize goes to the University of Twente for its solar array balancing interface - maximum power point tracking system."

During the rest-point moments during the race, the "Red One" car team orientates the car so the solar panels are exactly at right angles to the sun. In previous years, Twente removed the solar panels, placing them on an adjustable portable stand next to the vehicle. This year the rules have changed so that the panels and the chassis had to remain connected. So they devised an adjustable mirror to ensure the maximum sunlight capture reaches the solar arrays.

2015 is the second time the Cruiser Class has been part of the challenge. This time, the Australian organisers managed to double the number of entries to this very difficult challenge. They were also tremendously excited to get the support of Tesla Motors for judging the Cruiser Class. The way these cars have captured the attention of the competitors, scientists and the media has been tremendous. Success in this particular class is a combination of speed, endurance, the work done (the number of passengers carried) and the external energy inputs. This year was an incredibly close race with 5 of the 7 teams managing to finish the entire route. Each team had a different strategy, balancing their load, optimising their speed, and carefully managing their energy usage. But the judges also had introduced a subjective element - have these young engineers really created a car that is desirable? To what extent is this car something that the members of the public want to own. The judges looked at ease of access, control layout, features, benefits, styles, aesthetics,

James Harris, the lead recruiter of Tesla Motors came on stage to announce the winner. It was Eindhoven Technical University's team with their family car Stella Lux. They completed the 3022 km in a little over 39 hours. They clocked 3044 passenger kilometres and a practicality score of 84.5%. That gave an overall mark of 97.3%!

Solar Team Eindhoven captain, Tom Selten, started by honouring all the other competitors in the Cruiser class...Hochschule Bochum from Germany in particular. "Thanks to this Australian initiative, the team in Eindhoven got the opportunity to build this car. Of course, the competition was strong, but so was the team spirit between all the teams taking part in the Cruiser class."

"As you may know, Solar Team Eindhoven won this Cruiser class in 2013." continued Tom. "We still firmly believe this type of car is the future direction for all solar cars. If we can build a car that family's really want to own, then we're heading in the right direction. But since the last race, the rules for this World Solar Challenge have changed - and not in favour of the type of family car we believe in. In fact, in September 2014, we called a strategy meeting in Eindhoven to discuss our options with students and technical sponsors. Would we enter the Cruiser class again with these new, much tougher requirements with a reduced chance of winning? Or would we switch categories to the Challenger Class and focus all our strengths on building the world's fastest solar car."

"I am so glad we accepted the most difficult challenge and went for the next generation solar family car. This time, we've focussed our efforts on improving the safety, comfort and interior design of Stella Lux. We beat all our previous records this week - the range is now 1500 km for Stella Lux on a single charge. That's thanks to onboard smart technology which tracks both wind and sunshine and gives us the real-time range. That helps build a driving strategy."

The first and second prizes for the Challenger class went to Delft (Nuon) and University of Twente respectively. In fact for the first three days Twente was leading Delft by several minutes. But they had to slow down to avoid some unsafe conditions, and Delft then took the lead. But it is also important to note that Twente improved on their 2013 racing time by almost four hours! So everyone is getting a lot faster.

It was also fitting that in their acceptance speech, Delft honoured the memory of the late Dutch astronaut and physicist Wubbo Ockels, who did so much to promote the global search for technologies to save the environment. "Remember we only have one planet. There is no spare." That's why this rapid shift to renewable energy sources like solar is so important.

Posted by Jonathan Marks at Sunday, October 25, 2015 No comments: