Interesting discussion between Elon Musk, Enda Kenny, Shervin Pishevar and Mark Little. Websummit was brilliant, but I wish they did more to curate the lessons learned. The lifetime of the learnings is only a few days after the euphoria is over.
Posted by Jonathan Marks at Thursday, October 31, 2013 No comments:

The US National Science Foundation is waking up to hardware accelerators

When Steve Blank did a keynote at Startupbootcamp Demo Day last year, I had a chance to chat with him about the differences between Western Europe and the Western part of North America. Steve said that he thought that academic institutions in the US were moving further ahead working with private entrepreneurs rather than trying to go it alone. Looking at the presentation that Steve made on Friday, it looks like the US National Science Foundation accelerator is doing a lot to grow the hardware sector. The key is indeed to get the balance right. "The irony is that while the U.S. government has had a robust national science and technology policy, it lacks a national industrial policy; leaving that to private capital. This approach was successful when U.S. industry was aligned with manufacturing in the U.S., but became much less so in the last decade when the bottom-line drove industries offshore. In lieu of the U.S. government’s role in setting investment policy, venture capital has set the direction for what new industries attract capital".

There does seem to be progress. This is quote from Steve's blogpost today. Food for thought.

This is the start of the third year teaching teams of scientists (professors and their graduate students) in the National Science Foundation Innovation Corps (I-Corps). This month we’ve crossed ~300 teams in the first two years through the program.

I-Corps is the  accelerator that helps scientists bridge the commercialization gap between their research in their labs and wide-scale commercial adoption and use. I-Corps bridges the gap between public support of basic science and private capital funding of new commercial ventures. It’s a model for a government program that’s gotten the balance between public/private partnerships just right.
While a few of the I-Corps teams are in web/mobile/cloud, most are working on advanced technology projects that don’t make TechCrunch. You’re more likely to see their papers (in material science, robotics, diagnostics, medical devices, computer hardware, etc.) in Science or Nature. The program pays scientists $50,000 to attend the program and takes no equity.
Currently there are 11 U.S. universities teaching the Lean LaunchPad curriculum organized as I-Corps “nodes” across the U.S.  The nodes are now offering their own regional versions of the Lean LaunchPad class under I-Corps.
The NSF I-Corps uses everything we know about building Lean Startups and Evidence-based Entrepreneurship to connect innovation to entrepreneurship. It’s curriculum is built on a framework of business model design, customer development and agile engineering – and its emphasis on evidence, Lessons Learned versus demos, makes it the worlds most advanced accelerator. It’s success is measured not only by the technologies that leave the labs, but how many U.S. scientists and engineers we train as entrepreneurs and how many of them pass on their knowledge to students. I-Corps is our secret weapon to integrate American innovation and entrepreneurship into every U.S. university lab.
Posted by Jonathan Marks at Sunday, October 27, 2013 No comments:

For about an hour today the Apple Store was offering what looked like a refurbished Mac Pro identical to the new one launched today. It was of course a blooper. But we snapped the page in time. But do I really need all that power for Adobe Premiere? 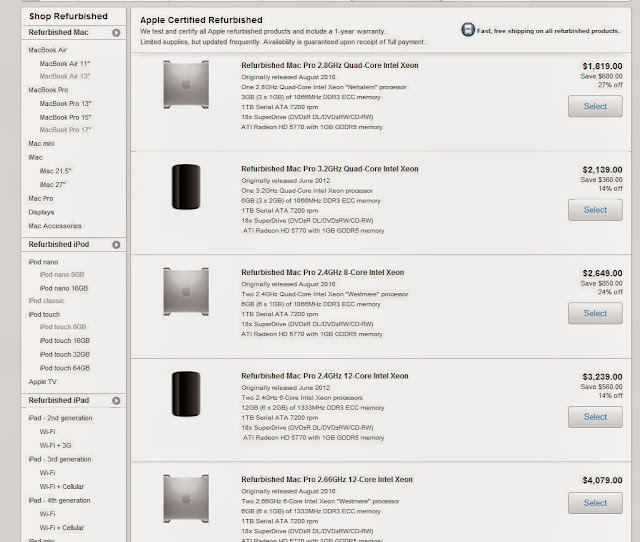 Posted by Jonathan Marks at Tuesday, October 22, 2013 No comments:

5000 hightech hardware teams were screened worldwide, 850 approached, 250+ signed in for the program. In the end 21 teams from 9 countries were invited to the two-day finals in Eindhoven.

We started the finals with the story so far.

Over an intensive two days, the teams presented and discussed their disruptive technology with investors, entrepreneurs, professors and high-tech specialists. One team from India was prevented from joining us in person by the typhoon affecting that part of the world. But we had intensive video exchanges for several hours in order to give them a fair chance.

Guus Frericks, CEO of Dutch Expansion Capital is one of the lead initiators behind Startupbootcamp HighTechXL. He says that mentors, investors and the whole production team have been amazed at the really high level of all these teams.

"We're used to slick pitches from those in the web and social media space. But these teams take real science you can touch and feel to the cutting edge. It reminds me that famous brand hardware companies began as small teams with a passion to invent what most of us now take for granted. We've seen living proof this week that it is still possible for dedicated teams to disrupt traditional industries. We were surprised to see "Demo Day" quality potential before we've even started! Diamonds in the rough..."

In the end the following teams were selected for the 2013 program starting on November 11th.


The trip to the South-Eastern part of the Netherlands paid off for all the teams, even those who didn't get in this time. Guus Frericks encouraged those who were not selected not to give up. “The level was high to start with. Everyone gets insights to take home. And the networking and discussions with investors and mentors is already in full swing. We encourage all the teams to take advantage of the momentum and follow-up on the leads.”
Posted by Jonathan Marks at Wednesday, October 16, 2013 No comments:

Interesting use of Skype. Remember the virtual choir project? Seems it is heading for new heights.
Posted by Jonathan Marks at Sunday, October 06, 2013 No comments:

I see that Dutch public broadcasting has launched a direct appeal to its public to protest about government funding cuts. That's been tried by so many others before. And it never works. Because the public have no reference to measure whether the claims are true. 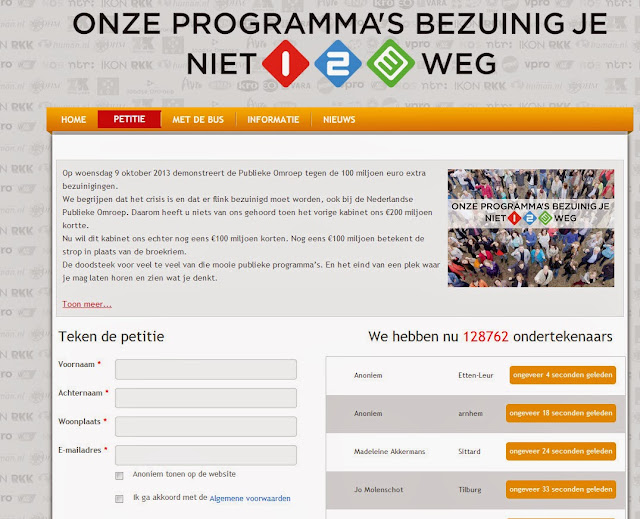 The antiquated Dutch system with over 22 separate public-funded production companies finally broke in 2011, more than 5 years after independent analysis warned that it was all unsustainable. 127 million was shaved off the national public broadcast budget then, the balance being found by virtually eliminating the Wereldomroep (Radio Netherlands), some orchestras, and very bureaucratic organisations like the Media Commission. So the cuts to national broadcasting then was 127 not 200 million as is being claimed now.

Then along came another cut of another 100 million. And that will kill off a lot of creative productions that once gave the Netherlands a production edge in Europe. Now, that talent has vapourised, I would argue that only the VPRO is left as a public broadcaster in the way that it adds value to society and social discussion. The rest are doing their best to fill airtime. But even the VPRO has been decimated recently. And, of course, the wrong people were forced to leave. Dutch public broadcasting is notoriously bureaucratic and a lot more needs to be chopped away before the young tender shoots have a chance to recover. It's going to take time, and Hilversum doesn't have much time left.

Organising a day of action in the Hague, with free buses from the provinces, smacks more of a rally the government might organise in Iran. Not of this century.

Mind you, the political parties are not being clever either. Instead of ignoring such a protest campaign, the right-of- centre VVD has tabled questions in the Dutch parliament. Was public money being used to finance such a campaign, which has so far raised 130,000 signatures? Probably not - build a few pages on a website and grabbing a few relevant quotes can't cost that much. And all this might raise the question as to why there is still guaranteed airtime for political parties in a 500 channel universe.

What the government should have done is set aside a budget for public broadcasting and ensured that the current incumbents could only get access to half that amount. The balance would be open to new production guilds who could create programmes without the current legacy perspective. Fewer programmes of a much higher production value are desperately needed in this market.

I believe in a healthy public broadcasting system. But I also demand it to be far more transparent. That is definitely not the case at the moment. Holland is well behind other countries in working out what public broadcasting does to maintain and grow public values. And then explaining it to the people that foot the bill. Us.
Posted by Jonathan Marks at Tuesday, October 01, 2013 No comments: