Now that President Hugo Chavas has passed away, Twitter has lost one of its most prolific political users. Wonder what will happen to the account? 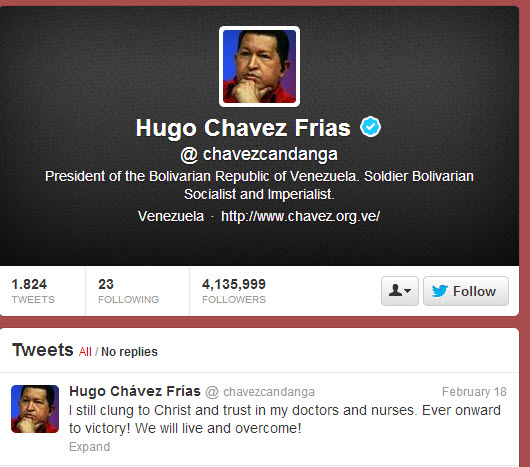 Chavéz was just a few months into his fourth term. Vice President Nicolás Maduro will succeed Mr. Chávez as interim president, but they have to hold news election within 30 days, according to the constitution.

I wonder too whether the government will continue building a brand new shortwave broadcast transmitting centre.

SW Sites contributor, Wolfgang Buschel, counts no less than 170-180 concrete mast poles of various sizes surrounding the transmitter building. The exact co-ordinates are 08°53'13.87"N 67°21'46.44"W or click here to be taken to the images on Bing maps. Perhaps Chavas never got the memo. They may well build the place. But who on earth will ever listen?