I remember asking biographer Walter Issacson, on his book tour visit to the Netherlands, about what he knew about of boat that Steve Jobs had commissioned from a Dutch shipyard. He didn't go in to details, apart from confirming that Jobs had given the go ahead before he died. His plan was to travel around the world with his family. 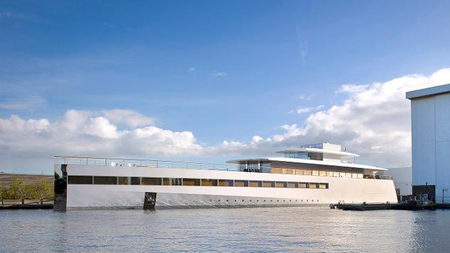 Now, the Apple Fan website in the Netherlands, aptly called One More Thing has published photos and a video of the ship before it is crated and sent to the USA. I'm calling it a ship - at 78.2 metres long, it's way to large to be called a motor yacht, though the builders, Feadship, might disagree. Note that the photos from the yard in Aalsmeer (the town with the flower market near Schiphol airport) don't mention Jobs, just the name of the vessel and its number -- 684.

According to the OMT report, the ship's hull is made of aluminium, making it much lighter than other vessels of this size. The unique features seems to be a large sun terrace containing a jacuzzi at the bow - as well as the continuous windows just below. There are small speedboats on board, stored in the stern, so that people can reach the shore if the habour is too small for the good ship Venus. The boat is steered using seven 27 inch iMacs in the cabin.

I confess I'm still rather surprised. Because although it seems to fit Jobs' style, it seems at odds with his love for a simple lifestyle - devoid of much furniture. This ocean liner looks more like a Mac Pro than a MacBook Air. Wonder what the family will do with it?