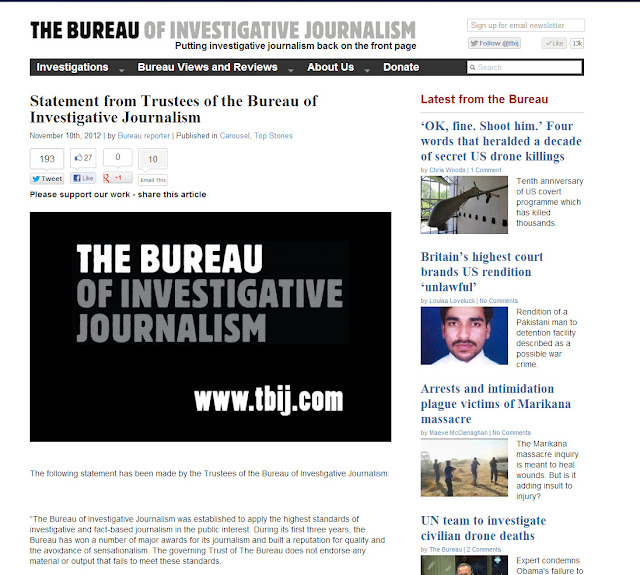 I'm very disappointed that the Bureau of Investigative Journalism in London doesn't appear to realise that the reputation and future of the whole organisation is on the line. And this would be the time to communicate with the public and with the industry. Putting up a statement on the home page and taking down the explanation of a tweet by the editor of the Bureau does not inspire confidence in anything else they are doing now. I've found their way of working to be transparent in the past, living up to their tag line of putting investigative journalism back on the front page.

So why do we have to read this in the Guardian?

The tbij reporter Angus Stickler generated the 2 November Newsnight report that incorrectly linked McAlpine to child sexual abuse. Stickler has declined to comment, but the bureau's editor, Iain Overton, who tweeted before the broadcast that Newsnight was about to out "a very senior political figure who is a paedophile", is believed to be considering stepping aside.

The statement on the Bureau's website as of Monday morning (10 UTC) is signed by James Lee. With all the quoted experience, he must realize that what's they're doing now is fatal. And the Bureau is tiny.

James Lee
James Lee has been an entrepreneur, executive and consultant in film, television, newspapers and book publishing. He was involved in the finance and production of more than 30 feature films including many British film classics. He was Chairman of Scottish Screen, a director of the UK Film Council and is on the board of a large East African media company. He is Chairman of the Bureau of Investigative Journalism, based at City University London.

Meanwhile (former?) Managing Editor Iain Overton of the Bureau has deleted his twitter account. Now that puts him straight into the idiot category. ( see update. This appears to have been a technical error).

You can't turn the clock back on social media. It's a matter of record.  Ask the Huffington Post.

Update. 1255 CET. I see Iain has now resigned, but the post on the website doesn't inspire confidence that they are really aware of the urgency of the situation.

Update 1340: Iain Overton's twitter account is back up. Glad to see that a statement is forthcoming. There is a lot at stake here.


Update 23.30. Another faceless statement from James Lee., this time it is personal (?), expressing regret and recording Iain's contribution to the Bureau. No prizes for the way this was covered by the Bureau. Silly because they have their own network of supporters. A clearer story would have been much better than verbatim statements. Reminds me of the style the Kremlin used to use.
Posted by Jonathan Marks at Monday, November 12, 2012