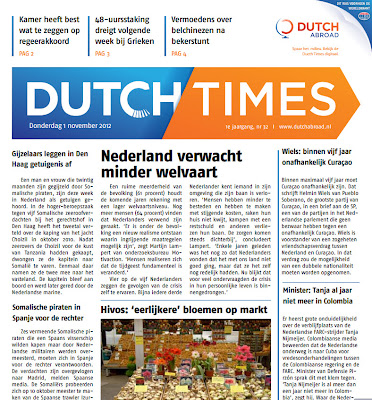 For many years, Radio Netherlands published a daily PDF bulletin in Dutch. It was intended for Dutch speakers living outside the Netherlands. It was a spin-off, started by editors in the Newsroom. It grew from a couple of pages summarising the Radio Netherlands news bulletin to a colour "magazine" including articles, features as broadcast on air, puzzles and the daily schedule of BVN-TV. But with the ending of Radio Netherlands broadcasts in Dutch, a decision was made to end this activity. A small team of editors who were made redundant by Radio Netherlands decided to continue, but then on a purely commercial basis. They announced that as from November 1st, the Dutch Times would no longer be free but that an annual subscription of 72 Euro would be required. 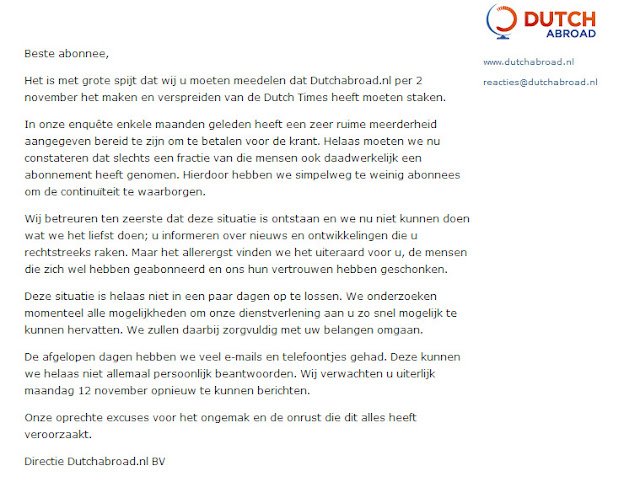 But on November 2nd a message went out from the new start-up that they had decided to suspend publication. Although there was an encouraging response when the concept was first announced, only a handful decided to actually subscribe. And those that did are now rather vocally crying "fraud" on the pages of what's left of Radio Nederland Wereldomroep. Correspondents are annoyed that RNW was "advertising" the new service on its pages until the last moment. The message from Dutch Times says they will issue their next statement before Monday 12th November.

Well does that mean that I lose the money I payed for the subscription?

Most probably, although some are still trying for a refund.