British Radio at 90 - But where's Idzerda? 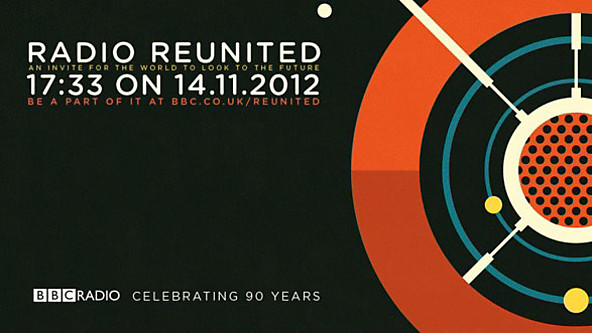 BBC Radio has found a novel way of celebrating its 90th anniversary. It's a welcome distraction to the current management turmoil.

The 3 minute piece will be played out starting at 1733 GMT on all BBC domestic stations today. BBC Press release says:

More than 55 BBC radio stations will come together for Radio Reunited – the first attempt at a simultaneous broadcast since what was then the British Broadcasting Company was formed in 1922. Each BBC station will play the composition, entitled 2LO Calling - a combination of specially written music, iconic sounds from radio’s past and present, and messages to the future from listeners around the world. The broadcast will be hosted by BBC Radio 2’s Simon Mayo, who will present his show from the Science Museum, now home to the original 2LO transmitter on which the first broadcast was made. It is estimated that the historic broadcast has a maximum potential reach of around 80 million listeners world-wide.

2LO Calling opens with the iconic chimes of Big Ben and features the first ever broadcast from the 2LO transmitter. In addition to the vocal messages which were collected, the chaotic wavelength overload features the No 1 tune at the time - titled Three O’Clock In The Morning. There follows elements as diverse as a Morse-coded Bertrand Russell, the blackbird and skylark, commentary from the Cameroon election, with Pashto, Danish and Pradeep (not sure what that's supposed to be, JM)  transmissions, and of course, the ubiquitous pips.
The schedule on BBC World Service said they will have their own programmes. But in fact they did play the 3 minute item. Noticed the Swedish Rhapsody clandestine radio station at the start of the montage.

However, Kim Andrew Elliott notes that the BBC Arabic service will take part in the celebration at 1733. It was the first foreign language service of the BBC, starting in 1938.

There are other programmes to be found here.

I note though that the Science Museum in Kensington, where the old 2L0 transmitter is located, hasn't heard of the Dutch pioneer who broadcast music programmes from the Hague and who even got the Daily Mail as a sponsor. Their website says that broadcast entertainment began in the USA. I would submit that it actually started in the Hague. 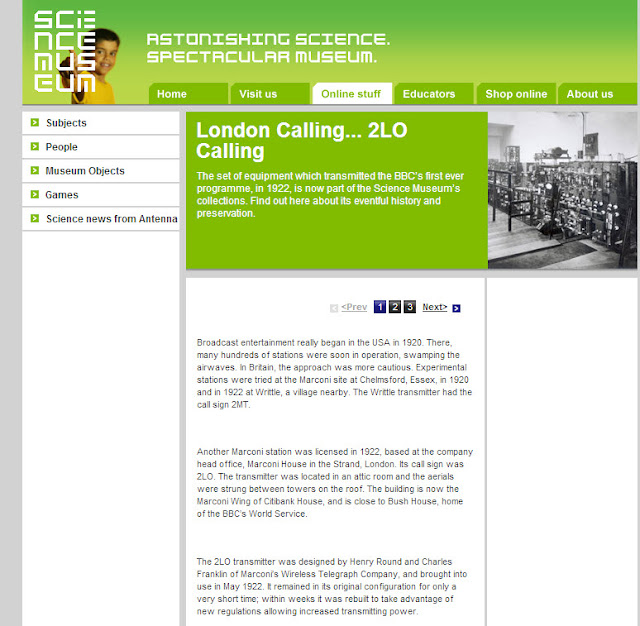 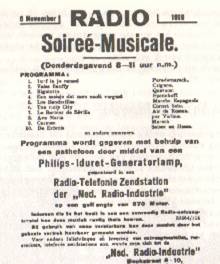 The Dutch public broadcaster VPRO set up a programme called  Studio Idzerda which is named in his honour.

PCGG was the call sign of a privately owned Dutch radio station which was on air from 6 November 1919 until 11 November 1924. Broadcast from the home of its owner, the Frisian engineer Hanso Schotanus à Steringa Idzerda, in The Hague, the station is among one of the world's oldest radio stations and arguably the first commercial broadcaster.
Idzerda was granted his broadcasting licence, which officially limited him to making experimental radio communications between The Hague and Eindhoven, on 14 August 1919. On 6 November he initiated the first official broadcast of his show "Radio Soirée-musicale", the details of which were advertised in a local newspaper. The main goal of his earliest broadcasts was to sell the radio receiver equipment produced by his company, NV Nederlandsche Radioindustrie. It is believed that the microphone and transmitter set-up employed by Idzerda would have been the same or similar to those used in the technique he patented on 24 February 1924. During the Second World War he began part of the Dutch resistance. He was executed in Wassenaar on November 3rd 1944 by the Germans. He had been examining a V2 rocket which had failed on take-off. He was discovered by the Germans and told to clear off. He later went back and was discovered again, this time carrying some pieces of the bomb. The German troops shot him on the spot for being a spy.