Twenty years ago, while leading the strategic reorganisation of content at Radio Netherlands, we were faced with the challenge of trying to set a list of priorities. Everyone could see the arrival of the Internet was already changing the way listeners communicated with the station. We had no WWW, but emails via MCI mail were flooding in. We were running bulletin boards like FIDO as part of experiments to understand our audience better. Unlike fan letters, listeners were giving us a clear insight into the topics that interested them and discussions that couldn't or were not happening on their local media.

We could also see the growth of satellite television, delivering a crystal clear picture into the living room using equipment priced similar to a good shortwave receiver. Could the existing station pivot in time to find new audiences?

We estimated that changes would take at least three years to implement. And we knew that any changes would be very painful to the whole organisation. because the station was operating in 9 languages. At that time, the station transmitted daily programmes in 7 languages (English, Spanish, Indonesian, Arabic, Brazilian Portuguese, French for Africa, and Dutch (World & a separate Caribbean service). There was also an extensive transcription service with excellent quality classical music, jazz as well as drama productions for Latin America and Africa.

Although it seems incredible today, measuring the audience feedback in 1994 was extremely hard. And how on earth could you begin a discussion about what audiences were expecting from a broadcaster in Western Europe if you didn't have accurate audience data?

Annual reports from international broadcasters always quoted "Audience figures" - the cursed "weekly reach" used by larger broadcasters like BBC, Voice of America, and Radio Free Europe. We didn't dispute their figures. But we saw glaring mistakes when these colleagues tried to compare what they were doing with us. They were pushing radio programmes out via their own facilities in competition to local broadcasters. We were building partnerships WITH stations. Something completely different. But many of these local broadcasters didn't have any audience data, nor were they planning to start collecting it. They got huge reactions to live call-in shows though, which indicated that someone was listening. But for the most part, it was guesswork. Remember that the Internet in 1994 was in its infancy.

International broadcast colleagues were also focussed on building a brand name for their network. The name of the station was as important to get in the minds of listeners as the programme content. Why? Because if audience didn't remember the name of the station, you wouldn't show up in surveys. We were more interested in getting ideas across, so programme brands were more important than the network name - just as people remembered the names of compelling TV soap operas but never knew who produced it.

Once local/regional radio took off in Francophone Africa and Latin America, shortwave audiences plummeted. Brazil led the way, with television taking away almost all the international radio audiences. No-one really knew what was happening in the Amazon rain forest, but they weren't waiting for a daily hour broadcast from across the Atlantic. And in the Middle East or North Africa, we could see that unless you were on a powerful mediumwave sender (like the BBC had in Cyprus) there wasn't much hope of building measurable audiences if shortwave was all you had. We were working in markets where FM radio was already stealing audiences away from AM (medium and shortwave). FM sounded better and there were few car radios with reliable shortwave reception.


Fast forward to the 2013 annual report of the US BBG, the body that coordinated US International government funded broadcasting. The BBG broadcasters claim that together they reached an estimated 206 million people each week in 2013, up from 175 million in 2012. Providing news and information in 61 languages across more than 100 countries, the audience estimate is an all time high — and represents a more than doubling of the 100 million people the broadcasters reached in 2000.

The year-over-year increase of 31 million was fueled largely by increases in Latin America, where Voice of America adopted a new strategy of bascially being a free Washington news bureaux for selected stations in Latin America, and in Pakistan, where VOA’s Urdu service successfully launched new programming initiatives. But the increases also came as a result of BBG broadcasters offering content on more platforms. For the first time, the BBG’s television audience outweighed its radio audience – 110 million and 109 million, respectively. Further, the BBG’s digital and mobile audience increased to 22 million, up from approximately 12 million in 2012.

These weekly reach figures sound impressive. But remember that just under 7 billion people are not being reached by any of these stations. So there is plenty to do. I am also fascinated by this upward trend at BBG when audience ratings for TV news in the US are so abysmally low. What program formula has VOA or RFE discovered? 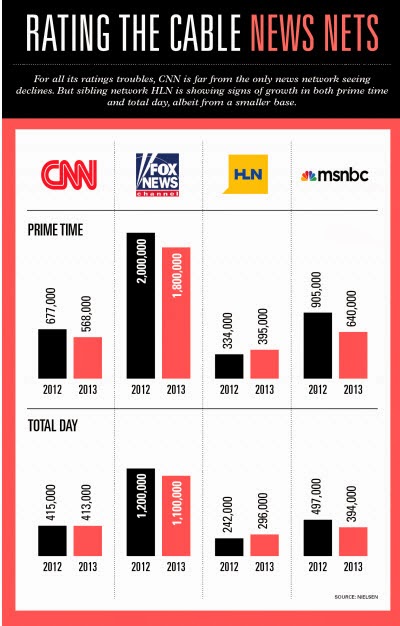 Affiliations and syndication continue to play a major role in reaching audiences worldwide. 65% of the BBG’s television audience and 45% of it’s radio audience is reached via affiliates. Not sure what proportion of the direct audience is thanks to shortwave radio. In countries like Somalia, Sudan and Nigeria I'm sure it's still important. But elsewhere, shortwave is increasingly irrelevant. It may deliver a clear signal - but no-one's listening up on that part of the dial.

In terms of regional composition, 28% of the BBG’s audience comes from sub-Saharan Africa, with Europe/South-Central Asia next at 24%, South East Asia at 19%, Middle East/North Africa at 15% and Latin America at 14%.

Each estimate features year-over-year gains and losses in various countries as conditions change in the local market. For example, audiences have slid somewhat in Afghanistan and throughout much of the Middle East as the media market has become more crowded and competitive. Elsewhere, political turmoil can result in the loss of BBG affiliates or the ability to measure audiences altogether. It is, for example, not possible to research in Cuba, and some Central and South East Asia countries at the level needed to provide statistically sound audience estimates.

Largest Audiences as a Percentage of Population

The data for the 2013 audience estimate come from surveys of adult (age 15+) populations in more than 90 countries conducted around the world over the past 5 years. More than 80% of these surveys were conducted with the previous two years. Additional information available at BBG.gov.
Posted by Jonathan Marks at Monday, January 13, 2014