Is the Netherlands also a fragile state? BBC triggers important debate for me

I remember remarking to Andy Sennitt, then the editor of the World Radio TV Handbook, that one of the challenges of using his media directory was that every entry for each station was formatted in a different way. He responded that you can't build a template because each country uses and develops its media in a very different way. No-one has every really studied why. Media looks simple. Infact building conversations in society is incredibly complex, especially now.

I discovered a research paper and a discussion this week which has brought a lot of threads together. I find the conclusions to be very clear. They build a path forward for the public media discussion in many countries. But probably not in a way the authors expect. 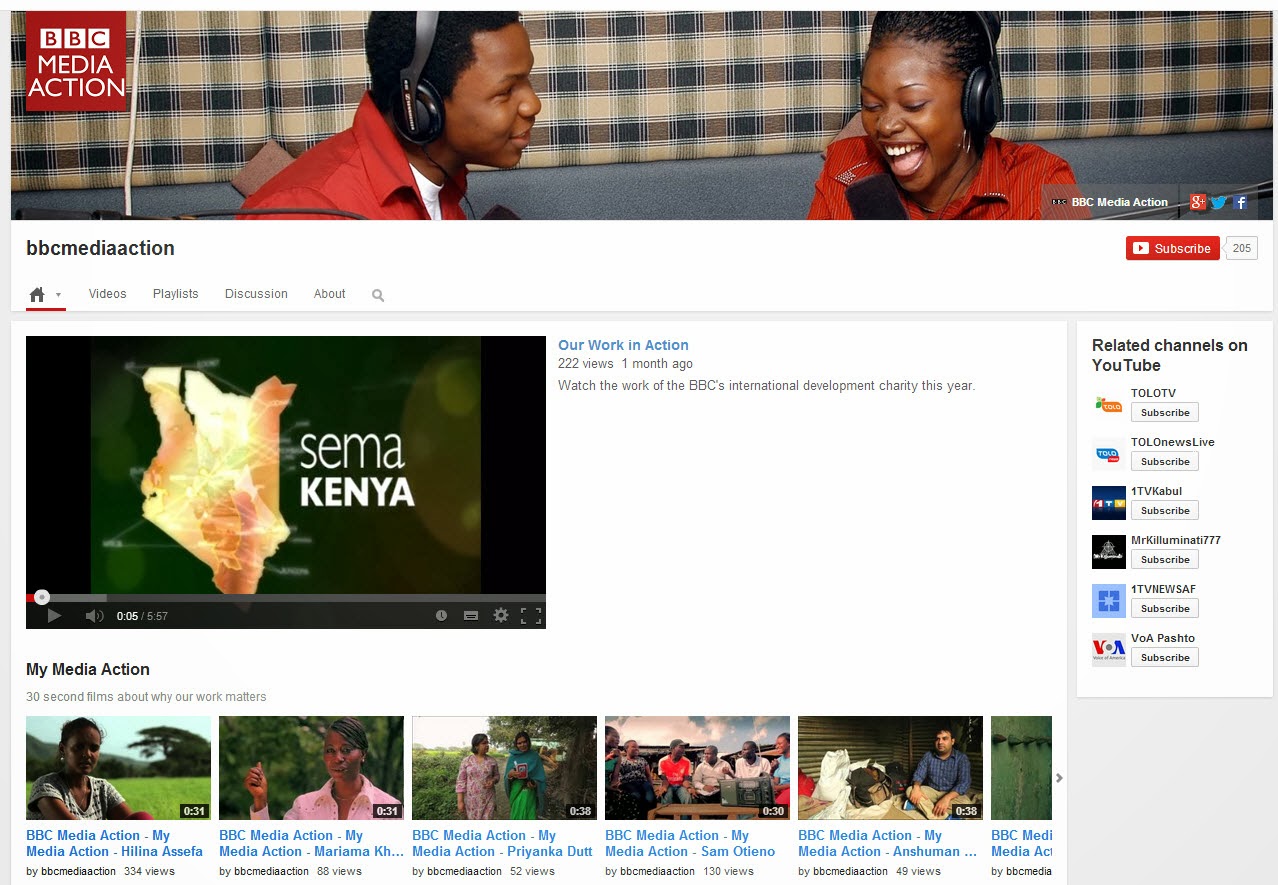 The paper comes from the BBC Media Action, a development organisation with a separate status within BBC Global News. Although BBC World Service and BBC Media Action share a joint heritage, BBC Media Action is quick to point our that the organisations are distinct. BBC Media Action used to just train overseas journalists. Now it studies, organises and executes programmes which have a much wider impact on society. I've been looking at why this work is so important. I found the answers, not in any official BBC video, but in a policy paper that has quickly disappeared into the research section of the website. It's title hasn't grabbed any headlines. But I really hope the content starts a much wider debate.

So what's the problem in unstable parts of the world?

I quote from the executive summary:

The media - defined here as both traditional and digital media – is being transformed in most fragile states. These changes are unleashing unprecedented democratic energy, with profound political and social consequences. Fragile states are often fractured states, divided along religious, political, ethnic or other factional fault lines. For all the fresh potential they offer citizens to hold government to account, new media landscapes are also increasingly fractured – and are often fragmenting along the same fault lines that divide society. Co-option of the media by narrow factional interests appears to be growing.

Successful political settlements in fractured fragile states depend on societies developing a stronger sense of shared identity. In the past, critics of support to media in fragile states have argued that a free and diverse media can foster division, reinforce factional identities and undermine state stability. The prospects of more open, free and vibrant media environments have prompted wariness in the past among those working to support state stability where government and governance is sometimes weak.

This briefing examines how current media trends are affecting state and societal fragility, both positively and negatively. It argues that development actors should embrace the reality and opportunities provided by changed media and communication environments and that the role of a free and plural media should be prioritised rather than – as seems the case at present – marginalised in much fragile states policy.

The briefing argues that shared identity and sustainable political settlements will be best enabled by national and local dialogue. Such dialogue is dependent on a free media that is independent of undue factional or governmental control. Efforts to shut down the media, even if feasible, risk doing more harm than good in fragile states as elsewhere. Support to the media in fragile states designed to minimise the risk of division and maximise the opportunities for dialogue should feature more prominently in assistance to such states.

This paper was the subject of discussion at the Center for International Media Assistance in Washington DC last week. Fortunately the discussion was taped. You can skip the first 8 minutes of introductory preamble and start when James Deane of BBC Media Action begins talking.

My thoughts under the video.

Initiatives working out strategies to support the media seem to be decreasing. We don't see much in the way of a clear, focussed concerted effort to understand the role of media in communication, how can we best understand it, and how can we best support it. We're worried about this lack of focus at both the country and international level.

One half of all development budgets from the EU is spent on supporting fragile states. The problem is that media is often only regarded as a tool for doing something else (like organising a campaign) rather than building social cohesion between divided groups in society. I would argue its the difference between finding new ways to shout a message to a group (which gets the lion's share of funding in 2014) rather than finding new formats to share ideas in society. As we know, isolated communities are becoming a huge problem because they are so vulnerable to extremists which in turn fuel terrorism.

What is a fragile state?

James Deane of the BBC argues that most fragile states are also fractured states – states where often deep fault lines divide communities along ethnic, religious, political or other factional lines. Whether because of scarce resources, corruption, inequality or artificial colonial boundaries that ignore socio-political, geographic or economic conditions, these societies are both politically fragmented and often dislocated from – and ambivalent towards – the state. Conflict, or the threat  of conflict, is high.

The politics of identity in these states may be intensified by their demographics. Fragile states have among the youngest populations and highest fertility rates in the world.13 The countries covered by this briefing – Afghanistan, Kenya, Iraq and Somalia – all feature in the 20 states with the highest fertility rates. So too do the Democratic Republic of Congo, Nigeria, Yemen and several other fractured fragile states. In sub-Saharan Africa, over 70% of the population is aged below 30. More than half of Afghanistan’s population is under the age of 18.

The report argues that as the media fragments in fractured states, many current media and communication trends are reinforcing and intensifying  separate identities rather than encouraging the development of shared identity. However, this briefing also highlights the fact that these trends have positive as well as worrying implications.

Encouraging discussion of shared identity is something that will need to be driven by people, not just by elites, and that the role of the media will be critical to that process.

That for me was the most important line in the report. I always believed that the success of any international broadcaster was based on finding out what two or more countries had in common, not what set them apart. International broadcasters, in general, are not very good at doing dialogue. It's mostly one-way, blasted across a border.

Should we be teaching more than just news journalism?

Around 43 minutes into the conversation above, Michael Dwyer,  (United States Institute of Peace) added an important remark. He's studied Afghanistan media in detail. He notes that the vast amount of media development has happened in urban areas. FM only has a reach until the horizon. Mobile phone and TV networks are also confined to urban areas. In Rural areas, they only get access to the same stations they had a decade ago.

"If its about social cohesion and communities working together, what other kinds of skills should we be teaching people? AMARC pointed out in 2002 that we should be careful not just to train people to do news journalism. We should think about communities. What role can ordinary citizens play as communicators? Maybe station managers need to understand more about mediation?"

James Deane concludes his remarks by highlighting serious concerns about the future of public dialogue.

We're seeing many new vibrant (social) media in many countries. But we are worried that only markets, economics, and politics are driving the development of media at a local level. We don't see the emergence of kind of media that is capable of enabling dialogue across fracture points in society, across political and religious divides and across the ethnic divides. Where is it going to come from?

Public conversation needs to happen where people who disagree with each other can have those disagreements peacefully and in public? How will they argue out their issues, forge their common destinies through public debate rather than fragmented localised, micro-debates?

I share their concern. But that begs the question.


Is it only fragile states?

The importance of public media as a way of bringing people together, sharing ideas instead of shouting them, applies much wider than these "fragile states". I note that none of the countries in North Africa are not regarded as fragile by the OECD. 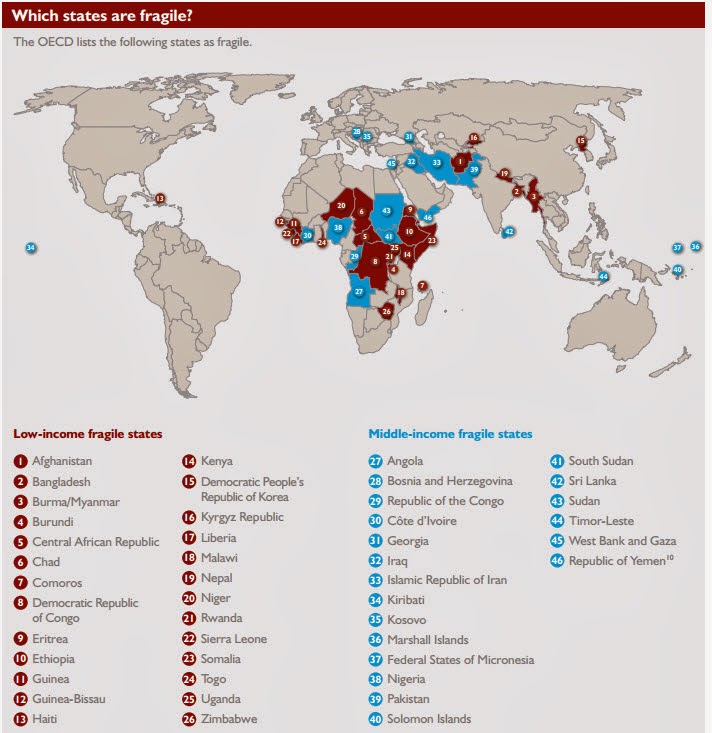 I believe this map is VERY incomplete. Looking at recent riots in Turkey, China, Greece, Northern Ireland, Ukraine, Spain, and France. Our domestic news media are poor at reporting on the reasons for riots in these other countries. Even though the last major riots in the Netherlands were in 2012 (when a Facebook party invite went viral), I fear the quality of dialogue in society here is much less than a decade ago.

We're escaping to the present (real-time social media platforms) and becoming obsessed with what's happening now. We're supposed to be living in the age of context. Infact its all disconnected content. Dialogue on our common future is difficult to find.

We are seeing more war-lord media, elite media, and hate speech. And it is not confined to fragile states at all. Public media is being re-organised at the moment in many countries. It's almost always using economic arguments.

I don't see anyone debating about how we can develop cross-media formats to build cohesion in societies. Different countries obviously require different approaches. I believe we can learn a lot by holding up a mirror. Are the failures in the fragile states in danger of being repeated here? I believe they are.

I think BBC Media Action has just explained the path that current international broadcasters need to consider. I noted this week that Deutsche Welle has already realised they need to do more than event journalism (breaking news) in order to become more influential. BBC World Service radio is doing some of these aspects, but not all by any means. Are there others you know of?