Just clearing out some old stuff at Mission Control. Bumped into a brochure I wrote in 1993, following a visit to the Radio Netherlands Bonaire relay station. It told the story of the reasons for building the facility and how it operated. I'm gathering these memories together for an e-book to be published later this year. Interested in sharing? Then leave a message.

The team actually contributed to the island society in many ways - being technical experts in diesel power as well as transmission technology. I always thought they should have turned it into a regional technical expertise centre for the entire Caribbean. But then wasn't in the mandate. In the end, the decline of shortwave sealed the station's fate. Disrupted by the Internet.

Ron Gijzen made this photo on the island of Bonaire. It shows one of the 17 transmission masts on the ground at the old Radio Netherlands relay station. The station is being dismantled and in the middle of November 2012 the antenna masts were taken down. So ends a famous shortwave radio station, which was always ahead of its time in the use of technology. It has a special memory for me as one of the broadcasters over those masts on the Northern side of the island. 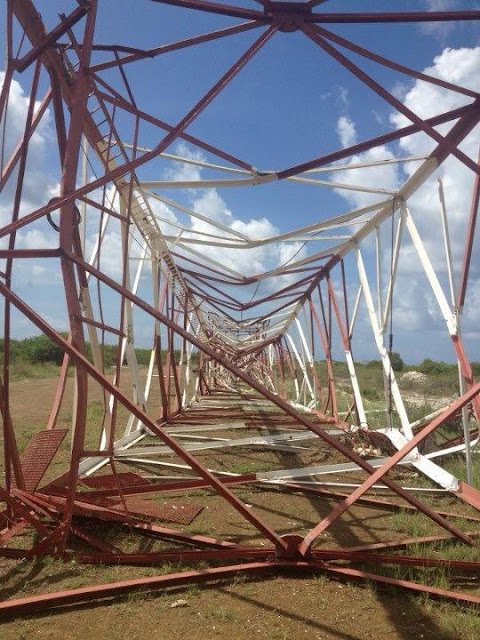 I was fortunate to visit the island in 1989, 20 years after it was built, to make a radio profile of the work there. You can listen here.

I don't deny I had a lot of fun making that particular programme. It is March 1989 and I realise there is nothing in the RNW archive about the great work that goes on at the relay stations and the story of how the satellite changed an entire industry. I combined it with reportages on the other ABC islands. Curacao was nice, but the beauty on Bonaire, especially under the water, was spectacular. I remember meeting a great Aruban engineer working at the station who actually swam to work. This programme was made before the admin building in Kralendijk was closed and the building expanded for the DRM capable transmitters. 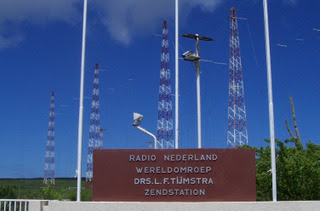 I think all of us who worked at Radio Netherlands can be thankful for that extra boost the relay station gave to our programmes. Without it, the signal - and the impact - would never have been as strong, especially in the America's and West Africa. Thank to all the engineering crews in the background - not only keeping the place running for 18 hours a day but also to the Frequency managers back in Hilversum who made sure we were always on the best spot on the dial. It was a small station (only 2 300 kW transmitters at the time) but with huge influence.

Wonder if you have special memories of listening to the station? It certainly had several stories during it lifetime, including surviving fires and rats.


Local newspaper on Bonaire captured the antennas at the Radio Netherlands Bonaire transmitter site being destroyed. I see other reports from the island that the diesel generators have been donated to the island for a symbolic US$1. 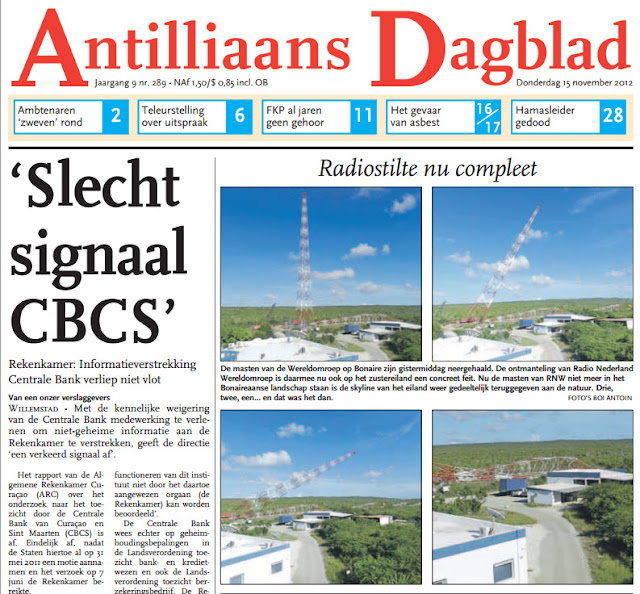