RT and VOA TV to Africa - Switched at Birth?

This is bizarre.
Watching the Voice of America YouTube channel to Africa and comparing it with Russia Today. It is like they were switched at birth.


VOA looks like broom cupboard TV where radio presenters finally get to be TV personalities. The set design must have come from the 1960's. I've never seen so many "bugs" in the picture to remind you you're watching VOA. Presenters don't realize there is something called a lower third. And the general look and feel is rather like Radio Moscow World Service sounded like in the 1980's. Scripted ad-libs. And a sports presenter holding a ball (in lieu of sports footage?). And the total number of viewers for this week's show was 11.

Was this one of the reasons that prompted Michael Lynton to resign from the US Broadcasting Board of Governors this week, leaving the same day he sent a letter to President Obama? This follows the rather sudden departure of the previous chairman Walter Isaacson (the Steve Jobs biographer). 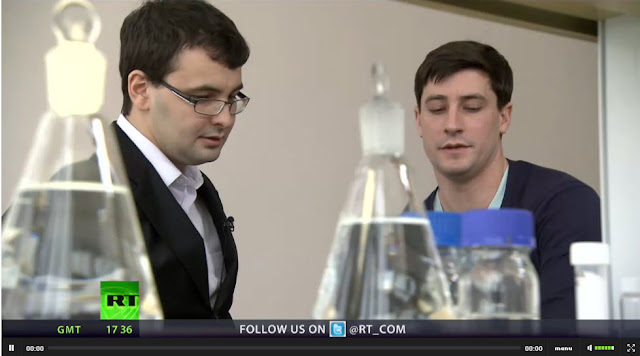 Meanwhile in Moscow, Russia RT certainly has a look and feel that looks more like Al Jazeera, Fox News and CNN rolled into one...in other words they have taken elements of each and made something of it. They certainly know how to market their content through YouTube, Vod.io,...it's everywhere where the VOA is not. How much are the Russian's spending on RT? $355.6 million in 2013 apparently.