If you say Madagascar to most people, they either tell you it's the name of the Dreamworks series of films started in 2005.....


Or it's the name of the fourth largest island in the world where more than 90 percent of its wildlife are not found anywhere else on earth.  There have been some excellent documentaries recently - Last Chance to See with Mark Carwardine has visited the island several times, most recently with Stephen Fry.


For me, it is different. I first associated the name Madagascar with the shortwave relay station set up by Radio Nederland Wereldomroep and opened officially in 1971. Constructed on a site a few dozen kilometres from the capital Antananarivo, the facility was originally designed to improve the global coverage of what was then the "Dutch World Broadcasting System". I was working at the station in the Netherlands, doing various things, including hosting a show called Media Network. Without the Madagascar relay station, audibility of the programme would have been poor in Southern and Eastern Africa.

Back in the 1970's, the increasing congestion of shortwave transmitters in the international shortwave broadcasting bands made it desirable to select a transmitter location as close to the reception area as possible. This particular relay station was used by RNW to serve countries in Africa, the Middle East and South Asia, as well as Indonesia and Western Australia. All these areas are within a radius of 10,000 km and can be reached well from Madagascar on shortwave throughout the year. 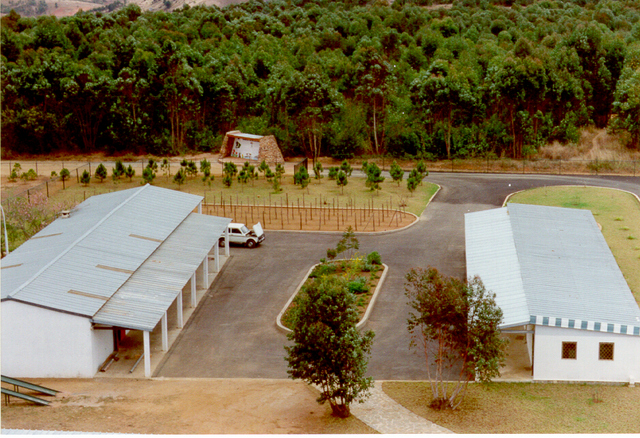 Radio Netherlands' negotiations with the Malagasy government were successfully concluded in 1967, though the official "go ahead" from the Netherlands government was not received until one year later.  When first constructed, the relay station consists of two centres located some 10 km apart. This was necessary when the station was first designed, as news programmes were transmitted over a shortwave single-sideband link from Kootwijk in The Netherlands and then mixed with pre-shipped feature programme tapes sent from Europe.

The relay transmitters were built some 10 km away, further North, so as not to interfere with the reception site. Two digitally controlled Philips short-wave transmitters were in operation, with a carrier power of 300 kiloWatts each. These transmitters were usually used independently, broadcasting the same programme material on two different shortwave frequencies. But it was also possible to combine the transmitting power in the antenna to 600 kiloWatts, in cases where persistent interference or bad propagation conditions make this necessary. That wasn't done very often.

There are 13 antennas at the relay station, eleven of which are threeband-antennas and can transmit in three adjacent short-wave bands (e.g. 11, 15 and 17 MHz). These antennas consist of self-supporting masts (similar in construction to the Eiffel Tower in Paris) between which an array of horizontal dipoles has been erected. Depending on the main directions of radiation required, a grounded reflector network or a second dipole array has been built behind this first network. 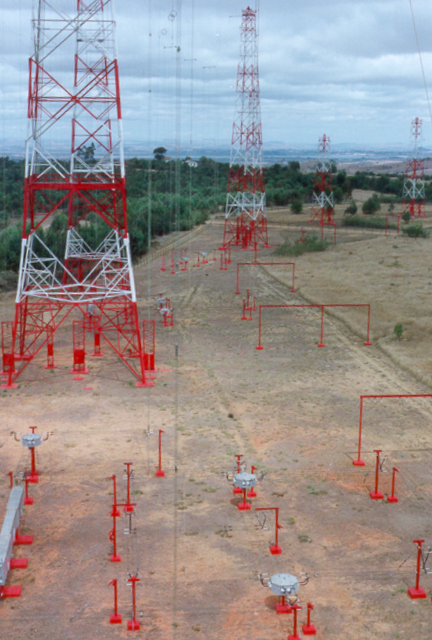 The height of such a short-wave antenna depends on the wavelength used. For the lower frequency bands, antennas of about 100 metres high have been built on the site in Madagascar. In order to further increase the number of target areas that can be reached from the relay station, an electrical system is used to alter the main direction of radiation. It can be varied over an azimuth of 15 degrees to the left or to the right of the normal direction. The antenna site was designed and developed by the Swiss firm of Brown Boveri.

The island is around the same length and breadth as the British mainland and is separated from the African continent by the Mozambique Channel. At the Indian Ocean end of the island, the country is protected by a high mountain-ridge which fortunately limits the damage inflicted by the cyclones or hurricanes prevalent in this area.  That's important if you are planning to put up antenna masts! Behind this ridge are the "hauts plateaux", the upland plains ranging  between 500 - 1700 metres above sea level.

When satellite time was expensive....

There used to be a direct link between the studio's of Radio Netherlands in Hilversum and the Madagascar relay station using one of the early telecommunication satellites in geostationary orbit above the Indian Ocean. To achieve a broadcast sound quality on AM, it was necessary to transfer an audio frequency bandwidth of between 50 and 5500 Hz. A normal telephone channel, however, is not capable of transferring frequencies exceeding 3400 Hz.

To overcome this, Radio Netherlands pioneered a system using two telephone lines, instead of one. The 50 to 5500 Hz audio spectrum from the Hilversum studio is split into two parts, by an early system of frequency shifting. At the relay station both the upper and lower parts were transformed back to their original values and reunited to form the original audio spectrum again. The result is a higher quality audio link with sufficient quality for shortwave broadcasting. This system ran from 1978 to 1994 when it was replaced with digital satellite technology.

Last year, Radio Netherlands ended all its shortwave transmissions as part of a major re-organisation. That included cessation of all the broadcasts that originated from the Madagascar relay station.

The other Radio Netherlands shortwave relay station in the Caribbean, on the island of Bonaire, was demolished. But not before the two Thomson and one ABB transmitters from Bonaire were dismantled last December. Parts which could be used were transferred to Madagascar. The container just arrived at the end of April 2013. Only a few remaining parts were sold for scrap.


The original Philips 300 kW transmitter in Madagascar has been removed to make way for two ABB transmitters which used to broadcast the programmes of Radio Sweden from their site in Hörby. The other Philips transmitter is still in place but is used only as a backup. It's has done sterling service for over 40 years.

(Radio Sweden's antennas were demolished. The transmitters were sent to Madagascar.)

Rocus de Joode, who used to be in the frequency management department of Radio Netherlands is currently a consultant for the Talata Volonondry shortwave station. He explained to me that they have made the old RNW relay station into a small private company. It fulfils a need for lifeline services to parts of the world that others have forgotten.

Although Radio Netherlands is no longer a client, they are broadcasting programmes which are compiled in the Netherlands and elsewhere before being broadcast on short-wave to countries in Africa.


Take Radio Dabanga for instance. This station which targets listeners in Sudan has built up a very loyal following in Central Dafur. Although it may at seem old fashioned, shortwave radio is currently the most efficient way of reaching over 50,000 refugees who have fled the fighting which flared up again in Eastern Dafur at the start of April 2013.  The current daily shortwave transmission schedule is here. 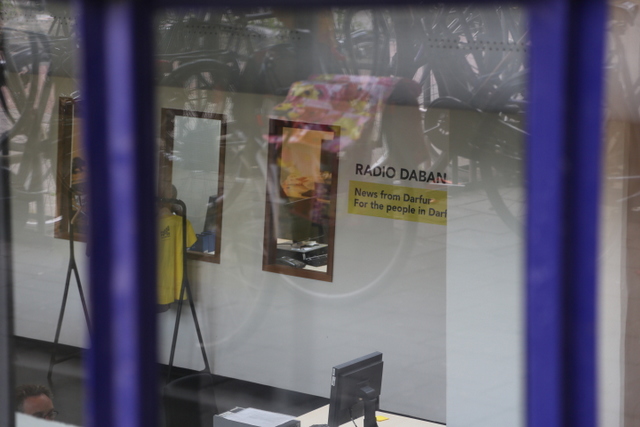 The relay facilities in Madagascar also broadcast another programme in Arabic and Dinka which is called Radio Tamazuj. This is a daily news service for the contested border areas between Sudan and South Sudan. Like Radio Dabanga, this independent station has built a network of correspondents in the region. Although the aim is to get coverage on FM some day, the shortwave transmissions are strong and well received.

The relay station used to produce its own calendar, usually showing pictures from the site. How times have changed. I wish the crews well.