The ADE 651 is a small device the Iraqi military uses at checkpoints to detect bombs in and underneath cars. There's just one problem: these little wands were proven to be ineffective three years ago. The Wikipedia article says they were assembled in a former dairy in Somerset.

The ADE 651 consists of a swivelling antenna mounted via a hinge to a plastic handgrip. It requires no battery or other power source; its manufacturer claimed that it is powered solely by the user's static electricity. T

To use the device, the operator must walk for a few moments to "charge" it before holding it at right angles to the body. After a substance-specific "programmed substance detection card" is inserted, the device is supposed to swivel in the user's hand to point its antenna in the direction of the target substance. The cards are claimed to be designed to "tune into" the "frequency" of a particular explosive or other substance named on the card. According to Husam Muhammad, an Iraqi police officer and user of the ADE 651, using the device properly is more of an art than a science: "If we are tense, the device doesn't work correctly. I start slow, and relax my body, and I try to clear my mind."[10] The cards were supposedly "programmed" or "activated" by being placed in a jar for a week along with a sample of the target substance to absorb the substance's "vapours". Initially, McCormick reportedly used his own blood to "program" the cards for detecting human tissue, but eventually gave up even the pretence of "programming" them when demand for the devices was at its peak.
The promotional material issued by ATSC claimed that the ADE 651 could detect items including guns, ammunition, drugs, truffles, human bodies, contraband ivory and bank notes at distances of up to 1 kilometre (0.62 mi), underground, through walls, underwater or even from aeroplanes at an altitude of up to 5 kilometres (3.1 mi). The device is said to work on the principle of "electrostatic magnetic ion attraction".[12] According to the promotional material, "by programming the detection cards to specifically target a particular substance, (through the proprietary process of electrostatic matching of the ionic charge and structure of the substance), the ADE651 could “by-pass” all known attempts to conceal the target substance. It has been claimed to penetrate lead, other metals, concrete, and other matter (including hiding in the body) used in attempts to block the attraction.
Prosec, a Lebanese reseller of the ADE 651, claimed on its website that the device "works on nuclear quadrupole resonance (NQR) or nuclear magnetic resonance (NMR).  McCormick told the BBC in 2010 that "the theory behind dowsing and the theory behind how we actually detect explosives is very similar.

I cannot believe how anyone could be taken in by this mumbo jumbo. Reminds me of the plastic strip that used to conduct static electricity away from your car, making the occupants less prone to car sickness. Only the ADE 651 must have cost lives... 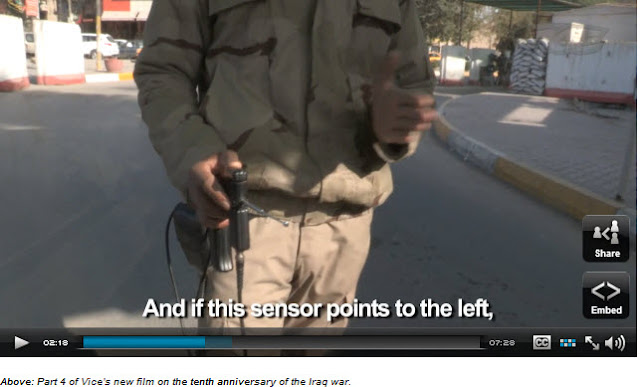 Last month a good piece of investigative journalism by Motherboard was published uncovering the true extent of the sales of these fake bomb detectors which must have given so many false hope.

Tragically, they are still in use. The AM/FM antenna stuck on the side makes it look as though it is detecting something.

UK Channel Four reported this evening that justice has finally been served on the British fraudster.

Former policeman James McCormick is jailed for 10 years for what an Old Bailey judge described as a "callous confidence trick" in selling fake bomb detectors to violence-torn countries.

In a scam worth over £50m, McCormick sold the phoney devices - which were based on a £13 novelty golf ball finder - to customers around the world including the United Nations. 7,000 devices were sold - many to the Iraqi government. One invoice showing sales to the country exceeded £38m over nearly three years.