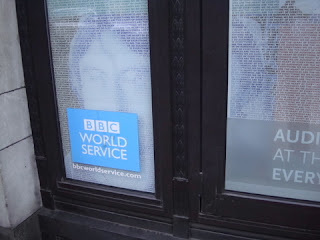 Just read a really awful article in the Guardian about BBC World Service. Facts are taken off the recent documentaries, but Rupert Sawyer is just playing critic rather than listening to the output. Seems to write so he can get Twitter followers. Why does the Guardian commission this sort of rubbish? Charlie Brooker it is not.

So what has really changed at BBC World Service? It was interesting listening back to the old promo material of BBC World Service in the 1990's in the past few weeks and comparing it with the sound now. It's a lot tighter, but because continuity has been eliminated, it's a lot less personal. There were remarks about the weather in London which added a shared experience - a little dash of colour. The range of programmes has been drastically reduced in English and that, for me, means less time spent listening.

BBC WS radio is certainly the station for other news journalists. I think programmes like Newshour and From Our Own Correspondent have improved. But I miss the smiles I get on other networks - like the News Quiz on BBC Radio 4. That programme is radio's equivalent of the Daily Show. It's very powerful satire. Helps put the current affairs programmes into perspective. 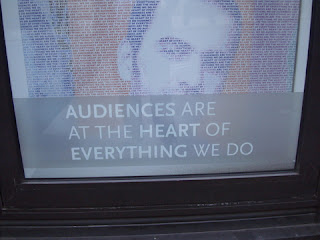 I think it's time to rethink the Feedback shows on BBC WS - whether it is World Have Your Say or Over to You.  They are becoming empires within their own networks, as though these programmes are the only place where listeners "can have their say". This doesn't happen on BBC domestic radio, so why in external broadcasting?

I believe the approach that , for instance BBC Radio 4 PM takes, to integrate the blog and social media comments into the regular programmes is equally important. Because then listeners feel more involved in all the programmes, not just the feedback shows. It needs a light touch - just a hint of colour. I don't hear many smiles on the World Service any more. And comedy on the network didn't make it into this century.

Yes, true enough Johnathan, however, I think you may be overlooking the point.

Radio is a distinct medium from the newer 'social media', and feedback from OTHER sources are as if not more valuable in determining what works and what doesn't. You hint that you might get it when you point out that the BBC WS is not the same as it once was. Your point, I think can be best expressed by observing that what is going on now, is not BROADcasting, but rather 'narrowcasting', and frankly we are all a little poorer because of that.

Ashton Kutcher has 13 million 'likes' on facebook and the BBC World Service, which has tried and tried to promote its facebook link has 78 thousand, and 400 yes, just 400 monthly users of the "bbc app" whatever that is. Am I really the only person who sees the disconnect there? A service that has hundreds of millions of weekly users pulls 78 thousand 'likes'? Perhaps the audiences are different ... don't you think?

The OLD BBC was a radio service praised by world leaders and starving tribesmen in drought ridden areas of central Africa alike. And we want to change it 'because the world is different'? Hogwash. And the fact that those changes are by removing proven effective radio production values and eliminating transmitters so nobody can hear it any more is even more callous.

How is all this amazing short-sightedness happening and the so-called 'experts' don't seem to 'get it'?

Yes, there are certainly now fewer smiles across the miles, and not just because Eddie Startz died in the 1970s .... but because people making international radio today don't seem to understand what good radio sounds like!

Hello Radioguy. I do believe that radio is part of a total media mix which varies per country. But it isn't TV without pictures and it can do so much more than just act as a newsmachine. Much better than TV discussion.

This article on the Guardian you referenced just has to be satire. Even Glenn Back sounds like a reasonable person compared to that guy's rambling.