Newsday is Not Working (yet)

This parody rather reminds me of the new format of BBC Newsday on BBC World Service. Sadly it fails to impress at all. Replace the word elections with Olympics and it sounds very similar. Except that its television on radio.


The title for the new show - Newsday - is spot on. Unfortunately it sounds like Newshour dragged out to fill half a day on air. It might work on TV - as it is at the moment it sounds like BBC's Breakfast Time mixed with World Have Your Say and Grandstand. Coming live from the market didn't add anything except background noise and those eating their breakfast at that time of the morning had nothing to add to the conversation. It was so relaxed as to be meaningless. At that time of the morning I'm looking for a briefing, If I want gossip, or to see breaking news, there's TV. Neither of these formats work on the radio - they annoy the older listeners and they don't reach the younger demographics who are far more attuned to TV/video. 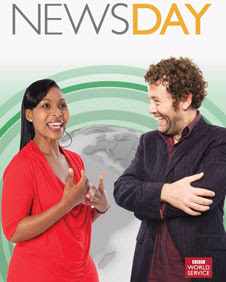 So if this was the answer, what on earth was the problem? The World Today and Network Africa were too expensive as independent productions. But now we have a regional morning programme that's trying to be an evening show in North America. It reminds me of the BBC 648 trilingual experiments to Europe which didn't work because there was no thread to the programme that anyone could follow. It sounded interesting to non German/French speakers - extremely repetitive to those that did.
I must say I have a dejavu experience when you check the Wikipedia entry for Up to the Hour. I remember that disaster when I still at school.

Up to the Hour was a programme on BBC Radio 4 that ran from 1977 to 1978. There were two editions each weekday morning, each approximately 30 minutes long and finishing at 7am and 8am respectively. Both parts were followed by the Today programme, which during this period was also broadcast in two parts. The original theme tune was Tambourin by François Joseph Gossec, performed by James Galway.
In 1977 the then-controller of Radio 4, Ian McIntyre, cut the length of a number of news and current affairs programmes, in the belief that this would improve their overall quality. In the case of the breakfast programme Today, the reduction from two hours to one was achieved by splitting the programme into two.[2] The gaps created were filled by Up to the Hour, which consisted of lighter items such as music, sport and trailers for upcoming programmes. It also incorporated the existing religious slot, Thought for the Day. The new format was unpopular with BBC staff, including announcer Peter Donaldson who on at least one occasion openly ridiculed the programme on air.[3] It also provoked comments in the diary columns of the daily newspapers. By the end of 1978 Today had returned to its previous length and Up to the Hour had been dropped.

I wonder what the reaction from the partner stations will be, who have carried Network Africa up until now? How does adding input from Johannesburg add to a coherent storythread? I don't feel drawn into the conversation because, frankly, I'm not in the mood for a phone in show at that time of the morning.
There was a sign outside Bush House that said that "audiences are at the heart of everything we do". If Newsday is to survive it has to refocus and rethink the information need of the audience it is trying to serve. One conclusion might be that trying to serve two audiences like this is Mission Impossible. They could take a leaf out of the presentation styles of PM and the World at One on BBC Radio 4, and/or peaktime programming on Radio 5.
This was also an unfortunate week to launch bearing in mind that because of rights restrictions there is no on-demand version of this marathon show available until August 13th when you-know-what is over.
I'll dip in now and then to check. I know it takes time for any programme to settle in. But I will also explore alternatives.

There seem to be several people in the control room at any given time so that it's nearly impossible to tell who is speaking to whom (hosts? guests?).

There appears to be no direction, in any sense of the term.

I just can't believe the BBC is actually involved with this cluster****.

Is there reason to hope?

There seem to be several people in the control room at any given time so that it's nearly impossible to tell who is speaking to whom (hosts? guests?).

There appears to be no direction, in any sense of the term.

I just can't believe the BBC is actually involved with this cluster****.

Is there any reason for hope?