StartupBootcamp and the Rise of Silicon Polder

So what just happened at the Amsterdam HQ of the ABN-AMRO Bank?

I feel both privileged and proud. For the last 90 days I've been intensively involved with 10 start-up companies working out of the 6th floor of the Vodafone building in central Amsterdam. I've been mentoring teams, helping them to create, build and develop their story for their pitch to investors on what's called "Demo Day".

I thought it was going to be a simple matter of polishing the English. An hour or so, sharpening the phrases, perhaps working on the delivery. Wrong. I'm glad I discovered this with time to spare. If you leave it until the last month, it's more like international rescue. Too late to be of lasting value.


I quickly realized that powerful, persuasive storytelling is far more than pitching. It's not shouting from a stage. OK if you're selling fruit on a market stall. Useless if you're trying to share an idea.  And Europe is not North America. Only 3 of the 10 start-ups were pitching in their native language.

You have to draw the audience in, share, excite, explain, amuse, and be crystal clear in what you ask for. It meant I became a story-producer in residence, especially for the last 60 days. My role has been to listen, create, compose and conduct. That can only be done with the teams, not for the them. Since they will pitch on demo day, not I. And having a powerful, authentic story is critical to get noticed - and getting funded. 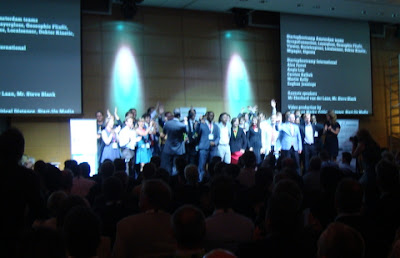 It reminds me far more of documentary making than working in a TV/Radio newsroom. You're not reporting on an event. You're doing due diligence on an idea, delving deep into the fundamentals of how and why it should be turned into a business. There's fact checking, competitive analysis, discussion, debate. And hours of thinking and listening.


As keynote speaker Steve Blank emphasized today, start-ups are NOT smaller versions of large corporations. They are working out hunches from the founder. They are pivoting their idea as they search for a sustainable business model. Some hunches are spot on. Other assumptions will be way off base. So the story is written and re-written. It's often iteration until 2 o'clock in the morning.

There were plenty of times in the last few weeks when I realized we couldn't just adapt the storyline. Everyone in the audience on July 6th can see through the patchworks in the argument. Especially if you're on stage in front of 400 people. To shine on demo day, you really had to start again.

On average, each of the ten teams wrote and re-built their story four times. And pitched their 8 minute story hundreds of times. in doing so, then went from first class to world class. That's what an accelerator is all about. My son Christopher (Christopher Marks Productions) and Klaas Kleiterp (owner of Digital Message) collaborated with me to shape the video sequences. We experimented with various story-telling techniques - combining the stunning pictures that DSLR cameras can capture with strong statements recorded with good microphones.

The video below opened StartupBootcamp Amsterdam on July 6th in the ABN AMRO HQ. The founders explain why they took a different approach to being a catalyst for innovation. Enjoy.