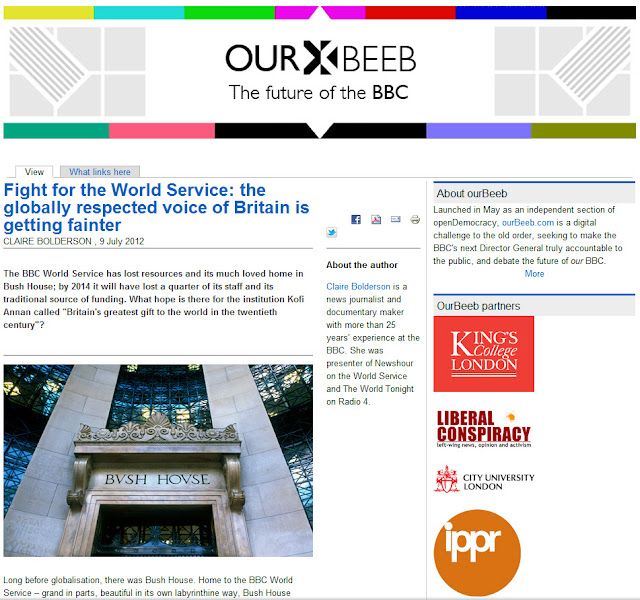 I see that the Open Democracy movement in the UK has opened a special website to make the BBC more accountable to the public. It has some interesting points for debate, although I believe the fact that one of the sponsors is the Liberal Conspiracy will lead to charges that it has a political left agenda. the article by journalist Claire Bolderson shares the fear that many World Service staff have that the recent downsizing of the station means that its future is much less secure. It's not clear though what we need to do to Fight for the World Service. I believe BBC World Service is right to pursue a cross-media strategy making a relevant mix of radio, TV, online and mobile if it wants to maintain influence in certain parts of the world. I hope that the radio will complement the TV offering, since radio is so much better for analysis and discussion - content drives form, whereas TV is always form driving content.

I dip in and out of BBC WS rather than listen for long periods as I used to - repeat cycles are much higher and the programme range doesn't match BBC Radio 4. I find feature programmes like Click! on the radio have suffered since the integration with TV versions in a way that could easily have been avoided. There was a battle for budgets and TV clearly won. I find that the uncut podcast versions are better than what is squeezed in on air.
Posted by Jonathan Marks at Friday, July 20, 2012