It's 1105 Greenwich Mean Time on July 12th 2012. A rather momentous moment for those of us in international broadcasting. For the last news bulletin has just been read from the studios of Bush House. Iain Purdon is the last human voice heard from the building on the BBC radio airwaves. 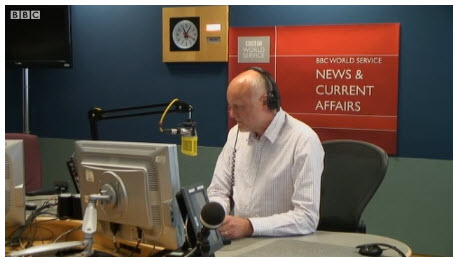 The staff of the BBC World Service have been gradually leaving Bush House and move into its new home at BBC Broadcasting House at the Langham. There have been some tearful on-air farewells (Julian Marshall on Newshour on July 1st for instance). I can imagine why. Foreign language broadcasting builds strong families because of a common purpose. The walls of Bush House must have heard more stories than many hundreds of buildings in London put together. I saw an interesting article yesterday about how the contents of the studios are being sold off at auction. Some of the studios were quite new - others more like museum pieces.

I was pleased that Newshour honoured the late Pete Myers by including his famous "Goooooood Morning Africa" call in their sign-off piece. I often thought he must have inspired Adrian Cronauer's famous call in Good Morning Vietnam, although, apparently, the film was largely fictitious. Pete later came to Radio Netherlands to start Afroscene and Mainstream Asia. I remember him showing me his scrapbook of newspaper cuttings compiled during his days in Ghana and at the BBC African Service.


How quickly will the memories fade?

I do wish the BBC World Service would compile one page with all the tributes to Bush House. I note that some of the programmes are already getting disconnected, appearing on different pages. And I'm sure that some will disappear forever as they descend to the bottom of archive. So, I've made an audio compilation of what I heard about Bush. I can hear a characteristic 50 Hz hum in the background to the documentary from John Tusa. But only on the bits that he voiced. They weren't doing much to maintain the studios in the last couple of years.

Two videographers have made a superb video compilation of the now empty Bush House. They've used bits of the John Tusa documentary as a background. Beautiful - a great tribute. Shame it is not shareable. It should be, just this once.


And that reminds me that Margaret Howard, a familiar voice on BBC World Service in the 60's, 70's and 80's, also mentioned her work as a studio manager in Bush House.