US International Broadcasting in Dysfunctional Tailspin 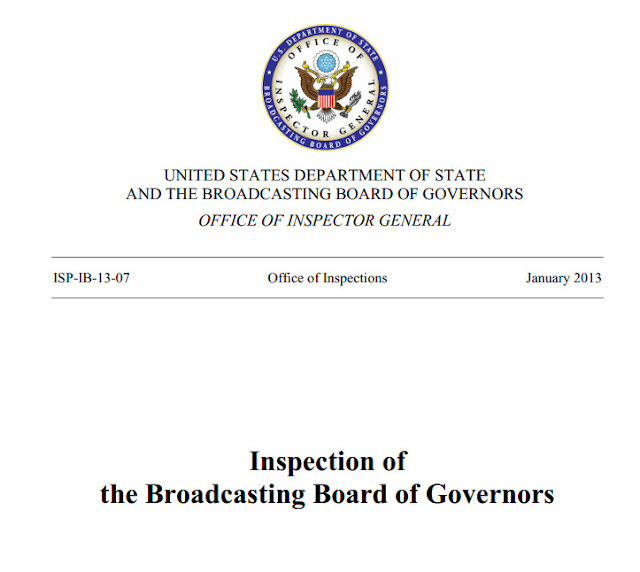 I got the impression that Walter Issacson (yes of the Steve Job's book) was at least trying to steer the ship while he was the Chairman of the Board. Since his rather sudden departure last year, the BBG has disintegrated into a vitriolic quagmire of acute internal dissension. The on-line meetings of the board have become the laughing stock of the industry - a collection of dog and pony shows and very detailed descriptions of operational matters far removed from the core issues facing the whole industry. No-one would care if it wasn't costing the US taxpayer a fortune, especially in the delays to implementing much needed strategy. The OSI singles out Governor Victor Ashe, (although avoids mentioning him by name) for special criticism. Whilst he has done a lot more than others to defend the rights of those working in the current stations (which is remarkable for a Republican), his long-drawn out style means a complete culture clash for an organisation struggling to move into the 21st century, let alone become a modern, cross-media agency.

So what needs to happen next?


They have weeks not months to sort this out. If Facebook can grab the ear of President Obama so he signs legislation covering trivial matters, some direct action for this fiasco is way overdue.


• U.S. Government broadcasting is characterized by journalism of the highest caliber and a
widespread devotion to supporting democracy and freedom. This ongoing achievement is due
to the commitment of the broadcast entities and professional staff.
• The Broadcasting Board of Governors (BBG) is also committed to the goals of U.S.
international broadcasting but is failing in its mandated duties, including implementation of
key aspects of its 5-year strategic plan. The Board’s dysfunction stems from a flawed
legislative structure and acute internal dissension.
• The Board is composed of nine part-time members, including eight private citizens who carry
the title of Governor and the Secretary of State (ex officio). A part-time Board cannot
effectively supervise all U.S. Government-supported, civilian international broadcasting. A
chief executive officer (CEO) could coordinate the operational aspects of the broadcast
entities and their support structure.
• Although the legislation establishing the responsibilities of the Governors is clear regarding
the boundary between supervision and day-to-day management, individual Governors have
interpreted the law differently and determined their own fiduciary responsibilities, which has
in turn impeded normal management functions.
• Board dynamics are characterized by a degree of hostility that renders its deliberative process
ineffectual. Board meetings are dominated by one member whose tactics and personal attacks
on colleagues and staff have created an unprofessional and unproductive atmosphere.
• Chronic vacancies and absences of Board members threaten the quorum required for the
Board to act, limit the diversity of perspectives brought to discussion, and put at risk the
bipartisan nature of the Board.
• The Board’s bylaws and self-adopted governance policies are inadequate to govern
appropriately the conduct of Board business.
• The system of having BBG Governors serve concurrently on the corporate board of the
grantees creates the potential for—and, in some cases, actual—conflict of interest, as
perceived by many and gives rise to a widespread perception of favoritism in Board
decisions.
• A comprehensive travel policy that relates Board travel to strategic objectives and followup
actions should be implemented.
Posted by Jonathan Marks at Monday, January 21, 2013