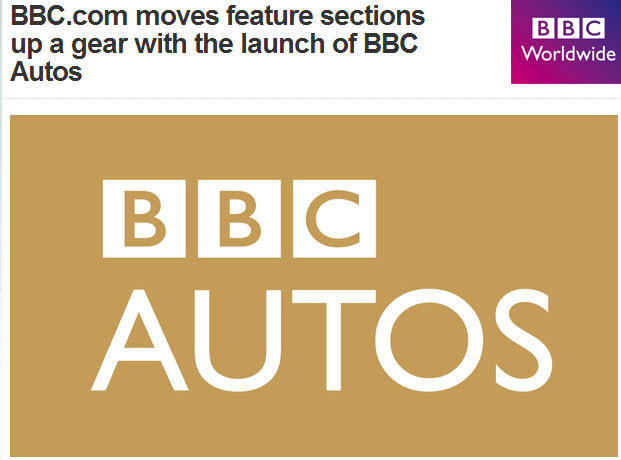 Noticed this text in a BBC press release a few days back
BBC Autos is being produced by a New York-based editorial team under Nick Ascheim, SVP Consumer Digital of BBC Worldwide America, with Jonathan Schultz, former editor of the NYTimes.com ‘Wheels’ blog, taking on the role as Associate Editor.  Simon Hutson, SVP of Digital Development, will steer the expansion of BBC.com’s feature sections across Asia-Pacific and Europe, as well as oversee the development team based in the UK.  Over the coming year BBC.com will continue to build on the number of feature sections it offers audiences outside the UK, ensuring they can enjoy a relevant and engaging take on trends across the worlds of culture, business and wellness.

The launch of BBC Autos will be supported by Cadillac in North America as the lead advertiser.
What is BBC Worldwide up to now? Not satisfied with marketing its own content, it seems to be creating much more commercially sponsored content rather like a production bureau delivers audiences to advertisers. This material can't be used inside the UK (so none of the Bringing the World to Britain functionality that we see in other parts of the BBC).

Personally, I believe this sort of content confuses the global public service image of the BBC. I cannot believe that the sponsors don't influence the content editorially. And I don't see how commissioning content in New York does much to It doesn't benefit any UK producers or Britain in general.

So why make more stuff that is not core to BBC values and mission? Top Gear makes sense. BBC Autos, to me, makes no sense at all.