Watched the grand relaunch of BBC World News over the past week. It's fascinating, especially on the special site that is targeted to potential BBC partners, i.e. TV stations/networks that would like to use the output from London on their station. They're boasting about their fancy new technology at the top of London's Regent Street, home to 6000 staff who man what is claimed to be the world's largest newsroom. You can only play their promo videos on the site itself - no embedding for you, unlike the competition from Al Jazeera, RT, or France 24.

All this, we're told means a "new era of news broadcasting". Its looks slicker, that's true. Bit early to say whether the journalism is any better. But with copy like that, you have to start comparing.


And yet there are striking similarities to the new BBC newsroom with other stations. It looks to me like the new BBC newsroom was built by crossing the colour scheme of Al Jazeera English with the technology that you find in Al Arabiya in Dubai.
Here's the clue to why there is something familiar about all these places. There are only a few people designing newsrooms in the world. And BDA Creative has photos of all these stations as clients on its website. Blue, red and purple seem to be vogue colours everywhere. 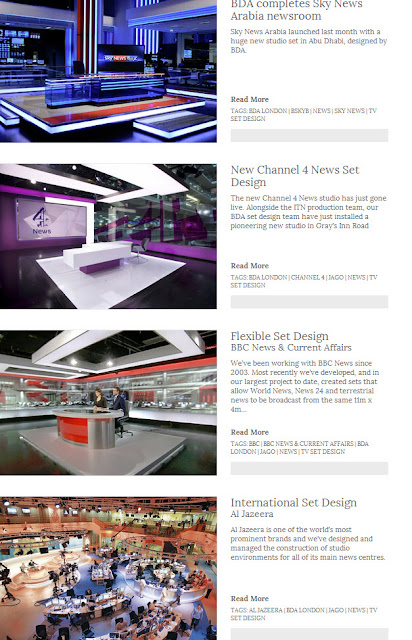 I'm still amazed about all these production people in the studios. Were they there because BBC Publicity were taking photos? Quite a crowd for a news studio. 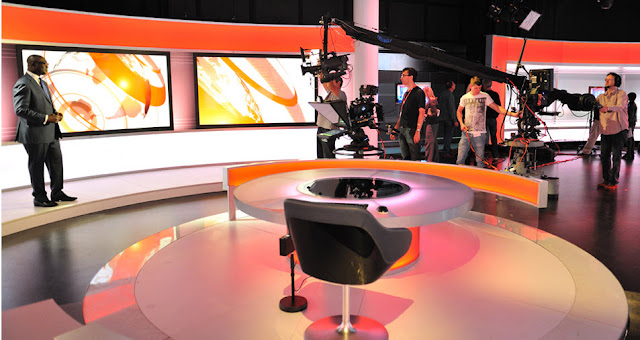 What's my point? For me, the BBC is at its best when it is humble, just getting on with bringing in the best reports from around the world. It's someone like Lyse Doucet explaining a complex situation is a clear way. It's not about claiming "exclusives". Perhaps, because they have been the poor cousin when it comes to facilities for so long, the BBC need the chance to bang the gong a bit. But that backfired on Al Jazeera English in the past. Their promos were so slick at launch that other stations said they were so different in style from what they were putting out locally, that there was no way to integrate AJ programmes into their networks.
The BBC partner site is curious because its aimed at both broadcast partners and advertisers, all rolled into one. That's strange because the sell to distributors is usually rather different. The copy on the home page is for potential advertisers on the BBC Network, not those stations or networks that might be interested in carrying them. 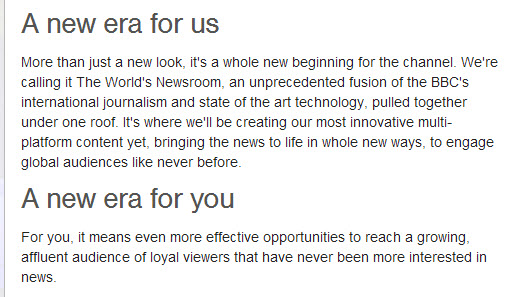 See what I mean?

Update October 4th 2013: I got a very useful response from Stuart Pinfold who works at the BBC and commented:

Your fourth picture shows the BBC Persian TV gallery, in Peel Wing of New Broadcasting House where it has been for over five years. You conclude from this picture that "production teams [at the BBC] seem to be much larger". I'll tell you exactly what all of these people do, from left (furthest away from the camera) to right:
1) Sound Mixer. Balances microphones, VT packages, incoming satellite links, etc, as well as routes audio around the studio and arranges live translations as required.2) Technical Co-Ordinator. Balances the cameras, robotically controls some cameras (to keep the number of camera operators down), deals with studio lighting, routes incoming and outgoing feeds including satellite links, and is the first point of contact for any technical requests.3) Vision Mixer. Cuts the pictures you see on-screen.4) Director. Liaises with the Output Editor (see below), plays packages, calculates timings and ensures the smooth-running of the programme from a technical point of view.So far none of the people above speak Farsi/Persian, the language of the channel. So then we have...5) Output Editor (aka Producer). Speaks Farsi and is editorially in control of the programme, liaises with the Director to ensure the technical team do as required. Checks all material before it goes to air to ensure compliance. Writes suggested scripts and cues for the presenter.6) Text Outputter. Speaks Farsi and is in control of all text on-screen, from the ticker at the bottom, to name captions in packages, and locations for live contributions. Updates and activates these text elements as packages play and as stories develop.The photo of the AlArabiya gallery looks, to me, as if the two people in the photograph are more editorial people, rather than technical people. In other words, they are the equivalent of the Output Editor and Text Outputter in the BBC galleries, and their colleagues doing the technical work are not actually shown in this photo.

Thanks Stuart. If the studio is working in a language other than English, then that does explain why there are more people in the gallery than I expected. And I have a huge respect for what they are doing in bringing important news to Iran. Hopefully, with changes at the top in Tehran, there will less jamming of the BBC Signal.
Posted by Jonathan Marks at Wednesday, January 23, 2013