The Canadian Broadcasting Corporation has a radio programme called Under The Influence. In last week's edition they took a look at some rather innovative radio advertising campaigns. The programme is written and presented by Terry O'Reilly who has built a career in radio advertising.

I was alerted to the January 26th edition because it contains seven rather interesting examples of unusual radio campaigns. Interestingly, none of the examples come from the UK or USA. Several of the examples, make use of a surprise factor. You expect something like a news bulletin from your radio - and you notice when it does something unexpected. Did something similar on Dutch radio a while back, when we organised a series of commercials in English aiming at Dutch with global ambitions. The first (unconscious) filter people use on radio is to select something they can understand. So when the radio suddenly switches language you sit up.

Let me excerpt the examples Terry gave from his radio show. I think they're worth repeating:

There is a music school at the University of Hannover Academy of Music in Germany. It is an elite school for musicians and they wanted to recruit very specific people: Those with "perfect pitch". If you are born with perfect pitch, it means you can identify a specific musical note without any other external assistance or context. If you think that's easy, try it now: Sing an "A" off the top of your head.
Only one in 10,000 of us can do that accurately.
In Europe and North America, some studies suggest that less than 3% of the population can do it. Yet, 98% have absolute colour recognition. That's how rare Perfect Pitch is. So the University of Hannover's Music Department wanted to recruit people with perfect pitch. They did it with this campaign (translated for the benefit of foreign listeners).
Source: YouTube
Because people with Perfect Pitch can identify every note on the musical scale, the Hannover School of music communicated to them in a way only they would understand. It was an ingenious use of radio because it did two things:
One: It gave the school heightened awareness and spoke to the creativity of the school.

And two: This commercial became the first entrance exam. It was a perfect filter. It was a huge PR success for the university.
Sometimes a great television advertising idea has trouble jumping to another medium.
Take the popular television campaign for Snickers, with the theme line, "You're Not You When You're Hungry."
Source: YouTube
This has been a big selling idea for Snickers, and has propelled the candy bar from the #3 position in confectionary brands in the US to #1, surpassing M&Ms and chewing gum Trident.
The campaign idea has worked extremely well on television, using celebrities like Joe Pesci, Richard Lewis, Liza Minnelli and Roseanne Barr. But transferring this idea to radio could be tricky. Yet, in Puerto Rico, they found an ingenious way to do just that. In an idea called "The Day Hunger Took Over Radio," 37 different stations across the island all did something they had never done before.
They started playing music they would normally never play.
So the Rock station, for example, suddenly started playing Salsa, the Salsa station started playing Heavy Metal, the Hip Hop station started playing opera, the Latin station started playing Japanese music and the Techno station started playing country:
Source: YouTube
Each station created chaos, and 3.2 million radio listeners were totally confused - until that is, Snickers cleared up the confusion by airing a personal message that said:
"We apologize for the inconvenience, the DJ is not himself when he's hungry. When he finishes eating his Snickers, we will be back with our regular programming."
It was an outrageous way to get the Snickers brand, and its "You're Not You When You're Hungry" message out to over 3.2 million listeners.
But they did it, and got worldwide press. 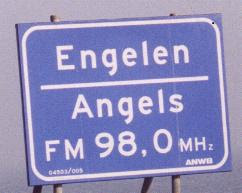 Reminds me of the Angel Radio project in the 1990's here in Holland, which was a special event station that was set up on the bridge over the dike between Enkhuizen and Lelystad. If you tuned to the FM frequency, you heard choirs of angels singing a specially composed piece of music. Especially eery if there was fog on the road.