At Last, a vision for a way forward for US Global Media 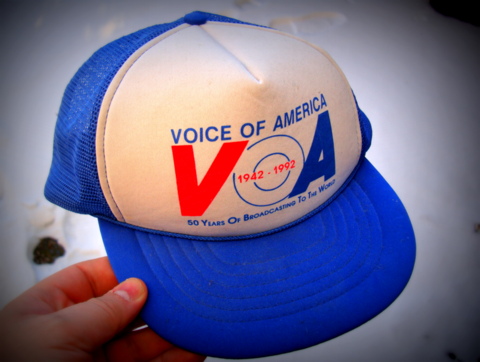 In the current tide of vitriolic personal and very public battles that seem to have engulfed the US Broadcasting Board of Governors, it is refreshing to discover a new discussion paper with a different approach. In fact, it's a 24 page road-map which is a considered contribution to the discussion of where-to-next. 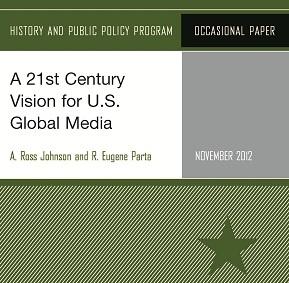 While the content and methods of delivering America’s 24/7 conversation with the world have kept abreast with the 21st century, Wilson Center Senior Scholar A. Ross Johnson and retired Director of Audience Research and Program Evaluation at Radio Free Europe/Radio Liberty R. Eugene Parta argue in their new HAPP Occasional Paper, "A 21st  Century Vision for U.S. Global Media," the organization of U.S. International Broadcasting has not. It doesn't take long to read, especially if you know something about the history of US International broadcasting.


What's Inside the Report?

In summary the report suggests:

United States International Broadcasting (USIB) is at a critical juncture as it faces new, 21st century challenges. This paper proposes a new vision for U.S. International Broadcasting in the 21st century: a single, non-federal, congressionally-funded broadcasting organization that unites the current six entities into one with a revitalized mission employing the latest technologies in an “audiences-centric” communications strategy. This reform will be essential to maintain an effective U.S. presence in an often hostile international media milieu to project American and Western values in support of freedom and democracy.
● New challenges facing USIB include transformed geopolitics in an increasingly multi-polar world, a highly complex international media environment with heightened competition from countries that do not share U.S. democratic values, and new technologies that have transformed the way nations and peoples communicate with each other.
● USIB’s Cold War role as a highly effective tool of U.S. “soft power” in the national interest has been widely acknowledged. Voice of America (VOA), Radio Free Europe (RFE) and Radio Liberty (RL) all made important contributions to the political, economic and social transformation of Eastern Europe and the USSR away from communist authoritarianism.
● The two-pronged Cold War communications strategy of “telling America’s story” (VOA) and providing a “surrogate free press focused on domestic issues” (RFE and RL) is no longer relevant in the new international media environment. Moreover, two USIB organizations, VOA and RFE/RL, have now grown to six (adding the International Broadcasting Bureau, Radio Free Asia, Radio and TV Marti, and the Middle East Broadcasting Network) with overlapping language services, duplicative management and support structures, and largely uncoordinated missions and operations. This hodge-podge of U.S. broadcast organizations, often competing among themselves, can no longer be defended on either mission-related or budgetary grounds and hampers a rational allocation of resources in line with American strategic priorities.
● The audiences-centric mission of the proposed new broadcasting organization is distinct from public diplomacy and from strategic communications. Those useful instruments of American soft power cannot be directly coordinated with USIB if the latter is to be viewed by intended audiences as a credible, objective source of news and analysis and thus justify taxpayer support as enhancing American national security.

I believe an audience-centric approach is the only way forward for international media of any kind. It's not new. That strategy was in the window on one corner of Bush House until the BBC moved out last year. It's a secret lost on government broadcasters, many of whom are focussed on who is paying the bills, and therefore calling the tune. As if the paymasters knew anything about audience needs.


The consistent comparison between Cold War and present is very useful. As a producer of a media show for Radio Netherlands, when it existed, I was always struck at how long Cold War mentalities have persisted in this branch of the business....often decades too long, until it's too late to change.

If you listen to Media Network report below that I produced in 1998 (it starts 3'21 seconds in to the Cutty Sark show) you hear all the same arguments and fears back then, that I heard resurface just a few weeks ago.


As successful as the Cold War Broadcasting model may have been, it is not readily applicable to the
current international media milieu.

There are important differences between the Cold War situation then and the present:

●Present: Both government and private media now co-exist in most countries. Total gov-
ernmental control is rare; even North Korea is becoming exposed to outside information.11
Private media are widespread, although they often focus on entertainment and steer clear of
politics. Digital technologies have created information tunnels to other repressive societies,
including Iran, China, and much of the Arab world.

●2. Cold War: TV, radio, and press were the only media platforms, and of these usually only
radio—delivered by shortwave—could be directed from the outside.

●Present: Word of mouth is now electronic and has the potential to become “viral.” Email,
social media such as Twitter and Facebook, SMS messaging, ubiquitous mobile phone use,
and extensive use of blogs provide new opportunities for lightning-fast content amplification.

●4. Cold War: A general mistrust of domestic media on many sensitive topics was widespread
with somewhat more trust given to foreign media on some key issues, often involving a cri-
tique of official policies.

●Cold War: Strong motivations of publics to turn to outside media sources, usually to avail-
able shortwave radio, to be informed on both domestic and international news.

●Present: Less clear motivations in making media choices, with many available options,
both domestic and foreign. Radio is a less important platform than during the Cold War
in many countries. Internet and satellite technology have now largely supplanted shortwave
radio and the special receivers and antennas and listener patience it required.

●Present: Most, but not all, broadcast target areas are un-jammed, with China, Cuba,
Ethiopia, Iran and North Korea being exceptions. These are the only areas where some inter-
national broadcasting still carries a “forbidden fruit” attraction. Little wholesale blockage of
the Internet takes place anywhere. Selective filtering is more common, but circumvention
technologies and techniques make this increasingly difficult. Regimes that choose to shut
down or filter the Internet often have to contend with the costs of collateral damage to other
vital systems—e.g., banking, business, security.

●6. Cold War: No access was possible to domestic media outlets, such as FM radio, for inter-
national broadcasters. Short wave (and limited medium wave, AM) transmission from abroad
was the only viable platform.

●Present: Growing access worldwide to domestic media outlets, though this access is
sometimes unreliable in practice. The best example is the former Soviet Union where the
number of VOA and RFE/RL FM affiliates has dropped under government regulatory pres-
sure from 97 to 0. The greater the need for local FM broadcasting affiliates, the less likely
they are to be available.

●7. Cold War: Western radio had a clearly defined niche in a restricted media environment in the
broadcast target countries, making it easier to differentiate it from other media to assess impact.

●Present: It is considerably more difficult to gauge the impact of a single medium in a
highly complex media environment. Nearly all audiences, including many inside repressive
countries, have media choices. A single dish, legal or illegal, can routinely bring in hundreds of TV channels and even Internet connections. New methods for determining audience preferences and assessing media impacts will need to be developed to determine the effectiveness of USIB.

What do I think about all this?

Dr Kim Andrew Elliott has added his comments to the paper on his site. I would add a fifth conclusion on page 13.

Commercial media does indeed have an agenda - Its job it to deliver audiences to advertisers. Nothing wrong in that. But there is so much that it doesn't cover.

But there are also public/NFP institutions who are curating extensive knowledge collections relevant to foreign audiences. Rather than trying to do everything themselves, USIB/USIM should be tapping in to these resources through partnering. Especially as a lot of the material is in the public domain. It needs to be professional curated and made accessible. If USIM thought broader than broadcasting, then resources such as FORA TV, Ted.com, MIT, Udacity, Public Library of Science, Smithsonian, Archive.org, Library of Congress, etc suddenly become part of the equation.

USIM would focus on its role in news, analysis and explanation. But it could also be the curated gateway in which people of other cultures get a greater understanding of America's knowledge and cultural role in the world. Whereas a lot of this material is accessible in English, USIM would focus on providing access for selected communities in relevant, local languages. It could put important global issues into context, acting as a catalyst for conversation.

And reasoned conversation inside their societies seems to be what failed governments and extremists fear the most.