Going Dutch can cost a fortune

If you want to trade, you have to speak the language of the customer. Wonder if they will fire Jeroen Leenaers?

Story from FD and the Dutch News.NL today....

Technical services group Imtech angered investors on Monday morning when its manager of investor relations refused to speak English during a conference call on its problems in Poland, the Financieele Dagblad reports. The FD says Jeroen Leenaers told people taking part in the conference call he would only speak Dutch. 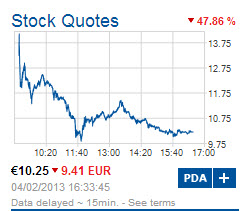 The call was set up following the news that Imtech has taken a €100m write-off following possible fraud in Poland. One analyst told the paper he suspected part of the 50% plunge in Imtech's share price was due to irritations over the language.

The company gave a second conference call in English at 10.30. Around 40% of Imtech's shares are in American hands, the paper said. Dutch investors own less than 20% of the company.

IMtech website is blaming everything on the local Polish management. But what happened at HQ in the Netherlands that this was allowed to go on?
Posted by Jonathan Marks at Monday, February 04, 2013

Email ThisBlogThis!Share to TwitterShare to FacebookShare to Pinterest
Labels: imtech