Definitely not as good as last year. The problem is that they are stuck in the TED talk format and clearly some of the speakers are not very comfortable with speaking English. Talks like the one by GEERT VANDEWALLE, for instance, were painfully slow. He's got a good idea, so why not a short fireside chat - and then do that in Dutch? 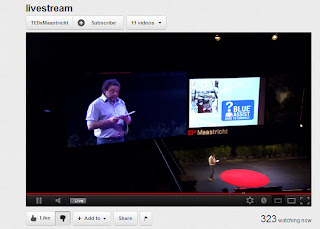 Why bother to Livestream?


I also don't understand why they go to all the trouble for live streaming for just over 300 live viewers. It's worrying if more people are in the audience than at home. Tape them, edit them, and put the best on line. Those who want to network will go to the event. Sorry, but the idea of putting this feed into a cinema in other cities is ludicrous. These remote sites have no way of providing feedback to the main event. Might work for TED at 6000 dollars for a ticket, but not for a TEDx event.  Put the money saved into coaching some of the speakers with brilliant ideas but weaker stories.


I have respect for the organizer, Lucien Engelen. But I wonder if there isn't a reality gap between the reach they think they are getting (50,000 livestreams mentioned at 2'52 in this video) and the numbers on the YouTube counters.

Email ThisBlogThis!Share to TwitterShare to FacebookShare to Pinterest
Labels: #TEDxMaastricht 2012