At 67, Radio Canada International is effectively retired by CBC

Those spending cuts announced last week in Canada's latest federal budget have reached Radio Canada International. Speaking to employees at RCI's headquarters in Montreal on Wednesday, RCI director Helene Parent announced that two out of three RCI employees---about 40 people---will lose their jobs by the end of July 2012. According to the CBC website, RCI will be "transformed" to quote the PR spin. 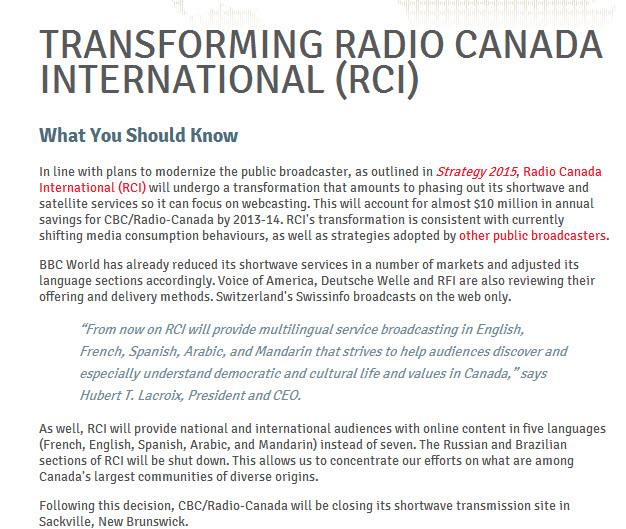 RCI's Russian and Portuguese language sections will be closed along with the English and French-language newsrooms. RCI will have no reporters in the provinces. All shortwave broadcasts will cease as well. RCI will continue to exist solely on the Internet in five languages---English, French, Arabic, Spanish and Mandarin. And the short-wave transmitter site in New Brunswick will be closed. So that puts an end to any transmitter swaps. The RCI Action committee reports that the new budget will be around CAN$ 2.3 million. It's a pity that the official CBC Blog has not been updated in years (thanks to Kai Ludwig for pointing this out) although the Twitter feed with the hashtag #CBC is still working. 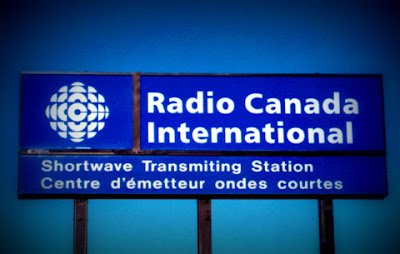 To be honest, I'm convinced there is no longer need for an RCI as a separate offering on the Internet in 2012. It's a rather sad shadow of it's former self, in an era when there was a need for a different context in order to understand what was happening in Ottawa and it's impact on the world. RCI used to make great crafted radio content that complemented what their domestic radio colleagues were doing. It had focus and purpose. But that was more than a decade ago. Now the press blurb speaks of "online content", showing they don't really know what RCI on the web is supposed to share.

Now, nobody searches on the Internet to find out what just happened in Canada - and if they want Canadian news, then CBC or the Toronto Globe and Mail do a comprehensive job. Radio Canada International, without radio, becomes a branding mistake rather than a serious service.

The work that members of the RCI Arabic team did in the 1990's to explain the Gulf Wars to the Canadian public was much more valuable than the RCI Arabic language news broadcasts well after midnight on Radio Monte Carlo Middle East. Why not let them go out in style rather than a wimper?
Posted by Jonathan Marks at Wednesday, April 04, 2012

I could not agree with you more on this Jonathan. I wonder how much of the decision to keep a small handful of people at RCI is just to keep the unions happy.
RCI has not been RCI in a long time. It has been a poor shadow of itself for many years now. I would be really interested to find out how many listeners they have.
And just like you said what is the point of keeping RCI as web based. What is the point of having a website that will only take stories already written and reposting them?
As I said I suspect this is just a way to keep the CBC unions happy.