Japanese public broadcaster, NHK World, continues to be the source of horrific mistakes happening in Japan. The problem is the broadcast network itself just reports about it and there is never any follow-up. I find watching it to be an incredibly frustrating experience. Despite stating (in the FAQ list) that the job of the network is to serve as a "vital information lifeline in the event of major accidents and natural disasters", NHK is long on reporting events and very short on giving us context as to what all this means. Take today's story that 12 tons of strontium-laden waste water has leaked into the sea around Fukushima. We just get a list of what happened. Is anyone doing anything to fix the continuous stream of cock-ups at the Tokyo Electric Power company? Where's the map showing the extent of all the nuclear leaks? What might happen next? Would BBC World News do a similar short report if the leak had been in Sizewell, Suffolk and just leave it at that? By not doing anything to analyse the situation with independent reporters and specialists, NHK seems to be failing on its fifth objective too - to foster mutual understanding between Japan and other countries. My understanding, for the moment, is that Japan can't organize it's nuclear industry and that the government isn't in control of the public's safety. It is talking about restarting nuclear power stations....

To add fuel to the fire of confusion, the Japanese equivalent of the Emergency Alert System failed twice in the tests in Osaka. Reminds me of the US tests last year which were also a fiasco. Again, NHK reports it but fails to mention what's going to happen next. Shame that NHK doesn't understand that the audience can help them distributing the news by allowing video to be embedded. However, that's not allowed it would seem. Clearly, NHK could learn a lot from colleagues at RT . 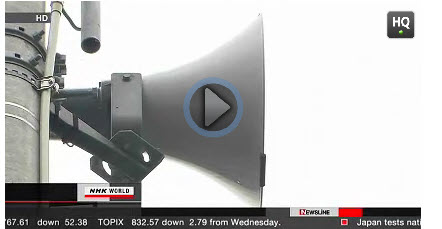