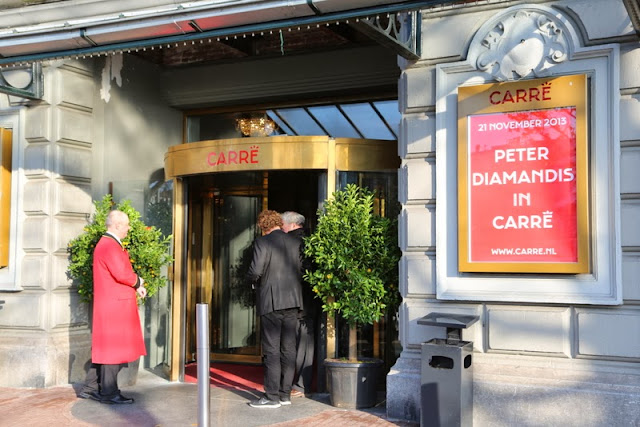 In late November posters went up in the Amsterdam Carre theatre - Peter Diamandis was coming to town, for one afternoon performance only. So what was all that about?   I went along to investigate.

I have seen the first executive director of Singularity University Salim Ismail speak at a Mobile Monday event in 2009 in Amsterdam. I recall that Salim discussed the exponential changes happening in the world and their plans to help companies that planned to change the lives of a billion people. It's a pity that he seems to have stopped blogging since Steve Jobs passed away. His videos are now behind a paywall on the Singularity Hub (It is not an expensive firewall - 48 Euros a year)

The invite to this event came from Deloitte, one of the big four accounting firms on the planet, and Yuri van Geest, who is both a Singularity Alumnus as well as the driving force behind Singularity University in the Netherlands. 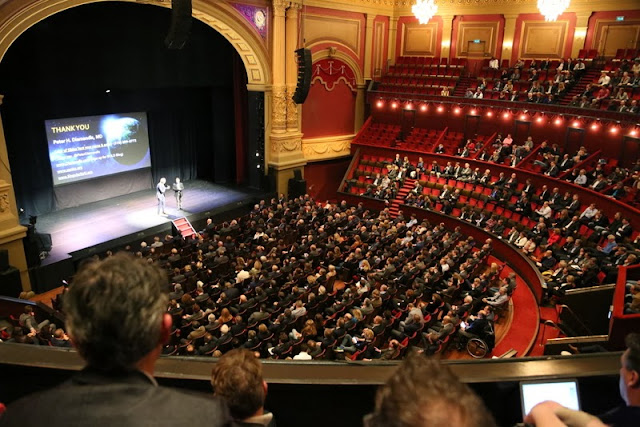 Around 1000 of us sat in the Carre theatre. The lights went down and Business News Radio host Rens de Jong introduced a succession of speakers. Wasilli Bertoen of the Deloitte Center for the Edge chatted with his US colleague John Hagel, explaining that innovation usually happens at the edge of larger institutions first. Agree with everything he said.

David Roberts, who directs the Graduate Studies Program at the Singularity University HQ in California was next. A former US military intelligence officer, Roberts began with a story about visiting Caernarfon Castle in North-West Wales as a young boy growing up in Europe. That instilled a fascination with the technology of castles. If you lived inside the castle you had access to clean water, food, health care (such as it was), education and security. If you lived a day's walk from the castle you had nothing. 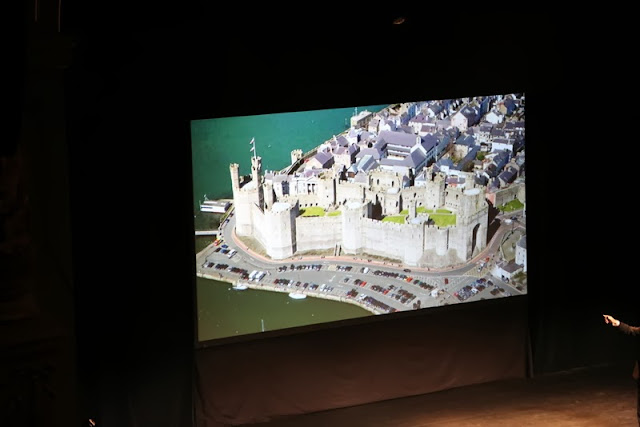 Castles were easily overcome - not by breaking through the defences. But by conquering those who lived around the castle and just waiting. Caernafon was one of the few fortifications who realised that by extending the city walls to include the rest of the town, they were sharing technology with citizens and at the same time building a much stronger defence against distant enemies. Roberts then drew the analogy that fortresses still exist today to show that wall of global grand challenges still exist across the world. Roberts believes the only way to break down these barriers is through sharing disruptive technology.

He gave the example of his father who developed rheumatic fever while training to run the four minute mile. When told he could never run competitively again, he devoted the rest of his life to studying drugs that would kill bacteria making sure that others didn't suffer from the same problem. That involved sharing disruptive ideas about infections, giving back knowledge to others. 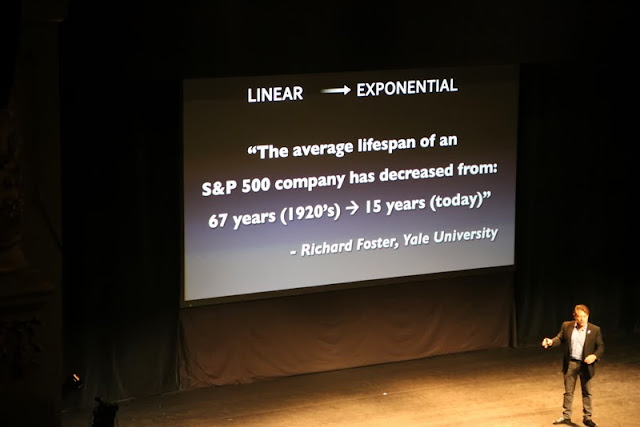 Peter Diamandis then took to the stage with his keynote explaining why they set up this centre to help disrupt the near future, not 50 years from now, but the next decade.

It was at this point that I started to look at SU as standing more for Start-up University rather than the often hard-to-grasp notion of Singularity.(I always understood that singularity describes the moment when a civilization changes so much that its rules and technologies are incomprehensible to previous generations; a point-of-no-return. In fact the explanation of SU seems to have shifted focus. Diamandis heads a team which I see as building a turbo-charged accelerator program. They've clearly examined what's already out there and applied their own theories of disruptive technology to high-tech education. And then multiplied every by 1000. 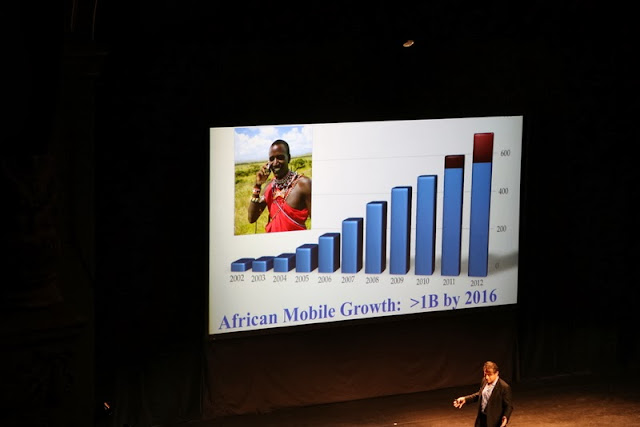 If there is a secret, it seems to be in the way they scour the planet for the best talent. And the business model they use to run it. Anyone can take part in the graduate courses. Either you bring US30,000 dollars for the 9 week programme, or you prove that you can bring or develop a disruptive technology that can change the lives of hundreds of millions of people.

Bearing in mind what one Dutch MBA private college charges for their graduate MBA courses or senior management tracks (22,000 Euro) I'm sure that price has been strategically set. Given the choice of a traditional schooling in Europe or a disruptive startup experience in a NASA hangar in California, the choice for me would be clear.

The other clever invention has been the filter mechanism, reinventing award ceremonies. Here in old Europe, accounting firms, technology companies and even some cities put tens of thousands of Euros on the table as prize money. But, in many cases, these award ceremonies are more for the glorification of the organisers than as a serious catalyst for disruptive inventors. You can't do much with 50,000 Euro and a trophy. 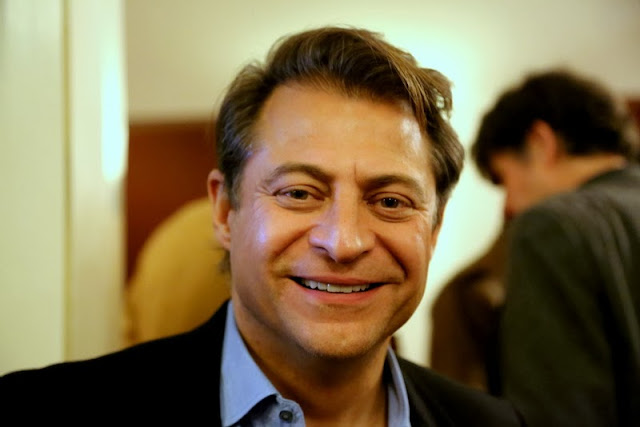 Diamandis started the Xprize which certainly goes a step in the right direction. Come up with a serious challenge and put up a prize of US10 million dollars or more. These large-scale, highly publicized, incentivized prize competitions are designed to stimulate investment in research and development. They trigger processes worth far more than the prize itself. They do exactly what's on the tin. And the publicity is worth 50 times the prize money.

I noticed that Singularity is training the company's it nurtures in building powerful narratives. They seem to be tapping in to the production knowledge from Hollywood, as well as fundraising expertise from KIVA. This ends up with kickstarter and indiegogo projects which break all funding records. Like the Scanadu Scout which raised 1.6 million dollars.

For me, the SU event was an eye-opener, both in terms of how far SU has built a turbo accelerator for young companies and the influence it is having of building company narratives on crowd-funding sites.

The difference is that in SFO, storytelling is seen as an investment.

In the Netherlands we too often regard “making the video” as a necessary PR expense. We confuse pitching with building a company narrative. The problem with our European firework displays of talent is that the impact fizzles out the day after. There has to be a better way. Learning from the example of Singularity University would be a great start.

Who wants to join?