Experimental Lytro drops to US$199 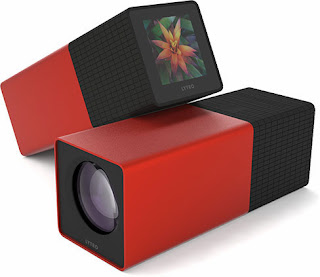 I see the Lytro camera has dropped in price for a few days to UD$199. This isn't a camera for everyone. And if the technology catches on, these cameras will quickly become obsolete. And I would never use it as a primary camera. But if you like the ability of being able to capture now and focus later, it can provide some very creative possibilities. We're now starting to see the results from people who have already played.

There is a lot of information in the "blurred" area of an ordinary camera that gets chucked out because the photographer selects a particular focus point.  Here is the founder's thesis describing the technology https://www.lytro.com/downloads/resources/renng-thesis.pdf. He likens "plenoptic" imaging to replacing a retina with an insect-like compound eye, so the eye still has a single lens, it just directs the rays to a compound eye that can focus and shift perspective on a per pixel basis.Photos are interactive (focal plane, depth of  field), with special software, but exports to JPG are at only 1080x1080 pixels -- very small or low-res. I wish they were wide angle.


I've been told that Eric Cheng, who was Lytro's former Director of Photography until October 2013 is now doing fun videography with drones, building his own rigs for beautiful HD flights in nature. Very smart guy.


Shark Diving in French Polynesia from Eric Cheng on Vimeo.

Not sure why he doesn't mention Lytro on his own page.
Posted by Jonathan Marks at Friday, December 20, 2013