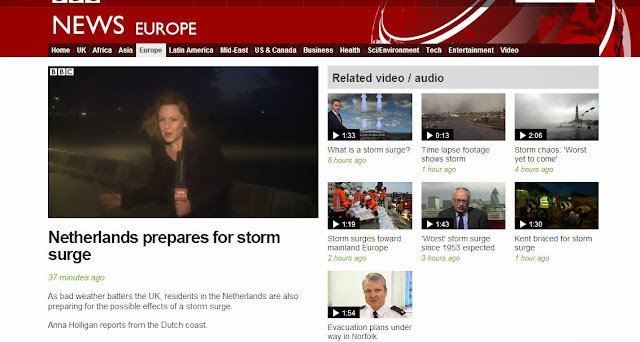 I'm doubtful that sending a reporter down to the beach just to prove that there is a hell of a gale out there does anything to improve the quality of the reporting. Yes, we need to see the extent of damage, but it would also be useful to know what to do. Where is the Google crisis map for this region? Something like this:  https://google.org/crisismap/2013-boulder-floods. We may have built storm surge barriers, but in Europe we haven't got a communications plan anything like the Australians or the US. If I was one of the people evacuated from my home in Great Yarmouth this evening, I would have expected a little more information that offered by the BBC website.

In the Netherlands, we have a website called crisis.nl. The weather bureaux in Holland has been talking about a code red weather alert all day. Would it be worth opening crisis.nl to send concerned citizens in the right direction? Er no.... 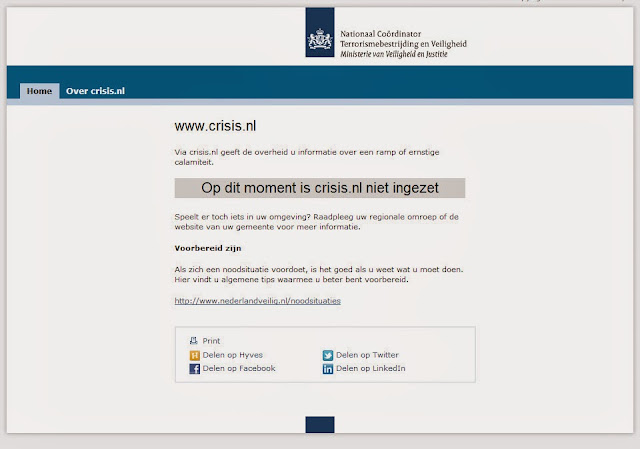 So who really cares?


Let me repost some thoughts I shared at the start of the year.

January 2013 was an important anniversary. It was 60 years since devastating floods hit the Netherlands and the East Coast of the UK. I'm heard all kinds of tributes on local media and BBC's Radio 4 Today programme. There's also a radio documentary below about the flooding, which I made 20 years ago about the 1953 floods.

Above is an artist's impression supplied by the Dutch engineering firm of Arcadis. They are proposing to build a barrier in the Verrazano Narrows between New York's Brooklyn borough and Staten Island, shielding the Upper New York Bay. This barrier would be supplemented by two smaller barriers, one between Staten Island and New Jersey and the other on the East River. Much of the vast destruction wreaked by the storm surge in New York this past week with Superstorm Sandy could have been prevented or reduced with a sea barrier of the type that protects major cities in Europe. But of course it comes with a multi-billion dollar price tag. How do we know? Because Holland was flooded in 1953 and one of the lessons learned was that storm surge barriers were needed to protect against very high tides.

Most people I meet don't realise there are several of these barriers. This was the most expensive to build. The nine kilometre-long Oosterscheldekering (kering means barrier) which was initially designed, and partly built, as a closed dam. But after public protest (especially from the fishing industry) huge sluice-gate-type doors were installed in the remaining four kilometres. These doors are normally open, but can be closed under adverse weather conditions. In this way the salt water marine life behind the dam is preserved and fishing can continue, while the land behind the dam is safe from the water. But this type of construction doesn't allow ships to pass. So for New York (and other large cities near the sea like Rio, Tokyo etc), a different design would be needed.

The Maeslantkering is a storm surge barrier on the imaginary dividing line between the Nieuwe Waterweg waterway located at Hoek van Holland and the river the Scheurlocated along the cities of Maassluis and Vlaardingen up to the confluence of the rivers Oude Maas and Nieuwe Maas, Netherlands).

But what about the costs?

Amongst others, The New York Observer wrote about that this week. The costs are obviously astronomical. It was US$4 billion to build the sea gate in the Netherlands, known as Maeslantkering, or the Maelstrom Barrier, when was completed in 1997. While "twice the size of the Eiffel Tower" sounds big, the Verrazano Narrows is more than three times as wide as the Rhine span for the barrier in the Netherlands, and that's before the two other gates are constructed. The cost could easily surpass $10 billion, likely making this kind of damming gates the most expensive infrastructure project ever undertaken in the USA. This is not simply a Dutch tradition. Following the same North Sea Floods of 1953, the British built a flood barrier in the Thames. It did not open until 1984, at a cost of £534 million, which would be £1.4 billion today, or $2.25 billion.

Have we learned anything?

Frankly, there are still some gaps.


Not playing? Check out the episode here!

But listening to that radio documentary again this week, there was a point which struck me which neither the US or the Netherlands have yet tackled. One of the problems in 1953 was that Dutch villages had few phones, so no-one knew about the pending disaster. How do you communicate information before, during and after such a terrible natural disaster? Media tend to fall into the trap of just reporting it - we see the usual reporters out in the wind. 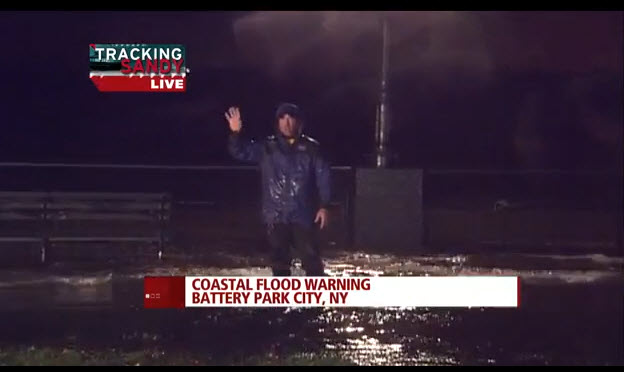 This doesn't convey much useful information, often sending out a false message of security. ("It can't be that bad if they're out with a camera crew"). Where the media totally fails is providing an accurate overview of what happened. The Dutch have spent billions on building infrastructure. But virtually nothing on a cross-media communications plan should huge storms or disasters come this way. And remember that flooding may  well come from rivers in Germany rather than the North Sea.

In that respect, I think the Australians and New Zealanders are way ahead of us. Take the example of the Australian Broadcasting Corporation working with emergency services as well as Google Maps to provide up to date maps of what's still working - where can I charge my phone? Where is the safe drinking water? Which shelters are open and how do I get there? Which transport services are still running? All this means the use of maps, not announcers reading out lists.

It also requires the kind of local detail which demand something better than a "broadcast TV" solution. I'm guessing it's going to be a hybrid solution - a mix of broadcast, mobile and web. And, especially in coastal areas or places where flooding is likely, those services need to be equally reliable. I note in New York that the broadcast services were less affected than the cell towers and Internet providers. But those who argue that we should go back to relying more on broadcast networks ignore the fact that many people no-longer get their information from over the air broadcast networks - or if they do, that content is being delivered over IP technology to tablets, phones, etc. 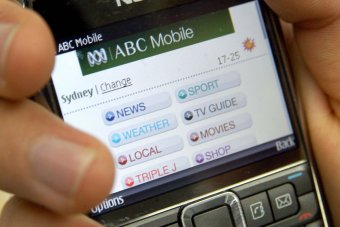 I encourage others to look into the work of US writer John Robb who has written a lot about the threats we face - and what we can do about it. His latest project is called Resilient Communities and offers practical advice on what you can do both prepare and recover. He also summarised the impact of the storm - the tides were higher than predicted - thank goodness there was actually less rain. I liked the recent post on power for instance. John made me realize that my energy provider in the Netherlands doesn't map anything. Their page of outages is a long list of problems. If this were an emergency I would be interested in a map showing where power were still available - exactly the opposite. Likewise, the water company focuses on what's not working, rather than mapping what supplies are safe. I signed up for John's new project which develops Resilient Strategies and publishes them. Much better value than I have seen from the commercial press. I also like the unofficial Google Maps blog called MapsMania showing what others have done to make intelligent maps. 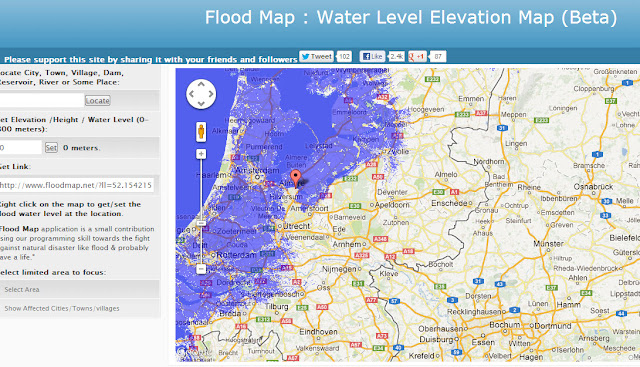 In the Netherlands, the public network Radio 1 is designated as the network to go for information in case of a natural disaster. And one of the 13 provincial radio stations is the place to go if the emergency is regional. Dutch Government websites are poor in explaining. There is nothing in English on their websites for visitors staying in the Netherlands or people who work for international companies but who don't understand Dutch. The Dutch language website refer people to a frequency list (wow!) and a report of a congress in 2002. There is a website in Dutch called Crisis.NL. But, unlike sites elsewhere in the world that use such a site to help you prepare, this site is closed until it's needed. There is a link to another site with tips, but it points out that most of it is in Dutch. Can you read this on a mobile? With difficulty.

We have some brilliant water barriers. And the best water engineers in the universe. But, in the Netherlands, we don't have a public communications plan. We have websites with PDF brochures. Few know they are there. And they are not easily accessible for non Dutch speakers. And that scares the hell out of me.

Doing something like this to correct the problem in your own community? Would be interested to find out more. I recall the great work done in New Zealand by volunteers at community radio stations following their earthquake.