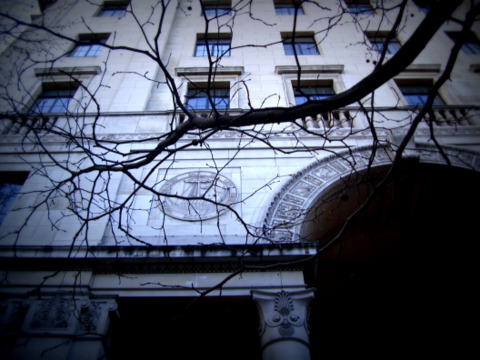 Michael Rosen: Prose poem for BBC Bush House: "
There were times when I was on my own in the studio late at night. Through the glass the producer and the studio manager talking to each other with no sound reaching me. They told me I was recording for the
world. Reading words from inside a silent room that could be heard anywhere. Someone once told me that there used to be a swimming pool in here and behind a curtain there was a grand piano. Upstairs and outside, the buses curved round the Aldwych or streamed up Kingsway; theatres gobbled up queues. I was
talking about books. The two women behind the glass moved like surgeons from console totape to deck. Great writers fell out of my mouth. I coughed. Go back. Redo that para. Centuries pass. Tom Paine. Amy Tan, that sort of thing. And then nothing. I go into the operating theatre. The surgeons look up and nod. I back out. Don't want to breathe on the tape. Coming out. I hope Security don't notice. Oh no, they have. 'One moment, sir. Why have you been in there?' 'I don't know.' Outside, the buses are racing. The drivers know where they're going. The 4 from Waterloo to Finsbury Park."

Nice Poem about recording in Bush House in the middle of the night, so the world could hear.