Defining Radio - It's definitely not this

Woke up this morning to a couple of email's saying I should check out Radionomy, a Brussels based start-up from 2008 who have relaunched their on-line radio platform at an NAB radio event on September 18th. Good job I can understand enough French to work out the press release. Their website is a rather chaotic mix of French and English. They need to fix a lot if they are to have any impact with those who have enough trouble with one language. 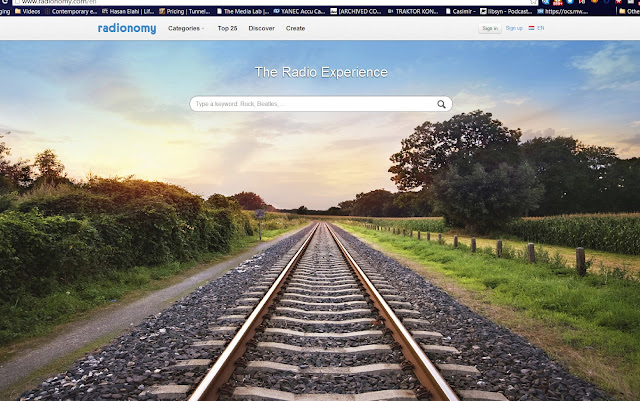 Radionomy isn't radio, at least by my definition. It's a method to create and craft your own playlist of music from someone else's database and stream it to your friends;  in fact anyone who finds your "station" in the directory. Unlike rival Shoutcast, you can craft your playlist, mixing the levels of your music and deciding on the frequency of rotation. We're told there is even an option to inject live content (announcements) into the stream, though with the latency of the web, it will be interesting to discover how that works if you are in New York and the server is in Europe.They claim on the website that there are 6000 such radio stations in the directory of 80,000 songs. In an article published this week, the number is given as 7000 stations.

So is anyone listening? The site shares the following stats. After four years they have at least....

Actually I find the whole thing to be more like Flickr for audio rather than a radio player. You're building collections of music you like so that others can hear.

So why would you want to do that? To start a conversation with friends? I can think of better ways.
Radionomy is a bronze sponsor of LeWeb in Paris. They built a studio at the three day fair and "broadcasted" live interviews back in December 2011. Can we dip into that collection of interviews? Not easily.

So what am I adding of value to the site as a "radio station manager". Actually, it's only a playlist. I don't own the music. If I hit on a winning compilation formula, I can't copyright that mix or export it if Radionomy goes away.


Perhaps you want to make a little money by showing off your compilation or curation skills? In that case you have to build an audience in order to continue to host your compilation for free. Popular "stations" on the service carry 4 minutes of advertising an hour. Radionomy may share the revenue with station programme managers "under certain conditions". The vice-president of business development, Thierry Ascarez, told Evolver.fm this week that can be up to US$5000 a month. But That sounds like good money for programming someone else's radio station - but I guess it is an exception rather than a rule. Personally, I wouldn't give up the day job just yet. For they point out two conditions of use.

So how will they make money? Another part of the site, called Adionomy, tries to explain.

Unlike traditional FM radio, Adionomy lets you precisely target the people you want to reach. Your advertising targets the profile type and geographical location of the listeners you choose. Choosing Adionomy means choosing your target and improving the price per profile per power.

Actually, local FM radio is pretty good at segmenting an audience. Radionomy don't seem to answer the question as to why a (local) business would want to get its message out to listeners all over the world. It was the mistake that Worldspace made. Most radio advertising is to tell you about a product that you'll want to pick up locally. And what exactly is the price per profile per power?

The burn rate of this startup seems to be rather high. In the French language Fast Facts is the statement  that they have "received a total of  6 US$ million to date" to create this solution. Sounds rather a lot to build a database. The money certainly hasn't gone into creating clear marketing materials or a coherent story. When I worked in radio, I quickly learned it was not about the technology. It was about a shared experience between passionate people. It was all about the conversation and understanding an audience need.

I can't find the conversation inside Radionomy. Many of the beautiful cover shots on the home page are strangely lacking people. Which is why, for me,  Radioonomy isn't the radio experience it claims to be.
Posted by Jonathan Marks at Wednesday, September 19, 2012

Radionomy is a fantastic service. The Control Panel is easy to learn and fun to use. My only complaint is that I wish their support forum was better.

Here is my site.. I run 21 stations on Radionomy!