Lotteries work in most countries, even in the worst of economic times. But I confess I have cancelled all my National Postcode Lottery Tickets because I don't agree with the way some of the money raised is dished out again. 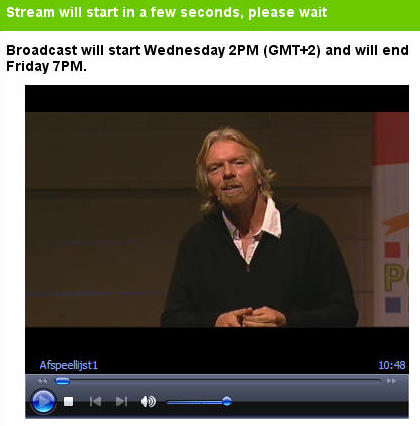 My disappointment really goes back five years when I attended my first Green Challenge competition. In a very poorly organised ceremony, Richard Branson gave away half a million Euro to a environmental start-up. Branson is a great interviewee but an awful keynote speaker. Several people, including myself, tried to persuade the organisers to organise a Fireside chat with the bearded one. But no. There was an empty stage with a rather sheepish Richard Branson on it, sending all the signs of someone extremely uncomfortable with public speaking. Without prompting he dissolved into a mumble. But so much for what happened back in 2007. Fast forward (if you're still using tape) to 2012. 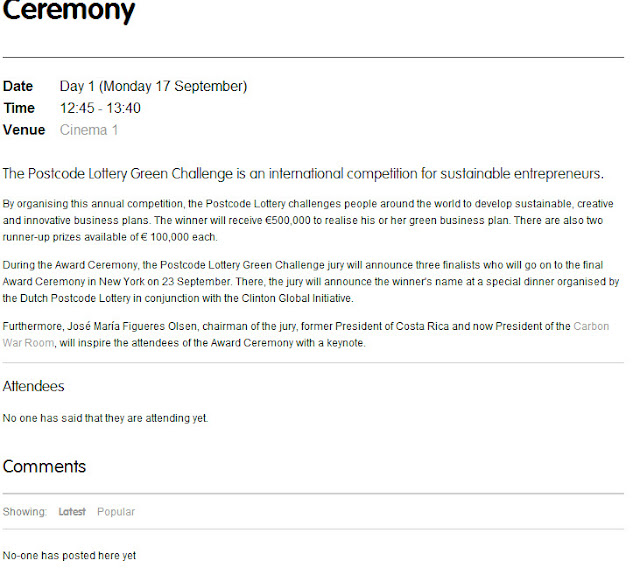 I see that for this year's ceremony, to be held in a brand new cinema complex in Amsterdam Noord, they have replaced the keynote with the former president of Costa Rica, Jose Maria Figueres Olsen. He's a better speaker.

But, as in the past, I bet we never find out what they did with the money and whether it was used in clever ways. Why not 10 awards of 50,000 instead of an obscene amount like half a million Euro?  I haven't seen any examples where a cash injection like that works better than more traditional rounds of seed, Series A, etc funding. Rags to riches is usually a recipe for disaster. Far more interested in the Kickstarter approach or accelerators like Startupbootcamp. In short, the Postcode Lottery could so so much more with the 700,000 Euro they are giving away.
Posted by Jonathan Marks at Friday, August 03, 2012