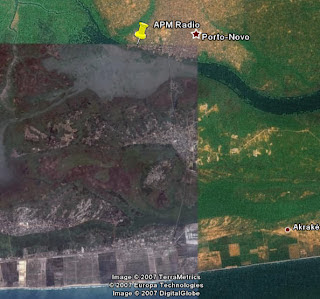 I have been gradually building the website which describes the "making of" a new media lab in Porto Novo, Benin. Located in the western part of the capital city, the new website explains how we managed to build a complete FM radio station in under a day towards the end of July 2007. The idea is that the "lessons learned" will be translated into local languages so that station managers are able to profit from our experiences. It costs around 25,000 Euro to build a community station of this type. If you want more range, then prices quickly climb to 40,000 Euro. The local versions of what we did will be distributed on USB memory sticks which are rapidly replacing CD's for transporting audio files around the country. ADSL is due in Porto Novo in January 2008, but it is still relatively expensive.
Posted by Jonathan Marks at Sunday, October 21, 2007