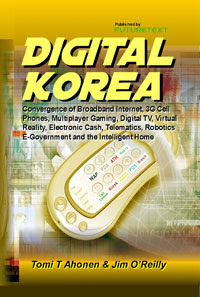 I don't often mention books here, but this an exception. I just bought a booked called Digital Korea by Finnish author and consultant Tomi Ahonen. He lives in Hong Kong, although I saw him in Amsterdam during one of his tours through Europe. He stood quietly at the back of the former Odeon cinema where Mobile Monday was being held. He had the task of grabbing the audience back from the bar since he was the second speaker that day and the first half had been "so-so", good ideas but poorly presented.

It didn't take Tomi long to ignite the crowd and get them all back in their seats (200+) and spellbound. Why? Because he confirmed a lot of what we suspected about the digital revolution. But he put them in a great context and simplified the "jargon". His thoughts are building on a paper he published a few years back showing how the mobile phone has emerged as the 7th Mass Media. "It is as different from the internet (6th Mass Media) as TV (5th) is from radio (4th). Trying to force concepts from the internet, TV, or other previous media will produce disappointing audience experience on mobile. But understanding the unique power of mobile as
the 7th Mass Media will deliver radical new concepts and new winners on this, the newest mass media."

His latest book called Digital Korea and examines why South Korea has forged ahead with connectivity that people in Europe can only dream of. It is a country where 100 Mbit/s speeds are already sold and gigabit speeds already coming; where every phone sold is a cameraphone; where three out of every four mobile subscriptions is a 3G connection; where cars and PCs and mobile phones now ship with in-built digital TVs; where 42% of the population maintain a blogsite and four out of ten have created an avatar of themselves.

What is different about Tomi is his ability to share information - encouraging people to take part in the ForumOxford not only to share his notes, but also contribute to the conversation. He radiates enthusiasm and is happy to share ideas. At last a group of people looking at the social impact of mobile as well as what that means for the technology. CNN ran a feature on his this past Sunday. Here's the link which seems to work at the moment.
Posted by Jonathan Marks at Tuesday, October 16, 2007