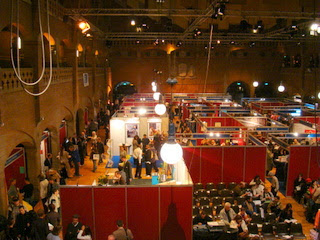 I have been to several of the annual "expat" fairs held in the former stock exchange in Amsterdam. This year the fair seemed to be a little quieter than previous years (perhaps it was the nice weather) or that the number of English-speaking immigrants-contract workers into Holland is dropping. But Expatica, the organisers, said their numbers for subscribers are infact going up, with around 20,000 regular readers of their expat website. The main hall is full of people who will transport your stuff, find a house for you, or help you with the nightmare that is called the Dutch tax system. I sensed the general level of complaints from expats is on the rise, a feeling that a lot less of official information is available in English (or not updated). A volunteer group called Access also provides follow-up after the move to the Netherlands, at the point at which the removal guys or the estate agent feel they have finished the job. That's often the point that many expats feel extremely lonely, especially if they have not mastered enough of the Dutch language.

It is my opinion that Rotterdam and Den Haag are doing a much better job of helping expats than Amsterdam. There was an "I Amsterdam" sign in the hall yesterday, but no welcome stand or message from the mayor's office that you find in cities like Bonn or Oslo. Some stands were clearly trying to recruit foreign-language personnell. A lady on the Tom-Tom stand said they have 140+ positions open at their HQ in Amsterdam. A little further down the hall was a rather prominent stand from Alcoholics Anonymous. Don't get me wrong, I am sure they do great work. But the anonymous bit was a misnomer in this case. Also missing was a stand from the only English language radio show in Amsterdam, the English Breakfast. But luckily, these guys are getting more and more airtime on the radio here and via the web. 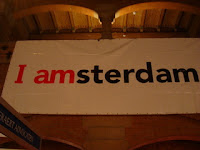 Email ThisBlogThis!Share to TwitterShare to FacebookShare to Pinterest
Labels: Expatica