Journalist LOUISE FLANAGAN writing in the Star newspaper in South Africa breaks some very disappointing news. The South African government is going ahead with plans for a state-owned and controlled "internet radio station" which will be available through the web to listeners around the world. They are looking for radio experts to set it up and run it – following government instructions. From Louise's article....
The station is a Department of International Relations and Co-operation project.
“The established internet radio station will be fully owned and controlled by Dirco. Dirco will be responsible for providing programming and editorial guidelines,” said the tender, which closed last week.
Effectively, this makes it South African government propaganda. The Star asked the department to explain the need for this.
“The station will be of a talk-show nature and will rely mainly, but not exclusively, on government-generated content. The station will also solicit various perspectives from independent foreign policy role-players, including analysts, for its programming,” said department spokesman Nelson Kgwete.
“Editorially, the station will provide a platform from which the South African government can communicate its foreign policy priorities and programme, including achievements and challenges, to a wide international audience. South Africa is an influential player in the African continent as well as across the emerging world. The formation of the station is in line with South Africa’s responsibilities and ambitions in the foreign policy front.”
Kgwete said the government already uses available radio platforms to communicate.
“We are merely creating a platform that will be available to us around the clock and involve all our missions across the world. The government is often accused of not communicating enough – this platform will bridge that gap,” he said.
The intention is to have a continuously broadcasting station and provide radio skills to Dirco staff.
Whoever runs the station will “be required to work with Dirco’s public diplomacy branch in the development, production and streaming of the radio programming”, said the bid document.
Broadcasts will be in English, and the target audience is just about anyone.
So why is this disappointing? Because all the independent evidence from the recent past shows that governments, especially public diplomacy departments, make really lousy broadcasters. They are shouting into the Internet, when the world has moved on to conversations and debate. I'm sure someone will make money training these government officials to present. But it's doomed to fail because they have forgotten one thing - how will they be credible when they haven't defined the audience? One look at the government website gives you some idea of the exciting stuff we can expect. 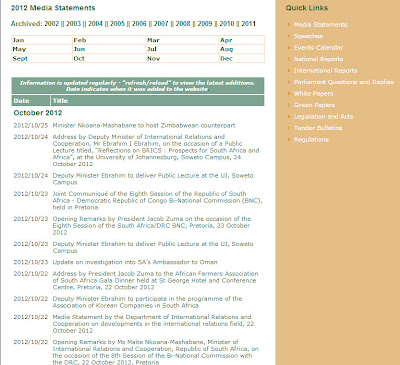 All this reminds me of the statement by the Dutch government last year that they thought they had far more effective tools to communicate Dutch foreign policy to the world than Radio Nederland Wereldomroep.

Thanks But No Thanks.

In a press conference on Friday 17th June 2011, Prime Minister Rutte basically thanked Radio Netherlands for their efforts so far, but concluded that national image building abroad and calamity services are being done by others already. This form of public-financed publicity is a luxury the Netherlands can no longer afford, partly because it’s so difficult to independently measure its effectiveness.

Now, there were a lot of things wrong with Radio Netherlads towards the end, but credibility and editorial independence was never an issue. A glance at the Dutch government website reveals that the English language website runs office hours, usually a day behind what the Dutch language site is saying. Does anyone read this? May be we should put in a freedom of information request to find out the official figures and the cost per reader? The Netherlands used to have influence in foreign media well beyond the size of the country. But that's rapidly disappeared because now "we have the Internet".
Just hope the South African government can be quickly persuaded that this is a really awful way to win respect, credibility and trust from listeners abroad. There are plenty of reports to show it will be disaster. Wonder what they will call it? How about Radio RSA? May be not. Perhaps history is repeating itself.