Few people know that Ottringham, a village near Hull in the UK was the home of many of the BBC’s broadcasts during the Second World War, and that its transmissions were received well into the heart of occupied Europe. The site was intended to broadcast both medium and long wave services to counteract propaganda coming from Nazi occupied Europe. Today the site of the old transmitter site is an engineering works and the fields where the antennas stood reveal little of their radio past.


This article below was published on the BBC Local radio website of BBC Radio Hull on 28 October 2008. It was written by Dale Baxter. That part of the website now is dormant.
Before the construction of the Ottringham transmitter site the BBC used existing sites at Daventry, Droitwich and Brookman’s Park for broadcasts to the UK and occupied Europe. However these sites were only ever intended to be used as a temporary solution since the antennas were built with domestic coverage in mind. Ottringham was selected, and was soon the centre of the BBC’s wartime broadcasts.

Ottringham is a village and civil parish in the East Riding of Yorkshire, England, in an area known as Holderness. It is situated approximately 12 miles to the east of Hull city centre and 5 miles south-west of Withernsea.
With a combined output power of 800 kiloWatts on both long and medium wave, BBC Ottringham or O.S.E. Number 5 as it was called was the most powerful transmitting sites in the world during World War Two. Four transmitters operated on the site, with one relaying the Home Service, now known as Radio Four to the East Riding and Northern Lincolnshire throughout the war.
Only a select group of people worked at the highly secure site, Grace Magee being one of them. Mrs Magee now lives in Northamptonshire, but can clearly remember her duties and what the site looked like. “There was a large office block. There was an office for the Engineer in Charge, another for the assistant Engineer in Charge and the general office where I worked. There was store cupboard in the office block; a very well equipped kitchen ran by a cook and an assistant, with a nice canteen supplying meals for the staff. A large power house and operating system, with three diesel generator sets in case of power failure was very, very noisy.” 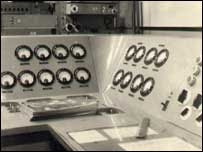 Control room
Aerial masts 500 feet high towered up in the sky. The station was frequency agile, changing wavelengths so so as to avoid German jamming. Engineers manned the control room desks which were a maze of dials and switches, monitoring all the programmes, the timing of which was most important.
The station had a guardhouse, with guards on duty and ID passes had to be shown before entering. Anti-Aircraft camps surrounded the BBC compound for protection against German air-raids.
A BBC Club was provided in Queen Street, Withernsea, with games rooms, snooker tables etc. A bus was used to take the engineers into Ottringham for the day, evening and night shifts, as most of the staff lodged or lived in Withernsea. 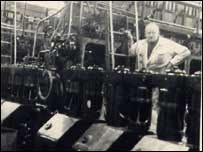 An engineer monitors the equipment
BBC Ottringham was not abandoned for some time after the war. The station actually transmitted until the 15th of February 1953, closing down as wartime services from the BBC (such as the BBC Dutch Service) went off the air.
Shortly after closure the transmitters, like much of the equipment, was re-used at another site. The transmitters were moved to a new site in Droitwich where they broadcast BBC Radio 1 and Radio 4 on medium wave and Radio 2 on long wave until well into the 1970’s, when the Droitwich site was updated and re-equipped with new more modern high efficiency transmitters.
The 95-acres and 38,000 square feet of buildings were sold to a local farmer on the 25th of June 1959, for just £5,100. So what has become of the site now? Well, the control centre, now unrecognisable, due to the new cladding is now home to a company called Servaccomm who make modular building units.


Thanks to John Clappison for kindly supplying photographs.

Tests at the site started on 22nd January 1943 and the station finally came on line on 12th February 1943 six months late after two of the 500 foot masts collapsed during construction work in August 1942. This later opening disappointed BBC engineers as they were competing for completion with "Aspidistra" at Crowborough in Sussex, which was under construction at the same time. Although used by the BBC, Aspidistra wasn't owned by the Corporation being owned and used by the government to broadcast black propaganda coming from Milton Bryant near Bletchley. More details about Crowborough in the Wartime Deception programmes I made.

The station had a maximum power of 800 kilowatts either on long wave or medium wave and at the time this was the most powerful transmitter in the world. 4 200 kilowatt Marconi transmitters were installed in four heavily protected surface buildings, possibly with earth revetments. These were driven and fed with programmes from a 5th building (the Control Centre) while the 6th building was the Central Combining House which contained the circuits to combine 200kW at a time for the LF service to a maximum of 800 kW output.

Although the station was tested to 800 kW output, it never run on programme to that level, 600kW being the maximum used. The station was designed to broadcast with 200, 400, 600 or 800 kilowatts with up to four separate programmes simultaneously. The fourth transmitter was used to relay the Home Service (Radio 4) to the East Riding and North Lincolnshire. The final building on the site was a standby set house with 3 X 740 bhp diesel alternator sets. (There was also a garage and a sub-station)

The site of the aerial masts in Ottringham has now been returned to farmland while the transmitter site has been cleared of all buildings. A new industrial unit has been built at one end of the fenced site while the rest is a storage yard and lorry park.

I learned about the broadcasts from Ottringham from a different angle. It was during my first attempt at making a mini radio documentary, being 23 at the time. I had joined Radio Netherlands, the Dutch external services (Radio Nederland as it was then called) the year before.

In July 1981 I got an interview with the late Professor Lou de Jong (he died in 2005), who worked at Radio Oranje in London during the war. Alongside the BBC Dutch Service broadcasts, there was time allotted to governments in exile. Before doing the interview, I did quite a bit of research into what happened at the offices in Stratton Street, London.

Lou de Jong was a bit stiff to start with. He was testing me to see if I had really done my homework or just wanted a sound clip for something else. I told him I was fascinated in broadcasting history and really wanted to find out what it was like to be a broadcaster in those difficult times, especially working for the Dutch government in exile. So he began to really enjoy telling the story even though it must have been the hundredth time.

The Dutch government had a 15 minute slot in which they could beam their message back to occupied Holland, but also, as it turned out by looking at the schedule, to the Dutch East and West Indies. The entire scripts of the transmissions were in the archives of Radio Netherlands building (since the station grew into Radio Netherlands in 1947) before being donated to the National Archives. The original programme was broadcast in two parts, which explains the strange length. More details on the Dutch Institute for War Documentation is here.


We also made a programme about Radio Hilversum during the war years under Nazi Occupation.

After the war, those behind Radio Oranje later went on to found what became Radio Netherlands. The BBC Dutch radio service closed down when it was clear its mission was over in 1957. Below is the final broadcast in Dutch which contains a look back on what was achieved.