Thomas Rosenboom and the Swans 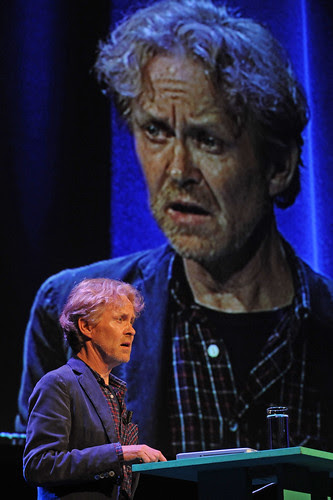 Thomas Rosenboom on stage of PINC.13, a photo by PINCNetherlands on Flickr.
Thomas Rosenboom surprised us all at PINC 13 with a story about his observations from his apartment window. He noticed that the swans in the city seemed to trapped on the canals because the space between the bridges is not wide enough for them to gather enough speed and take off.

“A truly remarkable book, in the tradition of great authors such as Vestdijk and Nabokov” – is how one Dutch reviewer characterized Thomas Rosenboom’s Gewassen vlees (Washed Flesh, 1995). The author had previously displayed his talent with the collection of his short stories De mensen thuis (Those at Home, 1983) and the psychological thriller Vriend van verdienste (Honourable Friend, 1985), but the true breakthrough came in 1995. “It sings and blares, it rumbles and raves, it hums and hisses,” is how NRC Handelsblad described Rosenboom’s virtuoso command of the Dutch language.

The following year, Gewassen vlees won the prestigious Libris Prize for Literature. His fame and ability were set in stone in 1999, when his new novel Publieke werken (Public Works) garnered even more acclaim and Rosenboom won the Libris Prize a second time – an unrivalled achievement. Since then, the ever-modest author has worked on his oeuvre with evident joy, publishing two more wonderful novels, De nieuwe man (The New Man, 2003) and Zoete mond (Sweet Mouth, 2009). In between, he wrote the 2004 booksellers’ gift Spitzen, as well as a razor-sharp analysis of Dutch society titled Denkend aan Holland (Thoughts on Holland).