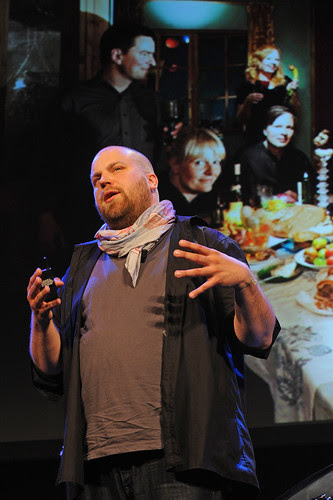 Food Visionairy Antto Melasniemi, a photo by PINCNetherlands on Flickr.
"The essence of a good restaurant is not just in the food," says Finnish chef Antto Melasniemi. "You also need to think and breathe the tools of design into the whole concept." The former rock pianist now runs three restaurants in Helsinki: Ateljé Finne, Kuurna and Putte's Bar & Pizza. Outside Finland, Melasniemi gained renown with his pop-up restaurant HEL YES! serving Finnish cuisine and design at the London Design Festival in the summer of 2010. Visitors were served simple, pure dishes in an ambiance where Finnish design and recycling met in pleasant symbiosis. The HEL YES! Stockholm event was combining restaurant with contemporary dance.

Another eye-catching project was the Lapin Kulta Solar Kitchen restaurant, which Melasniemi created together with Catalan designer Martí Guixé, touring Europe in the summer of 2011. This environmental and gastronomic art project, launched at the Design Week in Milan, demonstrated how cooking with solar heat had a surprising influence on the taste and texture of food. This project also demanded the flexibility and ingenuity of the cooks, especially on days when the sun refused to shine.

Melasniemi's new project for the Helsinki World Design Capital event is an open space at the meatcutting district of Helsinki that will host different food culture events.