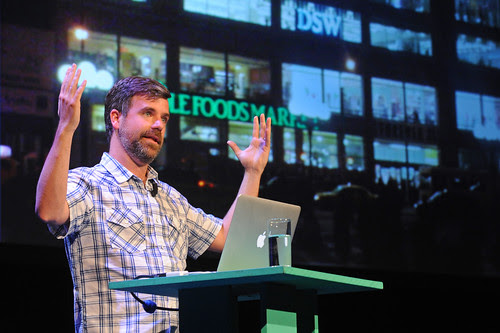 Charlie Todd on stage of PINC.13, a photo by PINCNetherlands on Flickr.
As adults we need to learn that there is no right or wrong way to play," says actor and comedian Charlie Todd. The strangest things happen when he’s around. A group of bathers in full evening dress take over the beach on a hot day; a busy mall becomes the backdrop to a spontaneous musical; and some of the people on a busy square seem to have a mute button.

One of his latest "flashmob" events was with real quadruplets in Central Park.

Todd is the founder of Improv Everywhere, a New York collective that brings the strange and absurd to public places. The group has undertaken more than 100 missions since 2011, involving tens of thousands of 'undercover' agents. From a fake U2 concert and no-pants subway rides to a book-signing event by a dead author – the group’s surreal performances cause all sorts of confusion and lots of laughter. I note his YouTube channel has over a million subscribers.

Apart from being the driving force behind Improv Everywhere, Todd also performs with the Upright Citizens Brigade Theatre in New York. His book 'Causing a Scene' gives a hilarious insider account of the jokes Todd and his group have pulled over the years. His motto: "You don’t need permission to be creative." My favourite is still the stunt their did with frozen statues in Grand Central Station.