All the traditional international broadcasters are refreshing their websites in the on-going race to retain audiences and try to grow them. Not many broadcasters are used to a dialogue with their audiences. Sometimes political restrictions have made that impossible. But more often that not, these broadcasters are so used to shouting their message across borders with 500 kW transmitters that they are trapped in their own routine. I have always found it difficult to have a conversation with someone who is shouting. Perhaps impossible is a better word.

One of the several US international broadcasters, the Voice of America, seems to be trying. I note they have just relaunched their website. For the first few days this week a banner at the top invited comments on twitter and in their forums. My comments won't fit a tweet. And now that the offer has disappeared from the homepage, I thought I'd publish the thoughts here and send them in to see what happens. 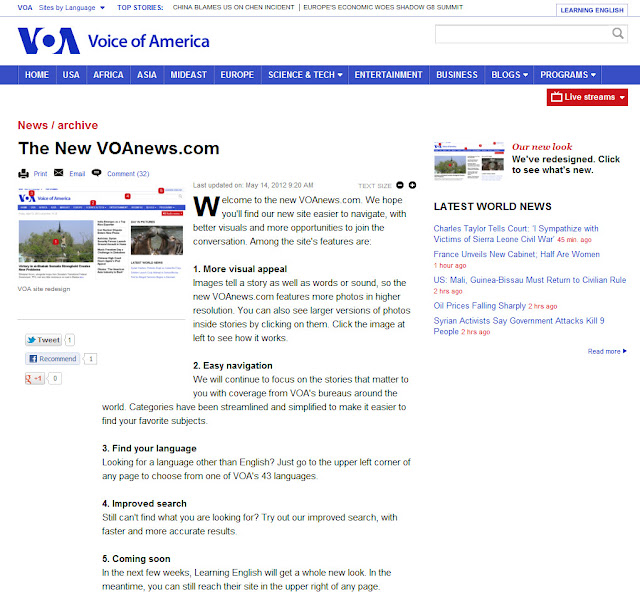 Frankly, I don't think the relaunch is ready. Although it's a start and on the right lines. It's certainly not ready for prime time. I do feel that they have re-jigged a legacy content management system rather than rethinking how they will integrate social media into the mainstream offering.

I always think of on-line publishers like Flipboard and Zyte as leading in interface design. They know that layout needs to respond to the size of the screen being used - and that could be anything from a iPad, Android device to a Windows phone. And goodness knows the size of the screen if the viewer is using a web browser. Which is why even simple Wordpress designs adapt to the screen you're using. Plenty of Universities get it, as do many others. There are pages of examples out there. So what's stopping the VOA from being ahead of the pack and adapting to the needs of a fragmented audience?

There are apparently two new VOA sites. One for the web - and a version (if you look hard enough) designed to be accessed on a mobile phone.

I have often regarded VOA as a talking newspaper. Why? Because it's in earlier documents and programme schedules, VOA would always explain its radio editorials (reflecting the policies and views of the US government) as being rather like the opinion column of a newspaper proprietor (in the days when they did that kind of thing).

A separate department within VOA still publishes daily editorials, although I am at a loss to understand why they were ever branded as VOA Editorials. I've always thought of them as a "word from our stakeholder" and quietly done something else while they were running. I note that some language departments would schedule the VOA editorials at the end of their feeds to stations, knowing that few would carry them in their rebroadcasts of VOA - because they only represent a single voice from America.

Has anyone looked at this site on a tablet in the form that Flipboard uses? It doesn't work too well. And wouldn't it be great if the radio and TV programmes, which still consume a lions share of the US$206 million that was pumped into Voice of America alone this year, were also accessible in an app that looks like VODIO (check the Apple Store for the free app) ? Competitors Bloomberg Television, Reuters and Indian NDTV all have stunning apps which put audio, video and text into a much more attractive context than VOA. All three do it commercially.

VOA Radio and TV - an afterthought?

Although IP is now leading at VOA, as in most broadcasters, the VOA radio and TV broadcasts have been relegated to sidebars. I would put listen live as a permanent top menu bar, with larger links to radio, TV and on demand catalogue of content across the top. They are not an afterthought. They could save screen real estate by eliminating the top line (with the breaking news bar) and the menu switch to other languages. Incorporate all of that in the menus lower down. There are two VOA logos at the top of my screen. Why?

International broadcasters used to be champions of realising that there are different time zones - and that we're often enjoying the shared experience of listening or viewing at a different time (or even a different season). GMT and UTC was our reference. But, even if that is old fashioned, time mentions on the new VOA site are confusing. The side bar says a story was published 11 minutes ago. On the page itself it says today's date, but not always the time of publication. I would definitely add the time the story was released (or updated) and state that it's Washington DC time. Otherwise the logo Breaking news says Broken News to me. If I can't trust VOA to tell me the correct time, what can I trust them with. Have they thought of a clock on the site marked Time Now in Washington? 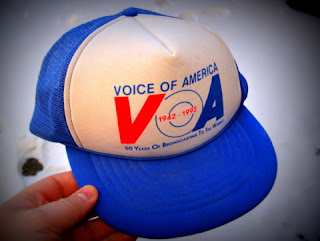 Just before Water Isaacson departed as Chairman of the Broadcasting Board of Governors, one of his parting remarks that he was pleased VOA was restoring its original colours. On the new site, why not give us back the old three coloured VOA logo and be more conservative with the use of red further down?  Black, blue and white . Red perhaps for a breaking story, but not for "11 minutes ago".


Other points that caught my Eye


And finally, I believe listeners and viewers to the English language lessons have lost their way in the cave of wonders. What is EnglishCentral trying to achieve? Can we assume that experiments like VOA Congo Story were simply experiments and are now abandoned in cyberspace? So much still isn't finished. I hope audiences will have the patience to stick around while the virtual scaffolding is still up?