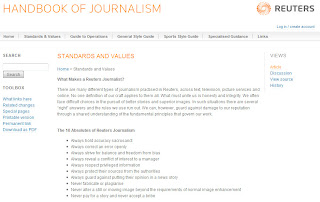 In the past, the BBC has made copies of its Editorial Guidelines for Journalists available during training sessions in other countries. Now that they've set up a journalism training school, they have opened up their training to different sectors too with projects like the 21st Century Classroom.

The news agency Reuters has also been training journalists from the press in developing countries though its non-profit arm. They have now released their guide to good journalistic practice here in the spirit of improving standards. It's definitely food for thought. I think many broadcasters would do well by leafing through, especially the section on standards and values. They are too often "void when inconvenient".
Posted by Jonathan Marks at Friday, July 10, 2009